Seinen manga (青年漫画) are Japanese comics marketed toward young adult men. [1] In Japanese, the word seinen literally means "youth", but the term "seinen manga" is also used to describe the target audience of magazines like Weekly Manga Times and Weekly Manga Goraku which cater specifically to men's interests, and are marketed towards a demographic of older teenage boys and adult men between the ages of 18 and 45. Seinen manga are distinguished from shōnen manga which are for younger teen boys, although some seinen manga like xxxHolic share similarities with shōnen manga. Seinen manga can focus on action, politics, science fiction, fantasy, relationships, sports, or comedy. The female equivalent to seinen manga is josei manga.

A common way to tell if a manga is seinen is by looking at whether furigana is used over the original kanji text: if there are furigana on all kanji, the title is generally aimed at a younger audience. The title of the magazine it was published in is also an important indicator. Usually Japanese manga magazines with the word "young" in the title ( Weekly Young Jump for instance) are seinen. There are also mixed shōnen/seinen magazines such as Gangan Powered and Comp Ace . Other popular seinen manga magazines include Weekly Young Magazine , Weekly Young Sunday , Big Comic Spirits , Business Jump , Ultra Jump , and Afternoon .

One of the earliest manga magazines published in Japan was a seinen publication: Weekly Manga Times , first released in 1956. It was aimed squarely at middle-aged men, featuring erotic fiction and manga and tales of yakuza. It was only in 1959 that two of the main shōnen manga titles appeared: Weekly Shōnen Magazine and Weekly Shōnen Sunday . Then in 1967, the first of the magazines aimed at younger men appeared: Weekly Manga Action , which scored big hits with Lupin III and Lone Wolf and Cub , and later Crayon Shin-chan . Big Comic followed in 1968, perhaps best known for its series Golgo 13 . The year 1972 saw the addition of Big Comic Original , which featured Tsuribaka Nisshi , a manga about two older men who enjoy fishing; the manga was made into a series of popular movies. In 1979, the publisher Shueisha, known for Weekly Shonen Jump for teen boys, entered the seinen market with Weekly Young Jump . Many Young Jump series have been adapted into anime or live action TV programs, e.g. Elfen Lied , Gantz , Hen , Kirara , Liar Game , Oku-sama wa Joshi Kōsei , and Zetman .

A list of the top Japanese seinen manga magazines by circulation in the time-span from 1 October 2009 to 30 September 2010. [2] 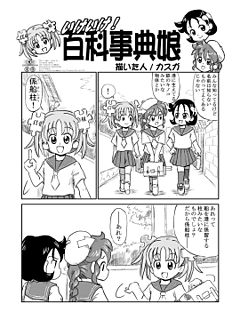 Manga are comics or graphic novels originating from Japan. Most manga conform to a style developed in Japan in the late 19th century, and the form has a long prehistory in earlier Japanese art. The term manga is used in Japan to refer to both comics and cartooning. Outside of Japan, the word is typically used to refer to comics originally published in the country.

Shōnenmanga (少年漫画), also romanized as shonen or shounen, are Japanese comics marketed towards young teen boys in junior high school to high school age. The age group varies with individual readers and different magazines. The kanji character 少年 (shōnen) literally means "boy" or "youth", and the character 漫画 (manga) means "comic"; thus, the complete phrase means "young person's comic", or simply "boys' comic", with the female equivalent being shōjo manga. Shōnen manga is one of the most popular and best-selling forms of manga.

Josei manga are Japanese comics catered specifically to women's interests, and marketed towards older teenage girls and adult women demographics who are able to read kanji without the aid of furigana. Subgenres of josei manga include "ladies' comics" or "lady-comi". Readers can range in age from 18 to 45. 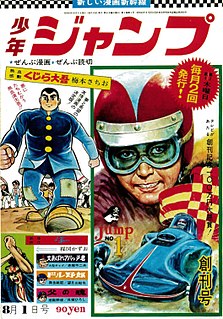 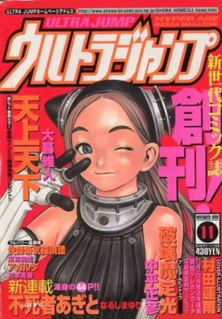 Ultra Jump is a Japanese monthly seinen manga magazine published by Shueisha under the Jump line of magazines. Originally, the magazine was a special issue of Weekly Young Jump which was first issued in 1995. On October 19, 1999, the special issue became the new monthly publication Ultra Jump. The manga titles serialized in the magazine are published in tankōbon volumes under the Young Jump Comics Ultra label.

Children's manga and children's anime refer to manga and anime directed towards children 10 years and under. These series are usually moralistic, often educating children about staying in the right path in life. Each chapter is usually a self-contained story. Notable examples include Doraemon and Hello Kitty.

Weekly Young Jump, launched in 1979, is a weekly Japanese magazine that publishes various seinen manga in each issue. It is published by Shueisha under the Jump line of magazines. The chapters of series that run in Weekly Young Jump are collected and published in tankōbon volumes under the "Young Jump Comics" imprint every four months. Many of the featured series are known to contain heavy violence and a fair amount of sexual content. The magazine is headquartered in Tokyo. 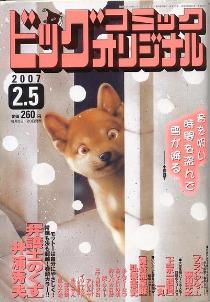 Big Comic Original is a Japanese seinen manga magazine published by Shogakukan, aimed at an older adult and mostly male audience. It is a sister magazine to Big Comic, the biggest difference being that it goes on sale twice a month in the weeks Big Comic doesn't. Cover artwork usually features a dog or cat, and a haiku. The dozen or so manga serials running at any given time feature a wide variety of material, from historical dramas and suspense to sports and romance, with relatively little science fiction or fantasy. 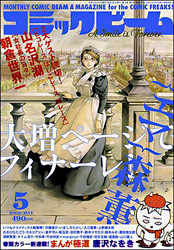 Comic Beam (コミックビーム) is a Japanese seinen manga magazine published by Enterbrain on a monthly basis since November 1995. In 2006, it had a circulation of 25,000. Popular manga serialized in Comic Beam include Kaoru Mori's Emma about the love story between a maid and an aristocratic man in Victorian England. Emma was adapted into an anime series and translated into many languages. Koi no Mon revolves around a group of otaku, their lives and romantic relationships. The comedy by Hanyu-new was made into a film in 2004. Comic Beam is considered an "alternative" manga magazine in the Japanese publishing industry, where its 25,000 circulation is less than 1% of other more popular manga magazines like Weekly Shōnen Jump. Its small but loyal readership is regarded as consisting largely of hardcore comic enthusiast and art students. 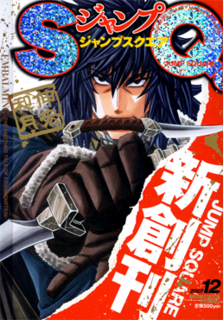 Jump Square is a Japanese monthly shōnen manga magazine. Published by Shueisha, the magazine premiered on November 2, 2007 as a replacement for Monthly Shōnen Jump, another manga anthology that Shueisha discontinued in June of that year. The magazine is a part of the Jump line of magazines. The manga titles serialized in the magazine are also published in tankōbon volumes under the Jump Comics label. The manga series within the magazine target young male readers and tend to be set in a fantasy setting with many action scenes. Like most monthly shonen manga magazines, Jump Square is aimed at ages 16 to 21. The current (2015) editor-in-chief is Kôsuke Yahagi.

Gutsoon! Entertainment, Inc. is a now defunct publisher of English translated manga. The company, headquartered in Encino, Los Angeles, served as the US subsidiary of Coamix, which was founded by Nobuhiko Horie and manga artist Tsukasa Hojo. The company published the English manga anthology Raijin Comics, a U.S. equivalent to the Japanese Weekly Comic Bunch and published many of the same titles, as well titles from other magazines such as the Japanese Weekly Shōnen Jump. Raijin Comics began as a weekly magazine with its first issue, but switched to being a monthly publication beginning with its 36th issue. Gutsoon! also published a companion magazine to Raijin Comics, titled Raijin Game & Anime, which lasted only 20 issues before being merged into the pages of Raijin Comics. The collected volumes of Raijin Comics titles were published under the Raijin Graphic Novels imprint. Raijin Comics also has a mascot called "Raijin Maru". Before the company's fall they were also planning to make a shōjo manga magazine called Smile Magazine.

Super Jump, was a biweekly manga anthology published by Shueisha under the Jump line of magazines. Released in Japan on December 20, 1986, the magazine provided serialized chapters of various seinen manga series. The manga series were published under the Jump Comics Deluxe imprint. 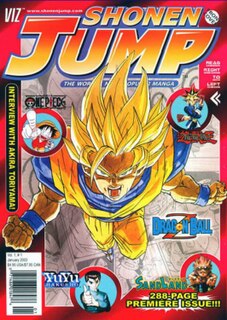 Shonen Jump, officially stylized SHONEN JUMP and abbreviated SJ, was a shōnen manga anthology published in North America by Viz Media. It debuted in November 2002 with the first issue having a January 2003 cover date. Based on Shueisha's popular Japanese magazine Weekly Shōnen Jump, Shonen Jump is retooled for English readers and the American audience, including changing it from a weekly publication to a monthly one. It features serialized chapters from four manga series, and articles on Japanese language and culture, as well as manga, anime, video games, and figurines. Prior to the magazine's launch, Viz launched an extensive marketing campaign to promote it and help it succeed where previous manga anthologies published in North America had failed. Shueisha purchased an equity interest in Viz to help fund the venture, and Cartoon Network, Suncoast, and Diamond Distributors became promotional partners in the magazine. 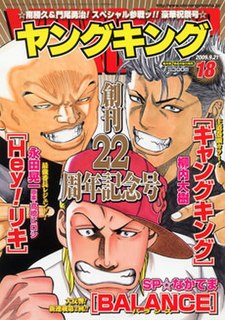