Smithsonite, also known as turkey fat or zinc spar, is the mineral form of zinc carbonate (Zn CO3). Historically, smithsonite was identified with hemimorphite before it was realized that they were two different minerals. The two minerals are very similar in appearance and the term calamine has been used for both, leading to some confusion. The distinct mineral smithsonite was named in 1832 by François Sulpice Beudant in honor of English chemist and mineralogist James Smithson (c.1765–1829), who first identified the mineral in 1802. [2] [4]

Smithsonite is a variably colored trigonal mineral which only rarely is found in well formed crystals. The typical habit is as earthy botryoidal masses. It has a Mohs hardness of 4.5 and a specific gravity of 4.4 to 4.5.

Smithsonite occurs as a secondary mineral in the weathering or oxidation zone of zinc-bearing ore deposits. It sometimes occurs as replacement bodies in carbonate rocks and as such may constitute zinc ore. It commonly occurs in association with hemimorphite, willemite, hydrozincite, cerussite, malachite, azurite, aurichalcite and anglesite. It forms two limited solid solution series, with substitution of manganese leading to rhodochrosite, and with iron, leading to siderite. [3]

Calamine is a historic name for an ore of zinc. The name calamine was derived from lapis calaminaris, a Latin corruption of Greek cadmia (καδμία), the old name for zinc ores in general. The name of the Belgian town of Kelmis, La Calamine in French, which was home to a zinc mine, comes from this. In the 18th and 19th centuries large ore mines could be found near the German village of Breinigerberg. 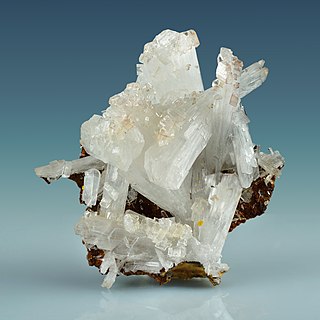 Hemimorphite, is Zn4(Si2O7)(OH)2·H2O, a component of calamine. It is a sorosilicate mineral which has been historically mined from the upper parts of zinc and lead ores, chiefly associated with smithsonite, ZnCO3. They were assumed to be the same mineral and both were classed under the same name of calamine. In the second half of the 18th century it was discovered that these two different minerals were both present in calamine. They closely resemble each other.

Wulfenite is a lead molybdate mineral with the formula PbMoO4. It can be most often found as thin tabular crystals with a bright orange-red to yellow-orange color, sometimes brown, although the color can be highly variable. In its yellow form it is sometimes called "yellow lead ore". 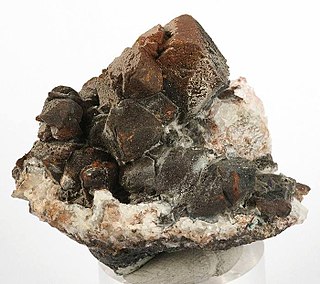 Hydrozincite, also known as zinc bloom or marionite, is a white carbonate mineral consisting of Zn5(CO3)2(OH)6. It is usually found in massive rather than crystalline form. 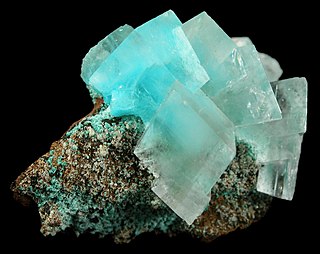 Aurichalcite is a carbonate mineral, usually found as a secondary mineral in copper and zinc deposits. Its chemical formula is (Zn,Cu)5(CO3)2(OH)6. The zinc to copper ratio is about 5:4.

Creedite is a calcium aluminium sulfate fluoro hydroxide mineral with formula: Ca3Al2SO4(F,OH)10·2(H2O). Creedite forms colorless to white to purple monoclinic prismatic crystals. It often occurs as acicular radiating sprays of fine prisms. It is translucent to transparent with indices of refraction of nα = 1.461 nβ = 1.478 nγ = 1.485. It has a Mohs hardness of 3.5 to 4 and a specific gravity of 2.7.

Siderite is a mineral composed of iron(II) carbonate (FeCO3). It takes its name from the Greek word σίδηρος sideros, "iron". It is a valuable iron mineral, since it is 48% iron and contains no sulfur or phosphorus. Zinc, magnesium and manganese commonly substitute for the iron resulting in the siderite-smithsonite, siderite-magnesite and siderite-rhodochrosite solid solution series.

Mimetite, whose name derives from the Greek Μιμητής mimetes, meaning "imitator", is a lead arsenate chloride mineral (Pb5(AsO4)3Cl) which forms as a secondary mineral in lead deposits, usually by the oxidation of galena and arsenopyrite. The name is a reference to mimetite's resemblance to the mineral pyromorphite. This resemblance is not coincidental, as mimetite forms a mineral series with pyromorphite (Pb5(PO4)3Cl) and with vanadinite (Pb5(VO4)3Cl). Notable occurrences are Mapimi, Durango, Mexico and Tsumeb, Namibia.

Alstonite, also known as bromlite, is a low temperature hydrothermal mineral that is a rare double carbonate of calcium and barium with the formula BaCa(CO
3)
2, sometimes with some strontium. Barytocalcite and paralstonite have the same formula but different structures, so these three minerals are said to be trimorphous. Alstonite is triclinic but barytocalcite is monoclinic and paralstonite is trigonal. The species was named Bromlite by Thomas Thomson in 1837 after the Bromley-Hill mine, and alstonite by August Breithaupt of the Freiberg Mining Academy in 1841, after Alston, Cumbria, the base of operations of the mineral dealer from whom the first samples were obtained by Thomson in 1834. Both of these names have been in common use. 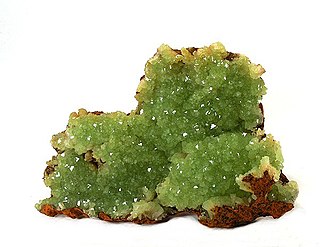 Adamite is a zinc arsenate hydroxide mineral, Zn2AsO4OH. It is a mineral that typically occurs in the oxidized or weathered zone above zinc ore occurrences. Pure adamite is colorless, but usually it possess yellow color due to Fe compounds admixture. Tints of green also occur and are connected with copper substitutions in the mineral structure. Olivenite is a copper arsenate that is isostructural with adamite and there is considerable substitution between zinc and copper resulting in an intermediate called cuproadamite. Zincolivenite is a recently discovered mineral being an intermediate mineral with formula CuZn(AsO4)(OH). Manganese, cobalt, and nickel also substitute in the structure. An analogous zinc phosphate, tarbuttite, is known. 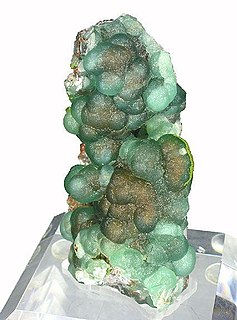 Willemite is a zinc silicate mineral (Zn2SiO4) and a minor ore of zinc. It is highly fluorescent (green) under shortwave ultraviolet light. It occurs in a variety of colors in daylight, in fibrous masses, solid brown masses (troostite), and apple-green gemmy masses.

Sauconite is a complex phyllosilicate mineral of the smectite clay group, formula Na0.3Zn3(SiAl)4O10(OH)2·4H2O. It forms soft earthy bluish white to red-brown monoclinic crystals typically massive to micaceous in habit. It has a Mohs hardness of 1 to 2 and a specific gravity of 2.45. Optically it is biaxial positive with refractive index values of nα = 1.550 - 1.580, nβ = 1.590 - 1.620 and nγ = 1.590 - 1.620. It is found in vugs and seams in the oxidized zones of zinc and copper deposits. It occurs in association with hemimorphite, smithsonite, chrysocolla, coronadite and various iron oxides.

Fraipontite is a zinc aluminium silicate mineral with a formula of (Zn,Al)
3(Si,Al)
2O
5(OH)
4. 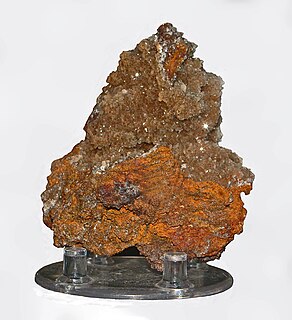 Tarbuttite is a rare phosphate mineral with formula Zn2(PO4)(OH). It was discovered in 1907 in what is now Zambia and named for Percy Tarbutt. 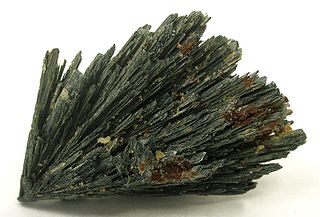 Köttigite is a rare hydrated zinc arsenate which was discovered in 1849 and named by James Dwight Dana in 1850 in honour of Otto Friedrich Köttig (1824–1892), a German chemist from Schneeberg, Saxony, who made the first chemical analysis of the mineral. It has the formula Zn
3(AsO
4)
2·8H2O and it is a dimorph of metaköttigite, which means that the two minerals have the same formula, but a different structure: köttigite is monoclinic and metaköttigite is triclinic. There are several minerals with similar formulae but with other cations in place of the zinc. Iron forms parasymplesite Fe2+
3(AsO
4)
2·8H2O; cobalt forms the distinctively coloured pinkish purple mineral erythrite Co
3(AsO
4)
2·8H2O and nickel forms annabergite Ni
3(AsO
4)
2·8H2O. Köttigite forms series with all three of these minerals and they are all members of the vivianite group.

The Shady Dolomite is a geologic formation composed of marine sedimentary rocks of early Cambrian age. It outcrops along the eastern margin of the Blue Ridge province in the southeastern United States and can be found in outcrops in the states of Alabama, Georgia, Tennessee, North Carolina, and Virginia. It is also can be found in the subsurface of Kentucky, Ohio, and West Virginia. The Shady is predominantly composed of dolostone and limestone with lesser amounts of mudrock. It contains fossils of trilobites, archaeocyathids, algae, brachiopods, and echinoderms, along with the enigmatic fossil Salterella. The Shady Dolomite was first described by Arthur Keith in 1903 and was named for exposures in the Shady Valley of Johnson County in the state of Tennessee. Near Austinville, Virginia, the Shady hosts ore deposits that have been mined extensively for lead and zinc ore.