Soompi is an English-language website providing coverage of Korean pop culture. [1] It has one of the largest international Internet communities for K-pop, [2] mostly concentrated in news and forums. With more than 23 million fans across all platforms, Soompi offers English and Spanish services. [3]

Since its establishment in 1998, Soompi has grown into one of the longest-running, and most frequently visited websites providing coverage of Korean music, celebrity news and entertainment. [4] [5] [6] [7]

Initially its visitors were mostly Koreans residing in foreign nations, with over 1.2 million people visiting the site. However, as of 2012, the majority of its members are non-Koreans in the United States, Canada, Singapore, the Philippines, and Malaysia, among others. [8] [9]

Soompi was founded in 1998 by Korean American web developer Susan Kang, [10] [11] In February 2011, it was acquired by Enswers, Inc., [12] [13] [14] a Seoul-based IT venture company specializing in video search technology, [15] and operated as a wholly owned subsidiary of it. When Enswers was acquired by another company, Soompi found a new home with Crunchyroll, a U.S.-based VOD site that specializes in anime, in 2013.[ citation needed ] Viki acquired Soompi on August 19, 2015. [16]

Hagwon is the Korean-language word for a for-profit private institute, academy, or cram school prevalent in South Korea. Although most widely known for their role as "cram schools", where children can study to improve test scores, hagwons actually perform several educational functions:

The Korean wave or K wave is the increase in global popularity of South Korean culture since the 1990s. First driven by the spread of K-dramas and K-pop across East, Southeast and South Asia during its initial stages, the Korean Wave evolved from a regional development into a global phenomenon, carried by the Internet and social media and the proliferation of K-pop music videos on YouTube. While some sources attribute the term Hallyu, a variation of a Japanese expression using Ryu (流) as a postfix to refer ‘～way’, ‘~style’, ‘～group’, to being first used by the Ministry of Culture and Tourism in South Korea in 1999, when the ministry produced a music CD titled in Chinese 韓流—Song from Korea; other scholarly sources attribute the term's ascendance from Korean television dramas first airing on Chinese television in 1997, naming the phenomenon hanliu, meaning "Korean wave". The term was adopted by Chinese media to refer to the success of South Korean popular culture in China. The term was reintroduced in Japan as hanryu or kanryu by the Asahi Shimbun in 2001. These two words, hallyu and Korean wave, were officially included in the Oxford English Dictionary in 2021. 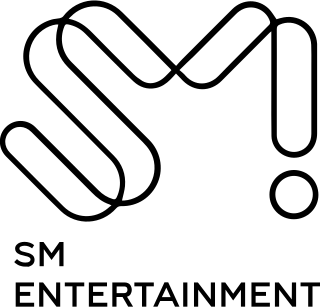 SM Entertainment Co., Ltd. (Korean: SM엔터테인먼트) is a South Korean multinational entertainment company. It is one of South Korea's largest entertainment companies where it was established in 1995 by record executive and record producer Lee Soo-man. The company has been responsible for fostering and popularizing the careers of myriad of K-pop stars garnering huge global fanbases. The company operates as a record label, talent agency, music production company, event management and concert production company, and music publishing house. SM Entertainment is known for having led the worldwide K-pop phenomenon and the musical side of "Hallyu", also known as the "Korean Wave", with early overseas successes such as H.O.T., S.E.S. and BoA. 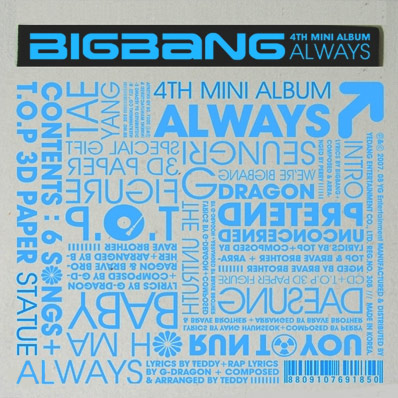 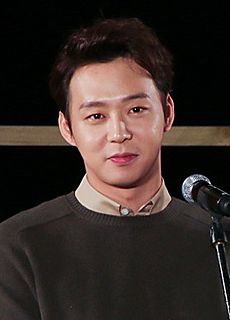 Park Yoo-chun, formerly known as Micky Yoochun and better known by the mononym Yoochun, is a South Korean singer-songwriter and actor. He is a former member of the South Korean boy bands JYJ and TVXQ. He has starred in dramas Sungkyunkwan Scandal (2010), Miss Ripley (2011), Rooftop Prince (2012), Missing You (2012), Three Days (2014) and The Girl Who Sees Smells (2015). 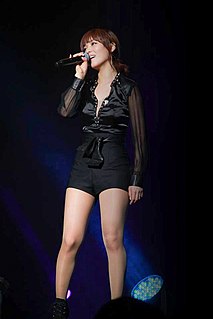 Min Sun-ye, known professionally as Sunye or Sun, is a South Korean singer, actress and missionary. She is the former leader and main vocalist of the K-pop group Wonder Girls.

Highlight is a South Korean boy band formerly known as Beast. The band consists of four members: Yoon Doo-joon, Yang Yo-seob, Lee Gi-kwang, and Son Dong-woon. Originally a six-piece band, Jang Hyun-seung departed from the group in April 2016, and Yong Jun-hyung departed in March 2019. In late 2016, the group moved labels from Cube Entertainment to Around Us Entertainment and subsequently changed their name to Highlight in 2017.

Kakao M was a South Korean entertainment company established by Min Yeong-bin in 1978. It is currently one of the largest co-publisher companies in South Korea. The company operates as a record label, talent agency, music production company, event management, concert production company, and music publishing house. 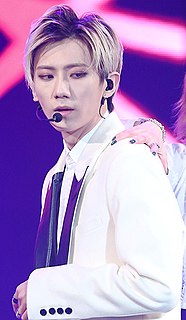 Jang Hyun-seung most often credited as Hyunseung, is a South Korean singer. He is best known as a former member of the boy group Beast. With Beast, he has released singles and albums in both Korean and Japanese. Beast won the Artist of the Year (Daesang) award at the Melon Music Awards in 2011.

A sasaeng, or sasaeng fan, is an obsessive fan who stalks or engages in other behaviour constituting an invasion of the privacy of celebrities, specifically Korean idols, drama actors or other public figures. The term sasaeng comes from the Korean words sa meaning "private" and saeng meaning "life", in reference to the fans' intrusion into celebrities' private lives, and the term is mostly used domestically in South Korea as well as other parts of Asia. According to the estimates of celebrity managers in the Korean media, popular Korean celebrities may have "between 500 and 1,000 sasaeng fans", and be actively followed by about 100 sasaeng fans every day. Sasaeng fans are described as often being female, aged 13 to 22, and driven to commit what in some cases may amount to borderline criminal acts in order to gain attention from celebrities. Examples of such acts include seeking out celebrities at their dorms or homes, stealing their personal belongings or information, harassing family members, and sending idols inappropriate gifts such as lingerie.

"Monster" is a song recorded by South Korean group Big Bang. It was released on June 3, 2012 by YG Entertainment as the only single from the repackaged version of their extended play Alive, Still Alive. The song was written by group members G-Dragon and T.O.P, and composed by the previous with Choi Pil-kang. "Monster" peaked atop South Korea's Gaon Digital Chart and reached the Top 10 on the Japan Hot 100.

Park Sang-hyun, known by his stage name Thunder, is a South Korean singer, songwriter, actor and model. He is a former member of South Korean boy band MBLAQ. On December 16, 2014, it was announced that he had departed from the group to focus on studying music. He signed with Mystic Entertainment's music label APOP on February 11, 2015 and released his debut extended play on December 7, 2016. 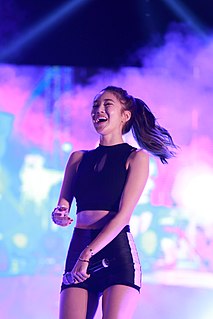 Kim Yoon-ji is a Korean-American singer and actress in South Korea. She performs under the stage name NS Yoon-G and debuted in 2009 with the digital single "Head Hurts" under JTM Entertainment. She is now with VAST Entertainment. The "NS" in her name initially stood for "New Spirit", but was later changed to "New Star". Kim used her Korean name as a part of her stage name as she found "Christine" too difficult for Korean people to pronounce.

Peniel Shin, better known mononymously as Peniel (Korean: 프니엘), is a Korean-American rapper and singer based in South Korea. He debuted as a member of the South Korean boy group BtoB in 2012.

Lee Seung-hoon, better known by the mononyms Seunghoon and Hoony, is a South Korean rapper, singer-songwriter, choreographer and member of South Korean boy group Winner. He is well known for his appearance in the first season of SBS' reality survival program K-pop Star. 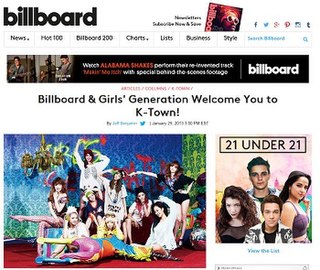 Billboard K-Town is an online magazine column presented weekly, on various days, by Billboard on its Billboard.com site. The column, launched on January 29, 2013, reports on K-pop music; artists, concerts, chart information and news events. Billboard and its website had reported on K-pop for a number of years, following the evolution of K-pop, increasing the number of articles with the spike in 2009, and finally culminated in a column specifically for the genre after Psy's July 2012, "Gangnam Style" hit made K-pop history and doubled online viewership. K-Town was created as part of the popular music publication's website relaunch, with new features for fans, and the goal of providing more on-site reporting of festivals, award shows, and other major music events. 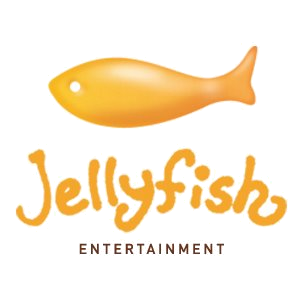 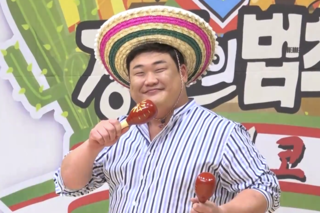 Kim Jun-hyun, is a South Korean comedian, signed under JDB Entertainment until 2021.