A spending review or occasionally comprehensive spending review is a governmental process in the United Kingdom carried out by HM Treasury to set firm expenditure limits and, through public service agreements, define the key improvements that the public can expect from these resources. [1]

Spending reviews typically focus upon one or several aspects of public spending while comprehensive spending reviews focus upon each government department's spending requirements from a zero base (i.e. without reference to past plans or, initially, current expenditure). The latter are named after the year in which they are announced – thus CSR07 (completed in October 2007) applies to financial years 2008–2011.

The next spending review was announced on 21 October 2020 and will take place on 25 November 2020. In contrast to previous years this review will cover a one-year period. [4]

The UK's 2007 Comprehensive Spending Review included three significant changes. The first was that it represented the first test of the capacity of the Spending Review process to plan and deliver a discretionary fiscal consolidation in the UK. The previous four Spending Reviews took place during a period of steady public growth in the economy from 37% in 1999–00 to 42% by 2007–08. As both the UK's then fiscal rules (the Golden rule and the sustainable investment rule) began to bite[ vague ][ citation needed ], the UK government desired to halve the real rate of growth in public spending from 4% per annum over the last decade to 2% per annum over the next three years – a 0.5% below than the trend rate of growth of the economy. A second noteworthy development in the 2007 CSR was a marked extension in the certainty that the UK system provided to public sector managers about their future budgets. Finally, CSR07 saw the UK's public service 110 largely departmental-based Public Service Agreements consolidated into 30 inter-departmental agreements.

A spending review for the years 2011/12 through to 2014/15 was announced by the coalition government. This review was driven by a desire to reduce government spending in order to cut the budget deficit. [5]

Chancellor of the Exchequer George Osborne announced the details of the spending review on 20 October 2010. [6] The cuts were described as the biggest since World War II. [7] The review led to an £81 billion cut in public spending in the following 4 years of the parliament, with average departmental cuts of 19%. In addition major changes in welfare were announced including £7 billion of extra welfare cuts, changes to incapacity benefit, housing benefit and tax credits and a rise in the state pension age to 66 from 2020. [7] Public sector employees will face a £3.5 billion increase in public pension contributions.

The Home Office faced cuts of 25%, [8] local councils would face a yearly 7% cut in funding from central government each year until 2014. [8] The Ministry of Defence faced cuts of around 8%. In addition many other public sector bodies had cuts to their funding. [8] Although not part of government the BBC had its licence fee frozen for 6 years and took on the funding of the BBC World Service, BBC Monitoring and S4C. [8] The Office for Budget Responsibility predicted that the spending review led to a loss of about 490,000 public sector jobs by 2015. [8] The NHS saw a 0.4% increase in spending in real terms over the following 4 years. [8]

A £200 million payment was announced to compensate savers in the collapsed savings society Presbyterian Mutual. [9]

A report published in late 2013 by Trust for London and the London School of Economics and Political Science estimated that local government budgets in London had taken a 33% real terms cut in central government funding for local government between 2009/10 and 2013/14. [10]

A spending review for the years 2016–17 to 2020-21 was announced by chancellor George Osborne alongside an Autumn Statement on 25 November 2015.

Chancellor Rishi Sunak will deliver his first spending review on 25 November 2020. In contrast to previous years and as a consequence of the COVID-19 pandemic the review will cover a one-year period from 1 April 2021 to 31 March 2022.

The private finance initiative (PFI) was a United Kingdom government procurement policy aimed at creating "public–private partnerships" (PPPs) where private firms are contracted to complete and manage public projects. Initially launched in 1992 by Prime Minister John Major, PFI is part of the wider programme of privatisation and financialisation, and presented as a means for increasing accountability and efficiency for public spending.

The Department for International Development (DFID) was the government department of the United Kingdom responsible for administering overseas aid. The goal of the department was "to promote sustainable development and eliminate world poverty". DFID was headed by the United Kingdom's Secretary of State for International Development. The position was last held between 13 February 2020 and the department's abolishment on 2 September 2020 by Anne-Marie Trevelyan. In a 2010 report by the Development Assistance Committee (DAC), DFID was described as "an international development leader in times of global crisis". The UK aid logo is often used to publicly acknowledge DFID's development programmes are funded by UK taxpayers.

George Gideon Oliver Osborne is a British politician and newspaper editor who served as Chancellor of the Exchequer from 2010 to 2016 in the Cameron government. A member of the Conservative Party, he was Member of Parliament (MP) for Tatton from 2001 to 2017. He has been editor-in-chief of the London Evening Standard since 2020, having been its editor from 2017 to 2020. 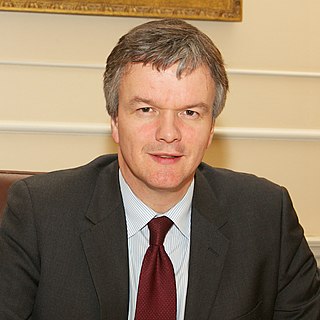 Sir Alan Peter Budd is a prominent British economist, who was a founding member of the Bank of England's Monetary Policy Committee (MPC) in 1997.

The UK rebate was a financial mechanism that reduced the United Kingdom's contribution to the EU budget in effect since 1985. It was a complex calculation which equated to a reduction of approximately 66% of the UK's net contribution – the amount paid by the UK into the EU budget less receipts from the EU budget. Based on a net contribution of €11.7 (£9.6) billion in 2016, the UK Treasury estimated the 2017 rebate amounted to €6.6 (£5.6) billion reducing the ultimate UK contribution for the 2017 budget to €10.4 (£8.9) billion. Although the rebate was not set in the EU treaties, it was negotiated as part of the Multiannual Financial Framework (MFF) every seven years and had to be unanimously agreed.

The Golden Rule is a guideline for the operation of fiscal policy. The Golden Rule states that over the economic cycle, the Government will borrow only to invest and not to fund current spending. In layman's terms this means that on average over the ups and downs of an economic cycle the government should only borrow to pay for investment that benefits future generations. Day-to-day spending that benefits today's taxpayers should be paid for with today's taxes, not with leveraged investment. Therefore, over the cycle the current budget must balance or be brought into surplus. 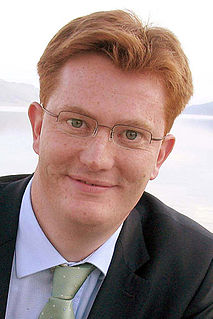 Sir Daniel Grian Alexander is a British banker who is vice president and corporate secretary at the Asian Infrastructure Investment Bank. He was a Liberal Democrat politician who was Chief Secretary to the Treasury between 2010 and 2015. He was the Member of Parliament (MP) for the Inverness, Nairn, Badenoch & Strathspey constituency from 2005 until the general election in May 2015, when he was defeated by Drew Hendry of the Scottish National Party (SNP). In his first parliamentary term (2005–2010), Alexander was the Liberal Democrat spokesperson for Work and Pensions (2007–2008), the Chief of Staff to party leader Nick Clegg, and Chair of the Liberal Democrat Manifesto Group (2007–2010).

The June 2010 United Kingdom Budget, officially also known as Responsibility, freedom, fairness: a five-year plan to re-build the economy, was delivered by George Osborne, Chancellor of the Exchequer, to the House of Commons in his budget speech that commenced at 12.33pm on Tuesday, 22 June 2010. It was the first budget of the Conservative-Liberal Democrat coalition formed after the general election of May 2010. The government dubbed it an "emergency budget", and stated that its purpose was to reduce the national debt accumulated under the Labour government.

Britain's Economy: Cameron and Clegg Face the Audience is a special live political debate programme which was aired on BBC television on the evening of Wednesday 23 June 2010. The programme featured British prime minister David Cameron and his Deputy Nick Clegg facing questions from a specially selected audience following the previous day's emergency budget statement in which Chancellor George Osborne had announced £6 billion worth of cuts in Government spending. It was chaired by Nick Robinson and saw Cameron and Clegg facing questions on the Budget's potential impact. The occasion marked the first joint interview with Cameron and Clegg since forming a coalition government following the 2010 general election the previous month. The programme was aired on the BBC News channel at 7:00pm, then again on BBC Two at 11.25pm. It was also shown on BBC Parliament the following Sunday.

The 2011 United Kingdom budget, officially called 2011 Budget - A strong and stable economy, growth and fairness, was delivered by George Osborne, the Chancellor of the Exchequer, to the House of Commons on 23 March 2011.

The United Kingdom National Debt is the total quantity of money borrowed by the Government of the United Kingdom at any time through the issue of securities by the British Treasury and other government agencies.

The Budget of Her Majesty's Government is an annual budget set by HM Treasury for the following financial year, with the revenues to be gathered by HM Revenue and Customs and the expenditures of the public sector, in compliance with government policy. The budget is one of two statements given by the Chancellor of the Exchequer, with the Spring Statement being given the following year. 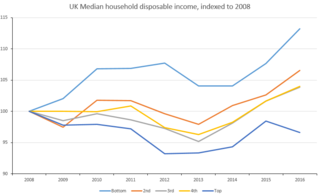 The United Kingdom government austerity programme is a fiscal policy adopted in the early 21st century following the Great Recession. It is a deficit reduction programme consisting of sustained reductions in public spending and tax rises, intended to reduce the government budget deficit and the role of the welfare state in the United Kingdom. The Conservative government claimed that the National Health Service and education have been "ringfenced" and protected from direct spending cuts, but between 2010 and 2019 more than £30 billion in spending reductions have been made to welfare payments, housing subsidies and social services. The effects of United Kingdom austerity policies have proved controversial and the policies have received criticism from a variety of politicians and economists. Anti-austerity movements have been formed among citizens more generally.

The history of the British national debt can be traced back to the reign of William III, who engaged a syndicate of City traders and merchants to offer for sale an issue of government debt, which evolved into the Bank of England. In 1815, at the end of the Napoleonic Wars, British government debt reached a peak of £1 billion.

The 2013 United Kingdom budget was delivered by George Osborne, the Chancellor of the Exchequer, to the House of Commons on Wednesday 20 March 2013.

Jonathan Portes is Professor of Economics and Public Policy at the School of Politics & Economics of King's College, London.

The 2016 United Kingdom budget was delivered by George Osborne, the Chancellor of the Exchequer, to the House of Commons on Wednesday, 16 March 2016.