St. Andrew's Kirk is one of the oldest buildings in Georgetown, Guyana that has been continually in use for religious purposes. The Dutch Reformed congregation laid its foundations in 1811. However, due to financial difficulties it was acquired by Scottish Presbyterians and was formally opened for service on 28 February 1818. [1] [2]

It was the first church in Guyana built by Europeans in which slaves were allowed to worship. [1] It is situated near the Parliament Building on the north eastern corner of Brickdam. [3] During its bicentennial in 2018, then President David A. Granger remarked that the church was a "social microscope", as a monument to the city's colonial Dutch and British heritage, the first church to open its doors to enslaved Africans, and also as barracks for the Provisional Battalion deployed for suppressing the Demerara rebellion of 1823. A historic service was held to mark Emancipation on 1 August 1838, which was attended by then Governor Sir Henry Light and many Afro-Guyanese. The church established a school in 1841 and hosted public concerts and recitals. [4]

Rev. Oswald Allen Best was the first Guyanese minister serving from 1974 until his death in April, 2009. [3] In September 2011, Reverend Maureen Massiah, was appointed. Massiah is the first female Minister elevated to the full status of Ordained Minister. [3] [5]

Bharrat Jagdeo is a Guyanese politician who has been serving as Vice President of Guyana since 2020, in the administration of President Irfaan Ali. He had previously also held the office from 1997 until 1999, during the presidency of Janet Jagan. Jagdeo subsequently served as the President of Guyana from 11 August 1999 to 3 December 2011. He also holds a number of global leadership positions in the areas of sustainable development, green growth and climate change.

Brindley Horatio Benn, CCH was a teacher, choirmaster, politician, and one of the key leaders of the Guyanese independence movement. He was put under restriction when the constitution was suspended in 1953. In 1957, Benn served as Minister of Community Development and Education in the first elected government of Guyana, and between 1961 and 1964 as Minister of Natural Resources. From 1993 to 1998, he served as High Commissioner of Guyana to Canada. 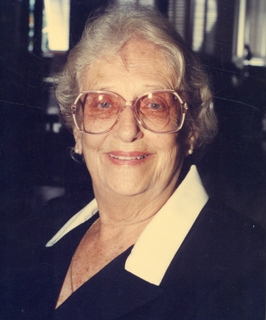 Janet Rosenberg Jagan was a Guyanese politician and American expatriate who served as the President of Guyana, serving from December 19, 1997, to August 11, 1999. She was the first female President of Guyana. She previously served as the first female Prime Minister of Guyana from March 17, 1997, to December 19, 1997. The wife of Cheddi Jagan, whom she succeeded as president, she was awarded Guyana's highest national award, the Order of Excellence, in 1993, and the UNESCO Mahatma Gandhi Gold Medal for Women's Rights in 1998. 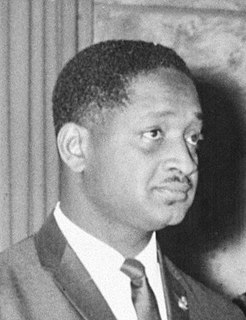 Linden Forbes Sampson Burnham was a Guyanese politician and the leader of Co-operative Republic of Guyana from 1964 until his death. He served as Prime Minister from 1964 to 1980 and then as its first Executive President from 1980 to 1985. He is often regarded as a strongman who embraced his own version of communism. Throughout his presidency, he encouraged Guyanese to produce and export more local goods, especially through the use of state-run corporations and agricultural cooperatives. Despite being widely regarded as one of the principal architects of the postcolonial Guyanese state, his presidency was nonetheless marred by repeated accusations of Afro-supremacy, state-sanctioned violence, economic collapse, electoral fraud, and corruption.

The Catholic Church in Guyana is part of the worldwide Catholic Church, under the spiritual leadership of the Pope in Rome. Bishops in Guyana are members of Antilles Episcopal Conference. Like most other nations that form the AEC, the Apostolic delegate to the bishops' conference is also the Apostolic nuncio to the country, currently American archbishop Thomas Edward Gullickson.

Religion is an important aspect of identity and society in Guyana. In 2012 the population was 63% Christian, 25% Hindu, 7% Muslim. Religions are reflected by East Indian, African, Chinese, and European ancestry, as well as a significant indigenous population. Members of all ethnic groups are well represented in all religious groups, with two exceptions: most Hindus are Indo-Guyanese, and nearly all Rastafarians are Afro-Guyanese people. Foreign missionaries from many religious groups are present. Christianity has historically been associated with Afro-Guyanese.

The Presbyterian Church of Guyana was founded by missionaries of the Church of Scotland. On September 23, 1815 a Scotsmen bought an unfinished church building from the Dutch. This was the St. Andrew's Kirk, Georgetown. The first minister was Rev Archibald Brown, who arrived in September 1816. Many members were slave owners, but from 1821 slaves were admitted to the worship services. The church developed, the Presbyterian Church of Guyana was formed in 1837. By 1861 it absorbed the remnants of the Nederduitch Hervormde Kerk in Guyana. In 1945 a capital sum was paid to the presbytery and the church ceased its financial aid. In 1967 the Church of Scotland dissolved the Presbytery and it became an autonomous denomination. Membership was 5,600 in 25 congregations. It adheres to the Westminster Confession.