Stephen Docherty (born 18 February 1976) is a Scottish former football player and coach. He previously played in the Scottish Football League for Partick Thistle and Clydebank. He also played for both Airdrieonians and their re-inacarnation Airdrie United.

He scored the first goal for the reborn Airdrie United club, in a 1–0 win over Forfar Athletic at New Broomfield. He was also captain of the club and was inducted into the Airdrie United "Hall of Fame" in 2007.

Docherty dropped down to junior level, joining Bathgate Thistle in 2006. He was part of the Bathgate team that defeated Cumnock Juniors 2–1 to win the 2008 Scottish Junior Cup Final, assisting Paul McGrillen's winning goal. [1] After two and a half years at Bathgate, he joined Irvine Meadow in January 2009. [2]

He made his Scotland junior international debut, picking up player of the tournament in Quad home nations tournament in the Isle of Man.

Docherty was appointed as assistant manager of Pollok. He left the club following a disagreement with manager John Richardson, but returned to the role six weeks later in March 2013. [3] When Richardson left the club in September 2013, Docherty took over as caretaker manager and was widely expected to be given the job permanently; when the club only invited him to apply along with other candidates, a number of players threatened to leave the club. [4] Pollok changed their mind and appointed Docherty as manager in October, with Brian McGinty as his assistant. [5] However, he resigned in December 2013 after taking only three points from five league matches. [6]

In June 2020, Docherty was announced as an assistant to Stephen Robertson with Yoker Athletic's newly-launched under-20 development squad. [7] They left the club having never taken charge of a match due to the COVID-19 pandemic. Docherty subsequently joined the coaching staff at Caledonian Amateur League club St Joseph's in April 2021. [8]

The Scottish Junior Cup is an annual football competition organised by the Scottish Junior Football Association for its 116 member clubs. The competition has been held every year since the inception of the SJFA in 1886 and, as of the 2020–21 edition, up to 95 teams could compete in the tournament. The cup has an unseeded knockout format with semi-finals over two legs and the final played at a neutral venue, always that of an SPFL club.

Clydebank Football Club are a Scottish football club based in the town of Clydebank, West Dunbartonshire. The current club, formed in 2003, is a member of the West of Scotland Football League. 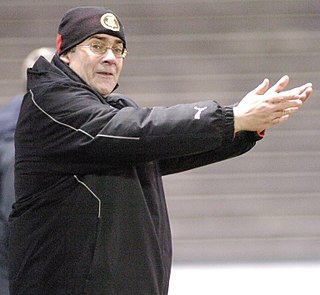 Alan Lawrence, fondly known as "Nipper", is a Scottish former footballer, best known for his time spent with Airdrieonians and Heart of Midlothian in the early and mid-1990s. He also worked as a coach with Airdrie United in the Scottish First and Second Divisions.

Darren Simon Brady is a Scottish retired footballer who played as a midfielder.

Paul Lovering is a Scottish former professional footballer and is currently the manager at Glasgow Junior club Benburb.

Brian McGinty is a Scottish former professional footballer. After beginning his career with Rangers in the Scottish Football League Premier Division he later played league football in both Scotland and England.

Ross Docherty is a Scottish professional footballer who plays as a midfielder for Scottish League One side Partick Thistle.

William Howie is a Scottish former football who last played as a midfielder for Pollok in the Scottish Junior Football Association, West Region. He previously played in the Scottish Premier League with Partick Thistle.

The 2017–18 West of Scotland Super League was the 16th and final season of the West Super League, the top tier of league competition for SJFA West Region member clubs.

The West of Scotland Football League (WoSFL) is a newly-created senior football league, featuring 67 clubs based in the west of Scotland.