Andrew Mark Smith (born 27 November 1968) is a retired Scottish footballer who played as a striker, and most recently was a temporary manager of Gretna with Mick Wadsworth.

He briefly played in Canada with the Calgary Kickers of the Canadian Soccer League. [3]

He scored Airdrie's goal in the 1992 Scottish Cup Final against Rangers after coming on as a substitute (an eventual 2–1 defeat), [4] and subsequently played in the 1992–93 European Cup Winners' Cup against Sparta Prague. [5] In November 1994, he again came off the bench to score in a cup final, this time the winner in a 3–2 extra-time victory over Dundee in the 1994 Scottish Challenge Cup Final, [6] and at the end of that season appeared in the 1995 Scottish Cup Final versus Celtic, [7] but the Diamonds also lost on that occasion.

Smith joined Dunfermline Athletic in 1995 for £70,000, breaking his leg on his debut in a pre-season friendly [8] but recovering to score several times including the goal which confirmed the club's promotion to the Premier Division. [9] During the Pars' three-year spell in the top tier he scored 34 times, and in January 1998 he got five of his team's goals in a 7–2 Scottish Cup win over amateurs Edinburgh City. [10]

He then had a spell at Kilmarnock, [11] being brought in as cover for injured veteran Ally McCoist for a £150,000 transfer fee in January 2000 after a short loan period over the month prior, [12] [8] but he failed to make an impact during the rest of the season, scoring only once before McCoist returned and eventually was loaned to Ross County before being released, joining Raith Rovers in 2001. [13] During his time in Kirkcaldy, the club were relegated [14] but then won the Scottish Second Division championship. [8]

Smith joined Clyde in summer 2003, [15] and formed a good partnership with Ian Harty. [16] Despite age catching up on him, Smith scored 10 league goals for the club, and almost won promotion to the Scottish Premier League, losing out to champions Inverness Caledonian Thistle by one point. [8]

He then joined Gretna where he made a handful of appearances and helped them win the Scottish Third Division. He retired from playing in 2005, though remained at Gretna in a coaching role until the club folded in 2008. [17]

Smith had a role as a footballer in the 2000 film A Shot at Glory, which featured Robert Duvall, Michael Keaton and Ally McCoist. Smith's character scores for the fictional club Kilnockie in the Scottish Cup semi-final (against Kilmarnock, the team he and McCoist played for in real life at the time) to send them through to play Rangers at Hampden Park.

He settled in the west of Scotland and spent time working as a football development officer with both the Scottish Football Association [8] and North Lanarkshire Council, until a dispute occurred with the local authority over wages paid. [18]

Andy's son Jack is also a footbller and a striker, who trained as a youth with St Mirren and was playing for East Kilbride in the Lowland Football League (fifth tier) in 2016. [19]

Airdrieonians Football Club, more commonly known as Airdrie, was a Scottish professional football team from the town of Airdrie, in the Monklands area of Lanarkshire. 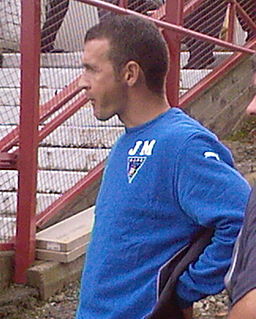 James McIntyre is a Scottish football player and coach. McIntyre played mainly as a striker or as a left midfielder. During his playing career he played for Bristol City, Exeter City, Airdrieonians, Kilmarnock, Reading, Dundee United and Dunfermline Athletic.

William McLaren is a Scottish professional footballer who plays for Scottish Junior club Forth Wanderers, who plays as a midfielder. He has played for several Scottish clubs throughout his career which started in 2003.

A Shot at Glory is a film by Michael Corrente produced in 1999 and released in 2002, starring Robert Duvall and the Scottish football player Ally McCoist. It had limited commercial and critical success. The film features the fictional Scottish football club Kilnockie FC, based on a Second Division Scottish Football League club, as they attempt to reach their first ever Scottish Cup Final. The final game is against Rangers.

The 2007–08 season was the 111th season of competitive football in Scotland.

Craig Barr is a Scottish footballer who plays as a defender for Cowdenbeath. Barr has previously played for Gretna, Queen of the South, Livingston, Airdrieonians, Raith Rovers and Dumbarton, as well as Swedish club Östersunds FK.

The Scottish War Emergency Cup was a temporary competition held at the start of the Second World War, due to the suspension of the Scottish Cup by the SFA. It was held between February and May in 1940, the competition involved all sixteen League clubs still operating at the time, Cowdenbeath later withdrew which meant Dunfermline Athletic received a bye in the first round. Rangers beat Dundee United 1–0 in the Final.

The 2009–10 season was Dunfermline Athletic's 3rd season in the Scottish First Division after being relegated from the Scottish Premier League in 2007.

The 2020–21 season is the 124th season of competitive football in Scotland. The domestic season began on 1 August 2020 with the first round of matches in the 2020–21 Scottish Premiership. The start of all other domestic competitions were delayed until at least October 2020 because of the COVID-19 pandemic, and most games have been played behind closed doors due to Scottish Government restrictions.