Airdrieonians Football Club is a Scottish professional football team in Airdrie, North Lanarkshire, who are members of the Scottish Professional Football League (SPFL) and play in Scottish League One. They were formed in 2002 as Airdrie United Football Club following the liquidation of the original Airdrieonians club, formed in 1878. The club's official name was changed in 2013 with the approval of the Scottish Football Association to the traditional name of Airdrieonians. As with the previous club, this is often colloquially shortened to simply "Airdrie".

The club have won two trophies in their short history – the Scottish Second Division in 2003–04 and the Challenge Cup in 2008–09. Once described as "the luckiest team in the Scottish League", [2] the club have benefited in league division placements due to other club's misfortunes on three occasions (2008, 2009 and 2012).

The club was formed in 2002 as Airdrie United, following the bankruptcy of the original Airdrieonians. [3] [4]

Airdrieonians had finished runners-up in the Scottish First Division in the 2001–02 season [5] but went out of business with debts approaching £3 million. [6] The collapse of "The Diamonds", as they were known due to their distinctive kits, [7] created a vacancy in the Scottish Football League (in the Scottish Third Division). Accountant and Airdrieonians fan Jim Ballantyne attempted, with the help of others, to gain entry with a club called "Airdrie United" who were essentially to be a reincarnation of Airdrieonians. [8] Their application however was rejected as the then English Northern Premier League side Gretna were preferred by league members over the new Airdrie United. [9]

Airdrie United then went on to complete a buy-out of the ailing Second Division side Clydebank [10] and with SFL approval the club was relocated to Airdrie, [11] the strips were transformed to resemble that of Airdrieonians, and the name was changed to Airdrie United. While this means that the club is therefore officially a legal continuation of Clydebank, it is almost universally accepted as a reincarnation of Airdrieonians, with Clydebank having been reformed by supporters' groups and entering into the West Region Junior League. [12]

Managed by Sandy Stewart, Airdrie United's first match took place at New Broomfield [13] against Forfar Athletic in August 2002, with captain Stephen Docherty scoring the only goal of the game with Airdrie United winning 1–0. [14] Their debut season saw the club only narrowly fail to achieve promotion by one point [15] due to a late injury-time goal from Brechin City [16] which saw them promoted instead. [15] The club reached the second round of the Challenge Cup, [17] the third round of the Scottish Cup [17] and the third round of the Scottish League Cup [18] having beaten Premier League side Kilmarnock in the second round. [19]

During the rest of Stewart's tenure the club reached the final of the Challenge Cup in 2003 (losing 2–0 to Inverness Caledonian Thistle), [20] and won the Second Division title in 2003–04 season. [21] Having started poorly Airdrie went on a run that saw them unbeaten in the last 18 games of that season, [22] [23] including the final game of the league campaign which saw a crowd of over 5,700 at New Broomfield to watch Airdrie defeat Morton 2–0 and lift the League Championship trophy, [24] the club having been confirmed champions the previous week following their 1–0 victory away to Alloa Athletic at Recreation Park. [22]

The club won the Challenge Cup in 2008, defeating Ross County 3–2 on penalties after a 2–2 draw, [37] and after this success manager Kenny Black signed a long term contract (until 2012).

After big financial cutbacks saw all players released in May 2010, [38] it was announced the club would be operating on a part-time basis. [39] The club's decision to focus on developing youth was vindicated in January 2011, as Celtic signed teenager Tony Watt for a sum of £80,000 plus add-ons. [40]

The first league game between Airdrie United and local rivals Albion Rovers took place at New Broomfield on 10 September 2011, with Airdrie winning 4–0. [41] After another play-off defeat by 6–2 on aggregate to Dumbarton in the promotion play-off final at the end of 2011–12 season [42] Airdrie were lucky again as the liquidation of the company that operated Scottish Premier League side Rangers [43] and the decision by Scottish Football League clubs that Rangers should play in the Scottish Third Division, [44] meant that an additional team from each tier of Scottish football was promoted for the 2012–13 season. [45] As Airdrie were runners up in the previous season's Second Division promotion play-offs, they were promoted to the Scottish First Division. [45] A season in the First Division came to an end in May 2013, with the club finishing bottom of the league and relegated to Division Two. [46]

In June 2013, the club officially changed its name from Airdrie United Football Club to Airdrieonians Football Club. [4] The name change revived the name of the club it was formed to replace in 2002, following the liquidation of the original Airdrieonians. [47] The Airdrieonians all red club crest was also revived, [48] [49] with an alternate black and red version used for the away kits. [50]

At a meeting with fans Wotherspoon outlined his long term plans for the club including a return to full-time football should the club gain promotion to the SPFL Championship, however he announced to the media in January 2016 that the club would be returning to full-time football in the summer of 2016 (irrespective of the division they would be playing in).

In December 2016 the Airdrieonians Supporters Trust became the first fans group in the world to sponsor their team's home kit, with the strip paying tribute to Airdrie fan Mark Allison.

Despite retaining his majority shareholding Tom Wotherspoon resigned as chairman and director of Airdrieonians on 5 June 2017, with former chairman Jim Ballantyne taking Wotherspoon's place as chairman. [52]

In January 2018, it was announced that a consortium of various businessmen (including former Airdrieonians manager Bobby Watson) had taken control of Tom Wotherspoon's controlling shares, bringing to an end a tumultuous period for the club. The majority of the previous board was replaced, including Jim Ballantyne, and subsequently Director of Football Gordon Dalziel (appointed Oct 2016) departed. With Excelsior Stadium representation on the new board the club also indicated that they would be abandoning Ravenscraig Sports Complex and returning to training at the stadium. [53]

Airdrie play their home fixtures at Excelsior Stadium, also unofficially known as New Broomfield, and for sponsorship reasons as the Penny Cars stadium. [54] The ground was built when now defunct Airdrieonians' previous home, Broomfield Park, was sold to supermarket chain Safeway, who were given permission to build a new store on the site. [55] This transaction has been cited as being the cause of the financial ruination of the club, as their old ground was demolished several years before they acquired planning permission for the new stadium. In the intervening years the club ground-shared Broadwood Stadium, in Cumbernauld, the home of Clyde.

The ground is owned by Broomfield Stadium Ltd, previously Excelsior Stadium Ltd, [56] who rent the stadium to Airdrie, [57] with the stadium owners sitting on the Board of the club. It has an all-seated capacity of 10,101 [1] and at the end of the 2009–10 season, a new 3G artificial surface was installed. [58]

In 2003 a ground share was proposed with Falkirk as their ground did not meet SPL requirements; [59] this was later refused as Falkirk could not prove the SPL fixtures would have priority. [60] Queen of the South played their Uefa Cup tie in 2008 [61] at the stadium, as did Motherwell in 2009. [62] Queen's Park utilised the stadium for their "home" games from December 2013 until May 2014, due to the redevelopment of Hampden Park for the 2014 Commonwealth Games. [63] [64]

Airdrie United inherited Airdrieonians' distinctive playing colours of a white shirt with a red diamond. The design was the basis of Airdrieonians' nickname, The Diamonds, which has also been adopted by Airdrie.

The club badge of AFC, used for 26 years by the old club and three by the revival, was declared illegal in 2015.

When Airdrie United were formed, they used a blue double-headed eagle device on a white shield for their badge, with a red scroll below the shield that read "Airdrie United F.C.", amended to bearing "Airdrie F.C." when the club rebranded in 2012. [65] The eagle recalled the Airdrie town arms. [65]

When the club inherited the Airdrieonians name in 2013, they also restored the badge worn by their predecessors: [65] the original AFC bore this emblem from 1974 until their demise in 2002, excepting the 2000–01 season. [66] This badge featured a cockerel sitting atop a shield containing two lions passant and the club's initials. The club were informed by the Lord Lyon King of Arms in March 2015 that as their badge features a shield, it constitutes a heraldic device, and heraldic devices are not permitted to carry lettering. [67] On 19 June 2015, Airdrieonians unveiled a new crest, removing the shield and instead using a chevron–representing the "Airdrie Diamond"–to separate the scroll from the remainder of the badge. [68]

A Hall of Fame was established by the new club in 2002 to honour noted players of the previous entity (some of whom also played for the new club), with more entrants added each year. [85] 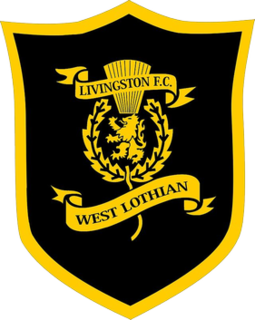 Airdrieonians Football Club, more commonly known as Airdrie, was a Scottish professional football team from the town of Airdrie, in the Monklands area of Lanarkshire.

Edinburgh City Football Club is a semi-professional senior Scottish football club which plays in Scottish League Two, the fourth tier of the Scottish Professional Football League. The club play at Meadowbank Stadium, having returned there in 2021 after groundsharing at Ainslie Park for four years.

The Excelsior Stadium, known as the Penny Cars Stadium for sponsorship reasons, is a football stadium in Airdrie, North Lanarkshire, Scotland. It is the home ground of Airdrieonians F.C. of the Scottish Professional Football League (SPFL), and is also being shared by Motherwell L.F.C. of the Scottish Women's Premier League (SWPL) and Glasgow University F.C. of the West of Scotland League during the 2020–21 season. It is an all-seater stadium with a capacity of 10,101.

The 2001–02 season was the 105th season of competitive football in Scotland. 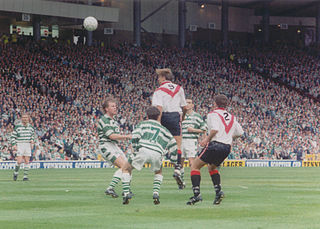 Paul George Armstrong is an Irish former professional footballer who played mainly as a midfielder. Armstrong played in both professional and semi-professional teams in England and Scotland and had international appearances for the Republic of Ireland U18 and U21 teams. 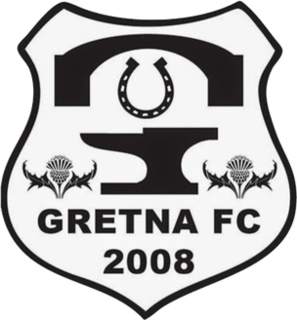 Gretna Football Club 2008 is a football club from the town of Gretna. It was founded in 2008 after the bankruptcy and demise of Gretna, which had existed since 1946. Gretna 2008 is not a direct continuation of the old club, being under a completely different management and set-up; the club trades under the name Gretna FC 2008 Ltd to avoid confusion with the old Gretna.

Section B are a hooligan firm of football supporters who follow Airdrieonians F.C., and before the current club's formation in 2002, followed the original Airdrieonians. The group, formed in 1977, have been well known throughout Scottish football for their boisterous, vociferous and often violent behaviour for over 40 years. The group is widely regarded as one of the most violent gangs in Scotland.