Stephen Edward Claridge (born 10 April 1966) is an English football pundit, coach and former player. He was a pundit for BBC Sport football shows including Football Focus and The Football League Show , until 2015 when he became both manager and a director at newly formed Salisbury. [2]

Claridge's career was known for its longevity and diversity. Born in Portsmouth, he has spent a number of periods with teams from Hampshire and Dorset, having begun his career with non-league Fareham Town in 1983. After failing to gain a permanent contract at local league club A.F.C. Bournemouth, Claridge spent three years at Weymouth, in his longest single spell with any club. From 1988 till 1996 Claridge played for a number of Football League teams, before moving to Leicester City with whom he played in the Premier League and won the 1997 Football League Cup. In 1998, he moved to Portsmouth, where he was also player manager from 2000 to 2001. After a spell with Millwall, he dropped down to the Southern Premier League to work as player-manager for Weymouth. After this ended in 2004, Claridge played for ten different clubs in a variety of leagues, never spending more than a season with one team. He has played at all levels of English football and has also appeared in 1000 professional or semi-professional football matches.

After formally retiring from football in 2007, Claridge moved into media work for the BBC. His experience of the Football League has been used to position him as an expert at that level, though he works across a variety of different football programmes on the BBC. After retirement he occasionally played semi-professional football for clubs in south England, most recently in 2017 for Salisbury.

Claridge was born in Portsmouth and grew up in Titchfield, a village near Fareham, and attended Brookfield Community School in Sarisbury Green. He was an adopted child. [3]

Claridge initially played for Fareham Town in the Southern League. He got into Football League side Bournemouth, though Claridge again stepped down the leagues after just seven games for Bournemouth to sign for Weymouth. [ citation needed ]

In October 1988 Claridge moved to Crystal Palace for a brief period before opting to join Division Four team Aldershot for season 88–89. He spent two years with the club before signing with Cambridge United for £75,000. He moved with Cambridge up into the Second Division (which later became the First Division) and stayed with the club for most of the next four years. His tempestuous relationship with manager John Beck, which was exacerbated by Claridge's gambling problems, [4] eventually led to his being sold to Luton Town for only £120,000 in March 1992. With Luton in financial difficulties however he was sold back to Cambridge, for £190,000, just five months later (Beck having left the club by this time).

In January 1994 Claridge moved to Birmingham City for £350,000. In 1994–95, he became the first player since Trevor Francis to score 20 goals in a season for Birmingham, a performance that earned him the club's Player of the Year award. [5] Claridge was transferred to Leicester City for £1.2 million in March 1996. It was at Leicester that Claridge reached the Premiership, scoring winning goals in both the 1996 play-off final that gave Leicester promotion and the 1997 League Cup final replay. In 1997 his autobiography Tales From The Boot Camps, co-written with Ian Ridley, was first published.

In 1998 Claridge joined hometown club Portsmouth on loan and, following a brief period at Wolverhampton Wanderers, signed for Portsmouth on a permanent basis. From 2000 this was as a player-manager, though Claridge's reign lasted for just twenty-five games before he was demoted. After a period on loan with Millwall, he moved to the London club on a free transfer in 2001. He spent two seasons with Millwall before returning to Weymouth as the club's new player-manager. Weymouth just missed out on promotion to the Football Conference. Following Ian Ridley's resignation as chairman, Claridge also left to return to playing league football.

In his later playing career, chronologically, Claridge played for Brighton and Hove Albion, Brentford, Wycombe Wanderers, Gillingham, Bradford City and Walsall. In the summer of 2005 he was appointed as manager of Millwall, but following board-room changes he was relieved of his duties after just 36 days, before his team had played any competitive matches. His replacement was Colin Lee. The decision to dismiss Claridge was taken by new chairman Theo Paphitis, [6] who stated to the BBC that "we had a strong chance of being relegated under Steve". Millwall were indeed relegated from the Championship that season.

At the start of the 2006–07 season Claridge didn't have a club. [7] It was reported that Claridge had offered to play without payment in order to achieve the landmark of 1,000 games. Eventually in December 2006 he re-signed on a month-long contract with Bournemouth [8] and his 1,000th first-team match was a 4–0 defeat to Port Vale on 9 December, at age 40. [9]

On 16 January 2007 he signed a contract with Isthmian League Premier Division side Worthing to play in one game only, against AFC Wimbledon. The match ended in a 1–1 draw. [10]

In September 2009, Claridge came out of retirement to play unpaid for his former club, the Conference South side Weymouth, who were in severe financial difficulties. [12] [13]

Claridge then came out of retirement once more in October 2011 when he signed for Gosport Borough of the Southern League Division One South & West as a player-coach. [14] On 22 October 2011, Claridge scored on his début for Gosport during their FA Trophy game against Southern League side Sholing; [15] his first league goal came a week later on 29 October 2011 in a 2–1 defeat of Mangotsfield United at Privett Park [16]

On 7 May 2012, Gosport were promoted to the Southern League Premier Division courtesy of Claridge's brace of goals in the play-off final against Poole Town. Having been losing 1–0, Claridge scored a last-gasp equaliser in the first minute of injury time to send the tie to extra-time; Claridge scored Gosport's third goal in the 98th minute as they ran out eventual 3–1 winners, and returned to the Premier Division after a 22-year absence. [17]

Shortly after the playoff final, Claridge said he was contemplating retirement, [18] however he later admitted he was considering playing for a further season following Gosport's promotion. [19]

On 1 July 2017, the 51-year-old Claridge played for Salisbury in a friendly against Portsmouth due to a lack of players. Salisbury lost the match 3–0. [20] On 15 August, he played in a Southern League Division One South & West match against Paulton Rovers, playing himself as a 78th-minute substitute in a 2–2 draw; [21] he also started Salisbury's next match, a 3–2 FA Cup victory over Fareham Town, substituting himself off after 71 minutes [22] after sustaining an injury. In an interview with BBC Sport in 2018, Claridge revealed that he had retired from playing as a result of this injury. [23]

During Claridge's time at Weymouth, he and Ian Ridley, who was club chairman at the time, were two of the subjects of a BBC documentary called Football Stories; he left Weymouth to begin to work in the media, initially for BBC Radio 5 Live. He works for the BBC mainly on The Football League Show, and stated his opposition to the use of goal-line technology. He also has contributed scouting reports to The Guardian . [24]

In June 2008, Claridge was convicted of dangerous driving and sentenced to six months' imprisonment, suspended for two years, after speeding at 100 mph (160 km/h) in "treacherous" conditions. He already had nine points on his driving licence. [25]

Weymouth Football Club is an English semi-professional football club based in the town of Weymouth, Dorset. They currently compete in the Vanarama National League and play their home matches at the Bob Lucas Stadium. The club is affiliated to the Dorset County Football Association and is an FA chartered Standard club. Their first team manager is Brian Stock.

Edward John Frank Howe is an English professional football manager and former player. After taking charge of Bournemouth on the brink of relegation from the Football League in 2008, Howe guided the club from the bottom of League Two to the Premier League for the first time in the club's history. He was named Football League Manager of the Decade in 2015 following three promotions in a seven-year period.

Samuel Gary Igoe is an English former professional footballer who played as a midfielder during his career.

James Alan John Harper is an English footballer who plays for Uxbridge. 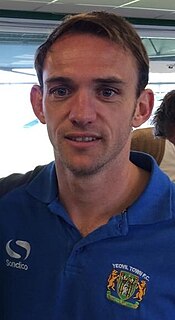 James Edward Hayter is an English footballer who plays as a forward; he last played for Weymouth FC. He holds the record for the fastest Football League hat-trick ever and has been on the winning side in three Football League play-off finals.

Thomas Widdrington is an English former football player and manager who is now a Director at Bristol Rovers.

Lee Alexander Molyneaux is an English footballer who plays as a defender for Baffins Milton Rovers. He is the former manager of Gosport Borough. 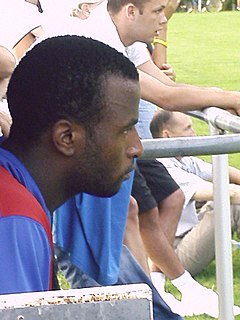 Stéphane Zubar is a Guadeloupean footballer who plays as a defender for Southern League Division One South club A.F.C. Totton. He is the younger brother of Ronald Zubar and cousin of Claude Dielna, both of them being footballers.

Jason James Tindall is an English professional football manager and former player, who is currently a coach for Sheffield United. 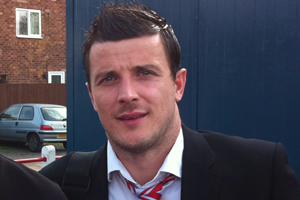 Craig McAllister is a Scottish semi-professional footballer who plays for Alresford Town.

Matthew Thomas Ritchie is a professional footballer who plays as a winger for Premier League club Newcastle United. Until 2018, he played for the Scotland national team. He previously played for Portsmouth, Swindon Town and Bournemouth. He joined Newcastle United in 2016.

Mark Clifford Molesley is a retired professional footballer and football manager. He has played in the Football League for Bournemouth, Aldershot Town, Plymouth Argyle and Exeter City, and the Football Conference for Hayes, Cambridge City, Aldershot Town, Stevenage Borough and Grays Athletic.

Matthew Stephen Tubbs is an English professional footballer who plays as a striker, most recently for Southern League South Division club Gosport Borough.

Benjamin Matthew "Ben" Wright is an English footballer who plays for Basingstoke Town, as a striker.

Christian Benjamin Oxlade-Chamberlain is an English professional footballer who plays for Gosport Borough.