In 2008, Netball Australia and Netball New Zealand joined forces and created a Trans-Tasman league, the ANZ Championship as a successor to the Commonwealth Bank Trophy in Australia and the National Bank Cup in New Zealand, both of which were retired after 2007. The ANZ Championship saw netball become a semi-professional sport in both countries, with increased media coverage and player salaries. The 2016 season was the last of the competition, as Netball Australia looked to create a nationally exclusive league with a significantly improved broadcasting and media deal. This instigated the creation of Suncorp Super Netball, announced in May 2016. [1] [2] [3] The New Zealand successor to the previous ANZ Championship is the ANZ Premiership. [4]

Expansion teams Sunshine Coast Lightning and Giants Netball met in the Grand Final in the competition's inaugural season, the Lightning winning the match 65–48 before a crowd of 8,999 at the Brisbane Entertainment Centre. [6] [7]

The league is run by the Suncorp Super Netball Commission, an independent commission formed in January 2019 to oversee and make all decisions relating to the league. The commission replicates the examples set by Australia's two most popular football codes, the AFL and NRL and consists of six independent commissioners and the CEO of Netball Australia. [8] [9]

The league introduced a new ladder system for the 2018 season. In any game the winning team receives four points, with the loser receiving none. In the event of a draw, points are split. In addition to these points, the winner of each quarter is awarded a point. Drawn quarters result in no points being awarded. Thus, teams can win up to eight points in a match. [10] If two teams finish the regular season on the same number of points, their final position on the ladder is determined by the number of wins and not percentage. If teams are tied on points and number of wins are equal, then goal percentages during the home and away rounds are used to determine the rank. [11]

In 2020 the point for winning a quarter was abolished and the super goal (scoring 2) was introduced.

A total of six major awards are issued at the conclusion of each Super Netball season. These awards are:

Currently, the Player of the Year is Jhaniele Fowler (West Coast Fever), the Grand Final MVP is Mwai Kumwenda (Melbourne Vixens), the Rising Star is Maisie Nankivell (Adelaide Thunderbirds), the Coach of the Year is Simone McKinnis (Melbourne Vixens) and the Leading Goalscorer is Jhaniele Fowler (West Coast Fever), who scored 795 goals in the 2020 regular season. The players represented the clubs referred to in the 2020 season.

The Nine Network and Telstra are the current broadcasters of Suncorp Super Netball. Netball Australia signed a five year deal with the broadcasters which commenced from the 2017 season. Under the provisions of the deal Nine televise two matches per round live on either their primary channel or on secondary channel 9Gem, whilst Telstra broadcast all four matches per round. The service is available via Telstra TV and the Netball Australia app. Finals matches are broadcast live on both entities. [12] Will McCloy and Catherine Cox host the Super Netball Show. [13]

In 2022 the broadcast rights will be taken over by Foxtel. The new five year deal will result in all regular season and finals matches broadcast live on the pay-tv provider and its over-the-top streaming service Kayo . Two matches per round and all finals matches will be streamed live via the free-access Kayo Freebies program. [14]

As of 2019 the salary cap for each team in the league is A$515,000, with an additional $150,000 available for clubs to provide players with employment, education and/or ambassador roles. Players are also provided with a private health insurance allowance that as of 2019 is capped at $1,635. [15] The average player salary is $67,000 and the minimum amount a contracted player can earn is $30,000, making Super Netball the country's leading player payment system for women athletes. [16]

All playing and training equipment as well as all licensed apparel and hats for the league's eight clubs are manufactured by ASICS.

Other league sponsors include Australian Institute of Sport, Nissan Australia and Cadbury

Official match day attire together with other club merchandise is sold through the Super Netball's stores and website as well through the clubs and through some retailers.

Tap'n'Play decided to enter the Netball trading card market. In 2018 they produced their first very basic release but in 2019 they have ramped it with a release full of colour and signature cards.

The ANZ Championship was the premier netball league in Australia and New Zealand. The competition was held annually between April and July, comprising 69 matches played over 17 weeks. It was contested by ten teams, five from Australia and five from New Zealand. The competition was administered by Trans Tasman Netball League, which was formed as a joint venture by the netball governing bodies of both countries. ANZ Bank was naming sponsors of the competition since its inaugural season. 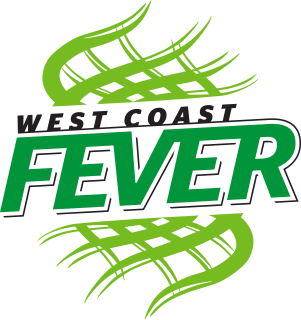 West Coast Fever are an Australian netball team based in Perth, Western Australia. Since 2017 they have played in the Suncorp Super Netball league. Between 2008 and 2016, they participated in the ANZ Championship. Between 1997 and 2007 they competed in the Commonwealth Bank Trophy, where they were known as the Perth Orioles. Historically an underachieving team, the Fever have in more recent times qualified for finals matches, though are yet to win a premiership. Their best results thus far are narrow defeats in the 2018 and 2020 grand finals.

Caitlin Thwaites is an Australian netball player and volleyballer.

Geva Kate Mentor, CBE is an English International netball player. Mentor was selected for the England national team in 2000, debuting the following year against New Zealand, at age 16. She currently plays for the Collingwood Magpies in the Australian Super Netball league, and prior to that was a two-time premiership captain at the Sunshine Coast Lightning.

Joanne Elizabeth Harten, also referred to as Jo Harten, is an England netball international. She was a member of the England team that won the gold medal at the 2018 Commonwealth Games. In 2020 she received an for her services to netball. She was also a member of the England teams that won bronze medals at the 2010 Commonwealth Games and at the 2011, 2015 and 2019 Netball World Cups. At club level she has played in grand finals for Galleria Mavericks, Loughborough Lightning and Giants Netball. Harten has captained Loughborough Lightning, Giants and England teams.

Jhaniele Fowler is a professional Jamaican netball player and as of 2018 a member of the West Coast Fever in the Suncorp Super Netball League. Fowler also plays domestic netball in Jamaica for the Waulgrovians club, and has been a member of the Jamaica national netball team since 2010.

Stephanie Wood, also known as Steph Wood, is an Australia netball international. Wood was a member of the Australia teams that won the silver medals at the 2018 Commonwealth Games and at the 2019 Netball World Cup. Between 2015 and 2016, Wood played for New South Wales Swifts in the ANZ Championship. Since 2017 she has played for Sunshine Coast Lightning in Suncorp Super Netball. Between 2015 and 2019, she played and scored in five successive grand finals, winning premierships with Sunshine Coast Lightning in 2017 and 2018.

The Sunshine Coast Lightning is an Australian netball team in Sunshine Coast, Queensland which competes in the premier domestic league, Suncorp Super Netball. The team were formed in 2016 as the second Queensland-based side, during the disbanding of the ANZ Championship. The team is a joint venture owned by the Melbourne Storm and University of the Sunshine Coast. In their four years of competition in Super Netball, the Lightning have won two premierships and featured in three grand finals.

Giants Netball is an Australian netball team in Sydney which competes in Suncorp Super Netball. The team represents the Greater Western Sydney region of New South Wales. The team was formed in 2016, during the disbanding of the ANZ Championship. Giants Netball is owned by Netball NSW' and is aligned with the Australian Football League club, the Greater Western Sydney Giants. The Giants play most home matches at the 10,500 seat Ken Rosewall Arena, which it will call home from the 2021 season.

The 2017 Suncorp Super Netball season was the inaugural season of the premier netball league in Australia, following the disbanding of the ANZ Championship in 2016. The regular season began on 18 February 2017 and concluded with the Grand Final on 17 June 2017.

The 2018 Suncorp Super Netball season was the second season of the premier netball league in Australia. The season began on 28 April and concluded with the Grand Final on 26 August 2018. The start of the season was delayed to late April due to the 2018 Commonwealth Games, which was held earlier that month on the Gold Coast. The fixtures for the season were released on 11 October 2017.

Kelsey Browne is an Australian netball player in the Suncorp Super Netball league, playing for the Collingwood Magpies.

The 2019 Suncorp Super Netball season was the third season of the premier netball league in Australia. The season began on 27 April and concluded on 15 September 2019, however it was suspended for most of the month of July due to the Netball World Cup, which was played in Liverpool.

Annika Lee-Jones is an Australian netball player in the Suncorp Super Netball league, playing for the Sunshine Coast Lightning.

Laura Scherian is an Australian netball player in the Suncorp Super Netball league, playing for the Sunshine Coast Lightning.

Shannon Eagland is an Australian netball player in the Suncorp Super Netball league, playing for the West Coast Fever.

The 2020 Suncorp Super Netball season was the fourth season of the premier netball league in Australia. The season was originally scheduled to commence on 2 May, though was delayed to 1 August due to the COVID-19 pandemic. The defending premiers, New South Wales Swifts were eliminated in the first week of the finals series by the eventual runners-up West Coast Fever. The premiers were the Melbourne Vixens, who defeated the Fever by two goals in the Grand Final at Nissan Arena in Brisbane.

The 2021 Suncorp Super Netball season is the fifth season of the premier netball league in Australia. The season commenced on 1 May and will conclude on 29 August. The defending premiers are the Melbourne Vixens.