The first literary works date back to the beginning of the 18th century, when all Swahili literature was written in the Arabic script. Jan Knappert considered the translation of the Arabic poem Hamziya from the year 1652 to be the earliest Swahili written text. Starting in the 19th century, missionaries and orientalists introduced the Latin script for writing the Swahili language.

Swahili literature has been an object of research by many western scholars since the 19th century. There is a debate regarding objectivity as a few scholars tried to establish a canon of Swahili writing. [2]

Swahili literature has been sometimes characterized as Islamic by some western scholars such as Jan Knappert. This approach was criticized by some experts such as Alamin Mazrui and Ibrahim Noor Shariff. [4] In fact, Swahili poetry has produced many secular works by such poets as Muyaka bin Ghassany and Muhammad Kijuma. [5]

Because of this orientalist exploration and interest in the Swahili culture and language, most of the theses made on the Swahili literature have been done outside of the native place. [6]

Swahili literature is classified into three genres: Riwaya (the novel), tamthilia (drama/play) and ushairi (poetry). [7] Scholars, however, cite the problem in the literary classification because the sense of orientation associated to genre does not work properly for Swahili literature. [8] The lack of clear and decisive parameters for genres can be illustrated by the convergence of oral and written literary forms. [9] Rajmund Ohly noted that the names of genres are not well defined while denominations are too vague to distinguish class divisions. [8]

Fiction in Swahili literature mainly consisted of oral narrative traditions. It was not until the 1940s that Swahili started to have a written fiction. Modern Swahili literature is a direct result of the standardization of Swahili. Previously, writers would write in a particular dialect to show their attachment to a certain dialect, such as Lamu, Tanga or Mombasa. The normalization of Swahili motivated writers, such as George Mhina and Lyndon Harries to promote the development of Swahili by creating a literary corpus. [10]

Generally, Swahili poetry is derived from Arabic poetry. Swahili poetry or "ushairi" (from Arabic : Shîir, poetry) is still written in the traditional manner. According to an account, the traditional poetry is created to be sung rather than read. [11] It began in the northern Kenya coastal towns of Lamu and Pate before spreading to Tanga Region, Zanzibar and other nearby areas. [12] The poetic tradition is still alive today as pieces are often published in local newspapers and used in taraab songs and musical theater popular in Zanzibar and the Swahili coast. [11]

However, there are a few fundamental differences between the Swahili and Arabic poetry. With much of African influence, the two poems can hardly be compared for it is sui generis . [13]

Traditional poetry can be classified into different groups according to its form and content. It can be epic, lyrical or didactic, as well as religious or secular. [14] Examples of narrative poetry, known as utenzi, include the Utendi wa Tambuka by Bwana Mwengo (dated to about 1728) and the Utenzi wa Shufaka.

Use of Swahili prose was until recently practically restricted to utilitarian purposes. However, the traditional art of oral expression in poetry has produced a number of valuable works. It is characterized by its homiletic aspects, heroic songs, folklore ballads and humorous dialogues which accurately depict Swahili life, cultural beliefs and traditions. Because of the immediate historical aspect of the Swahili literature, especially in the 19th century, it is still a hard job to interpret many of the poems due to the lack of knowledge of the context in which the poem was written. 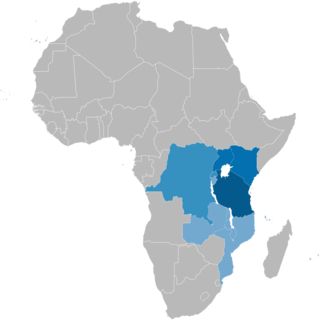 Swahili, also known by its native name Kiswahili, is a Bantu language and the native language of the Swahili people. It is a lingua franca of the African Great Lakes region and other parts of East and Southern Africa, including Tanzania, Uganda, Rwanda, Burundi, Kenya, some parts of Malawi, Somalia, Zambia, Mozambique, and the Democratic Republic of the Congo (DRC). Comorian, spoken in the Comoros Islands, is sometimes considered a dialect of Swahili, although other authorities consider it a distinct language. Swahili has a 16–20% Arabic loanwords in the language, including the word swahili, from Arabic sawāḥilī. The Arabic loanwords date from the contacts of Arabian traders with the Bantu inhabitants of the east coast of Africa over many centuries. Under Arab trade influence, Swahili emerged as a lingua franca used by Arab traders and Bantu peoples of the East African Coast. 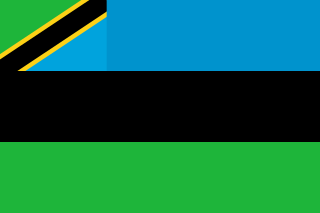 Zanzibar is an insular autonomous region of Tanzania. It is composed of the Zanzibar Archipelago in the Indian Ocean, 25–50 kilometres (16–31 mi) off the coast of the mainland, and consists of many small islands and two large ones: Unguja and Pemba Island. The capital is Zanzibar City, located on the island of Unguja. Its historic centre is Stone Town, a World Heritage Site.

Sheng is a Swahili and English-based cant, perhaps a mixed language or creole, originating among the urban youth of Nairobi, Kenya, and influenced by many of the languages spoken there. While primarily a language of urban youths, it has spread across social classes and geographically to neighbouring Tanzania and Uganda. 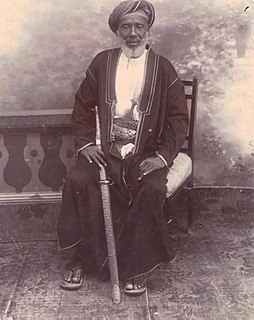 Tippu Tip, or Tippu Tib, real name Hamad bin Muhammad bin Juma bin Rajab el Murjebi, was an Afro-Arab ivory and slave trader, explorer, governor and plantation owner. He worked for a succession of the sultans of Zanzibar. Tippu Tip traded in slaves for Zanzibar's clove plantations. As part of the large and lucrative ivory trade, he led many trading expeditions into Central Africa, constructing profitable trading posts deep into the region. He bought the ivory from local suppliers and resold it for a profit at coastal ports. He was also the most well known slave trader in Africa, supplying much of the world with black slaves.

Taarab is a music genre popular in Tanzania and Kenya. It is influenced by the musical traditions of the African Great Lakes, North Africa, the Middle East, and the Indian subcontinent. Taarab rose to prominence in 1928 with the advent of the genre's first star, Siti binti Saad. 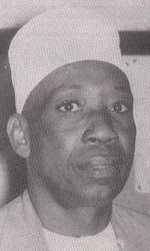 Shaaban bin Robert, also known as Shaaban Robert, was a Tanzanian poet, author, and essayist who supported the preservation of Tanzanian verse traditions. Robert is celebrated as one of the greatest Tanzanian Swahili thinkers, intellectuals and writers in East Africa and has been called "poet laureate of Swahili" and is also known as the "Father of Swahili." He is also honoured as the national poet.

The Swahili people are a Bantu ethnic group inhabiting East Africa. Members of this ethnicity primarily reside on the Swahili coast, in an area encompassing the Zanzibar archipelago, littoral Kenya, the Tanzania seaboard, northern Mozambique, the Comoros Islands, and Northwest Madagascar. More recently, Swahili identity is centered around any person of African descent who speaks Swahili as their first language, is muslim and lives in a town on the main urban centers of most of modern day Tanzania and coastal Kenya, northern Mozambique and the the Comoros, through a process of swahilization. 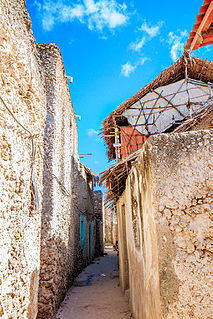 Pate (Paté) Island is located in the Indian Ocean close to the northern coast of Kenya, to which it belongs. It is the largest island in the Lamu Archipelago, which lie between the towns of Lamu and Kiunga in the former Coast Province. The island is almost completely surrounded by mangroves.

African literature is literature from Africa, either oral ("orature") or written in African and Afro-Asiatic languages. 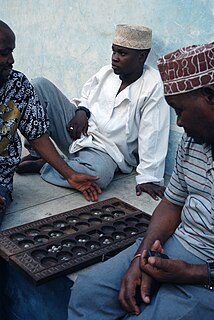 Swahili culture is the culture of the Swahili people inhabiting the Swahili coast. This littoral area encompasses Tanzania, Kenya, and Mozambique, as well as the adjacent islands of Zanzibar and Comoros and some parts of Malawi. They speak Swahili as their native language, which belongs to the Bantu language family. Graham Connah described Swahili culture as at least partially urban, mercantile, literate, and Islamic. 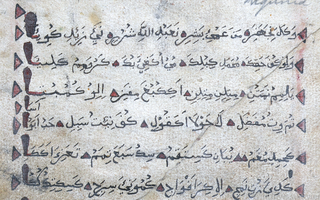 Dr. Jan Knappert was a well-known expert on the Swahili language. He was also an Esperantist, and he wrote an Esperanto-Swahili dictionary.

Utenzi or utend̠i is a form of narrative poetry in Swahili. Its name derives from the fact that it usually describes heroic deeds, like the medieval European gesta. Utendi, plural tendi, meaning "act" or "deed", is derived from the Swahili verb ku-tenda "to do". Well-known examples of utenzi are the Utendi wa Tambuka by Bwana Mwengo, the Utenzi wa Shufaka, and the Utenzi wa vita vya Uhud compiled around 1950 by Haji Chum. Reciting utenzi is a popular pastime on weddings and other ceremonies and feasts; often, specialized narrators are invited to do this.

Kenyan literature describes literature which comes from Kenya. Kenya has a long oral and written literary tradition, primarily in English and Swahili, the two official languages of the country.

Ali Muhsin Al-Barwani was a Zanzibari politician and diplomat under the Sultanate of Zanzibar. He was the only Arab foreign minister of an independent Zanzibar before the establishment of the People's Republic of Zanzibar. When his government was overthrown in January 1964 Barwani was held in detention centers across Tanzania until his release in 1974, when he fled to Kenya as a refugee. After obtaining refugee status, Barwani moved to Cairo then back to Kenya then to Dubai in the United Arab Emirates. In the UAE, Barwani translated the Qur'an into Swahili Qur'an for which he is most prominently known.

Chama cha Kiswahili cha Taifa is a Kenyan institution founded in 1998 responsible for the promotion of the Swahili language in Kenya. The Founding Chair is Prof. Kimani Njogu, a graduate of Yale University's department of Linguistics.

Ebrahim Hussein is a Tanzanian playwright and poet. His first play, Kinjeketile (1969), written in Swahili, and focussing on a leader of the Maji Maji Rebellion, is considered "a landmark of Tanzanian theater." The play soon became one of the standard subjects for Swahili exams in Tanzania and Kenya. By 1981, it had been reprinted six times.

Up to the second half of the 20th century, Tanzanian literature was primarily oral. Major oral literary forms include folktales, poems, riddles, proverbs, and songs. The majority of the oral literature in Tanzania that has been recorded is in Swahili, though each of the country's languages has its own oral tradition. The country's oral literature is currently declining because of social changes that make transmission of oral literature more difficult and because of the devaluation of oral literature that has accompanied Tanzania's development. Tanzania's written literary tradition has produced relatively few writers and works; Tanzania does not have a strong reading culture, and books are often expensive and hard to come by. Most Tanzanian literature is orally performed or written in Swahili, and a smaller number of works have been published in English. Major figures in Tanzanian modern literature include Shaaban Robert, Muhammed Said Abdulla, Aniceti Kitereza, Ebrahim Hussein, Abdulrazak Gurnah and Penina Muhando.

Farouk Mohamedhusein Tharia Topan is the director of the Swahili Centre at the Aga Khan University. He is a specialist in the language and literature of the Swahili people. He has taught at the University of Dar es Salaam, the Institute of Ismaili Studies, and the School of Oriental and African Studies.

Haji Gora Haji was a Swahili-language poet, lyricist, and writer from the Zanzibar archipelago. He channeled his expansive knowledge of the culture and society of the Swahili coast, especially his homeland of Tumbatu, into his works. For his work inspired by the seascape of his home, he has been called "The Old Typhoon". He worked in a multitude of forms, from songs, stories, and epics to a full-length novel. His compositions and verse were frequently on Tanzanian radio.