The Harvester is a 1936 American comedy film directed by Joseph Santley and written by Homer Croy, Robert Lee Johnson, Elizabeth Meehan and Gertrude Orr. It is based on the 1911 novel The Harvester by Gene Stratton-Porter, which had previously been turned into a 1927 silent film of the same title. The film stars Alice Brady, Russell Hardie, Ann Rutherford, Frank Craven, Cora Sue Collins and Emma Dunn. The film was released on April 18, 1936, by Republic Pictures. [1] [2] [3]

In rural 1890s Indiana, farmer David Langston, a single man who has focused his time on his work, is pressured to wed the daughter of the wealthy Mrs. Biddle, Thelma. While David's orphaned friend, Ruth Jameson, is in love with him, David ends up accepting Mrs. Biddle's demands and agrees to wed Thelma. After technological advancements make their way to the town, Mrs. Biddle attempts to pressure David to leave his job as a farmer and join her husband, Mr. Biddle, in a career of real estate. However, Mr. Biddle, who is discontented with his current life, cautions David against selling his farm. Meanwhile, Mrs. Biddle, in an effort to secure David's marriage to her daughter, has Ruth's younger sister, Naomi, whom he adores, put into an orphanage.

Soon after, Ruth's grandmother, who opposed David's marriage to Thelma, dies, David and Ruth are drawn closer together, making David question his decision, and soon figures out Mrs. Biddle put Naomi in the orphanage. David then publicly confronts Mrs. Biddle, and boldly announces his intentions to adopt Naomi himself. Thelma, infuriated, breaks their engagement, and Ruth, David, and Naomi are reunited, with David deciding to remain a harvester. [1] [2] [3]

Criticisms of the Film

This adaptation of the original 1911 novel by Gene Stratton-Porter features many plot differences, which some claim detract from the overall quality of the film. This is especially true considering how well received the novel was at publication. [4] According to a review published by the New York Times, there "has been lost the simple nobility of its central figure that made the book a best seller when it was written." [2] The author of this review, referenced as J.T.M., claims the movie could not be seen as parallel to the vision Stratton-Porter had when writing the novel. The portrayal of the titular figure, David Langston, is seen as "a most naïve young man, far too easily urged away from his herb patches and the rural destiny that so patently befits him by an extremely transparent plot of feminine scheming." [2]

Gene Stratton-Porter, born Geneva Grace Stratton, was an American author, nature photographer, and naturalist from Wabash County, Indiana. In 1917 Stratton-Porter urged legislative support for the conservation of Limberlost Swamp and other wetlands in Indiana. She was also a silent film-era producer who founded her own production company, Gene Stratton Porter Productions, in 1924. 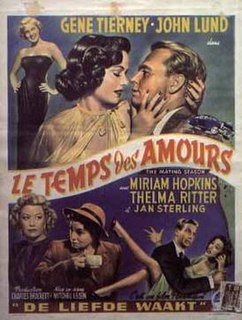 The Mating Season is a 1951 film made by Paramount Pictures. A farce with elements of screwball comedy, it was directed by Mitchell Leisen, and produced by Charles Brackett from a screenplay by Charles Brackett, Richard Breen, and Walter Reisch, based on the play Maggie by Caesar Dunn. The ensemble cast stars Gene Tierney, John Lund, Miriam Hopkins, and Thelma Ritter.

A Girl of the Limberlost, a novel by American writer and naturalist Gene Stratton-Porter, was published in August 1909. It is considered a classic of Indiana literature. It is the sequel to her earlier novel Freckles.

This is a list of bestselling novels in the United States in the 1910s, as determined by The Bookman, a New York-based literary journal and Publishers Weekly. The list features the most popular novels of each year from 1910 through 1919. 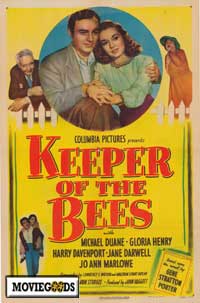 The Suspect is a 1944 American film noir directed by Robert Siodmak, set in London in 1902, in Edwardian times. It is based on the 1939 novel This Way Out, by James Ronald, and was released by Universal Pictures. It stars Charles Laughton and Ella Raines.

Cora Unashamed is a 2000 American made-for-television drama film from The American Collection directed by Deborah Pratt, starring Regina Taylor and Cherry Jones. The film was shot on location in October 1999 in central Iowa. Cities such as Ames, Cambridge and Story City were used. The movie is based on a short story by the same name in The Ways of White Folks, a 1934 collection of short stories by Langston Hughes. Cinematographer Ernest Holzman won an American Society of Cinematographers (ASC) Award, for Outstanding Achievement in Cinematography in Movies of the Week/Mini-Series'/Pilot for Network or Basic Broadcast TV, for his work on this film. David Herbert Donald called the short story "a brilliantly realized portrait of an isolated black woman in a small Middle Western town, who stoically survives her own sorrows but in the end lashes out against the hypocrisy of the whites who employ her."

Romance of the Limberlost is a 1938 American drama film directed by William Nigh and starring Jean Parker, Eric Linden, and Marjorie Main.

Laddie is a 1935 American comedy-drama film directed by George Stevens from a screenplay by Ray Harris and Dorothy Yost, based on the 1913 novel, Laddie: A True Blue Story, by Gene Stratton-Porter. The film stars John Beal, Gloria Stuart, and Virginia Weidler.

The Whistle at Eaton Falls is a 1951 American film noir drama film directed by Robert Siodmak and starring Lloyd Bridges and Dorothy Gish.

As the Earth Turns is a 1934 American pre-Code drama film directed by Alfred E. Green and starring Jean Muir and Donald Woods, based on a Pulitzer Prize-nominated best-selling novel by Gladys Hasty Carroll.

Laddie is a 1926 American drama film directed by James Leo Meehan with John Bowers in the title role. It was based on Gene Stratton-Porter's novel, Laddie, A True Blue Story (1913).

James Leo Meehan (1891–1943) was an American film director and screenwriter. He married the daughter of writer Gene Stratton-Porter, and adapted several of his mother-in-law's novels for the screen.

The Harvester is a 1927 American silent comedy film directed by James Leo Meehan and starring Orville Caldwell, Natalie Kingston and Will Walling. It is an adaptation of the 1911 novel of the same name by Gene Stratton-Porter, which was later remade as a sound film in 1936.