The Motion Lounge was a Williamsburg, Brooklyn, nightclub owned by Charlie and Marie Cipolla. This was the headquarters for the Bonnano crime family under Dominick “Sonny Black” Napolitano. The lounge was located at 420 Graham Avenue, across the street from the Wither's Italian-American War Veterans Club that first opened in 1967. It was one of the central locations in FBI agent Joseph D. Pistone's six-year undercover operation to infiltrate the Mafia, and featured prominently in his autobiography Donnie Brasco: My Undercover Life in the Mafia . A fictionalized version of the lounge featured in the film adaptation, Donnie Brasco .

Williamsburg is a neighborhood in the New York City borough of Brooklyn, bordered by Greenpoint to the north; Bedford–Stuyvesant to the south; Bushwick and East Williamsburg to the east; and the East River to the west. As of the 2010 United States Census, the neighborhood's population is 32,926.

A nightclub, music club or club, is an entertainment venue and bar that usually operates late into the night. A nightclub is generally distinguished from regular bars, pubs or taverns by the inclusion of a stage for live music, one or more dance floor areas and a DJ booth, where a DJ plays recorded music. The upmarket nature of nightclubs can be seen in the inclusion of VIP areas in some nightclubs, for celebrities and their guests. Nightclubs are much more likely than pubs or sports bars to use bouncers to screen prospective clubgoers for entry. Some nightclub bouncers do not admit people with informal clothing or gang apparel as part of a dress code. The busiest nights for a nightclub are Friday and Saturday night. Most clubs or club nights cater to certain music genres, such as house music or hip hop. Many clubs have recurring club nights on different days of the week. Most club nights focus on a particular genre or sound for branding effects.

Joseph Dominick "Joe" Pistone, alias Donnie Brasco, is a former FBI agent who worked undercover for six years infiltrating the Bonanno crime family and to a lesser extent the Colombo crime family, two of the Five Families of the Mafia in New York City. Pistone was an FBI agent for 17 years.

Zips is a slang term often used as a derogatory slur by Italian American and Sicilian American mobsters in reference to newer immigrant Sicilian and Italian mafiosi. The name is said to have originated from mobsters' inability to understand the faster-speaking Sicilian dialects, which appeared to "zip" by. Other theories include pejorative uses such as Sicilians' preference for silent, homemade zip guns. According to still another theory, the term is a contraction of the Sicilian slang term for "hicks" or "primitives." The older Sicilian mafiosi of the pre-Prohibition era known as "Mustache Petes" were also referred to as "zips". 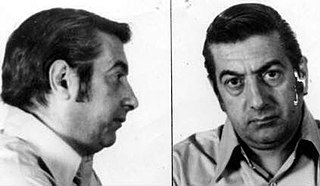 The Way of the Wiseguy, by Joseph D. Pistone, is a non-fiction description of Mafia personalities and culture, published in 2004. The author, Joseph D. Pistone, spent six years undercover for the FBI infiltrating New York organized crime. 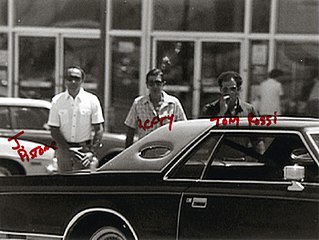 Benjamin Ruggiero, also known as "Lefty", "Lefty Guns", and "Lefty Two Guns", was a soldier in the Bonanno crime family. He is well known for his friendship and mentorship of FBI undercover agent Joseph "Donnie Brasco" Pistone. Ruggiero was an old school Cosa Nostra mobster who knew how Mafia politics worked. Ruggiero allegedly murdered around 26 people and refused to break omertà when arrested.

Alfred "Al Walker" Embarrato a.k.a. "Alfred Scalisi" a.k.a." Aldo Elvorado" was a New York mobster who became a caporegime of the Bonanno crime family and a powerful labor figure at The New York Post distribution plant.

Anthony "Bruno" Indelicato, also known as "Bruno" and "Whack-Whack", is a capo with the Bonanno crime family of New York City. 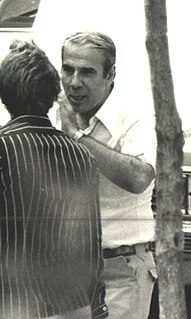 Anthony "Tony" Mirra was an Italian-American mobster, soldier and later caporegime for the Bonanno crime family. He is well known for being the individual who introduced FBI Special Agent Joseph "Donnie Brasco" Pistone into the Bonanno family.

Joseph D'Amico, also known as "Joey The Mook," was a made man in the Bonanno crime family who later turned government informant. "Mook" is Italian-American slang for knucklehead or idiot. D'Amico was a long-time street soldier who worked under his cousin, Richard Cantarella.

Michael "Mimi" Sabella (1911–1989) was a caporegime in the Bonanno crime family and a relative of Philadelphia crime family mob boss Salvatore Sabella.

Joaquín "Jack" García is a Cuban-American retired FBI agent, best known for his undercover work infiltrating the Gambino crime family in New York City. García is regarded as one of the most successful and prolific undercover agents in the history of the FBI.

Donnie Brasco: My Undercover Life in the Mafia is a 1988 autobiographical crime book written by Joseph D. Pistone about his story as an FBI agent going undercover and infiltrating the Mafia. In 1997, the book was made into a feature film titled Donnie Brasco, starring Johnny Depp and Al Pacino. Louis DiGiaimo, a casting director who worked on The Godfather and a childhood friend of Pistone, consulted on the book and film. The book was re-released in a second edition the same year the film was released.

Falcone is an American crime drama television series that ran for one season on CBS from April 4 until April 12, 2000. The story follows Joseph D. Pistone, an FBI agent who goes undercover to bring down the Mafia. The events depicted were based on a true story, which was also portrayed in the film Donnie Brasco, which was originally on the autobiographical book Donnie Brasco: My Undercover Life in the Mafia by Joseph D. Pistone and Richard Woodley.

Philip "Rusty" Rastelli was a New York mobster and former boss of the Bonanno crime family, though he spent all but two years of his reign in prison.

Nicholas Marangello, also known as "Nicky Glasses", "Nicky Cigars", "Nicky the Butler" and "Little Nicky", was the underboss of the Bonanno crime family under Philip Rastelli, the father-in-law of Robert Perrino and grandfather of Nicola Langora.