A crime family is a unit of an organized crime syndicate, particularly the Mafia (both in Sicily and in the United States), often operating within a specific geographic territory. In its strictest sense, a family (or clan) is a criminal gang, operating either on a unitary basis or as an organized collection of smaller gangs (e.g., cells, factions, crews, etc.). In turn, a family can be a sole "enterprise", or part of a larger syndicate or cartel.

The origins of the term come from the Sicilian Mafia. In the Sicilian language, the word cosca , which is the crown of spiny, closely folded leaves on plants such as the artichoke or the thistle, symbolizes the tightness of relationships between members. The word cosca is also used for clan . In the early days of the Mafia, loose groups of bandits organized themselves into associations that over time became more organized, and they adopted the term based on both of its meanings.

As the Mafia was imported into the United States in the late 19th century, the English translation of the word cosca was more at clan or family.

The term can be a point of confusion, especially in popular culture and Hollywood, because in the truest sense, crime families are not necessarily blood families who happen to be involved in criminal activity, and not necessarily based on blood relationships. In Sicily and America, most Mafia bosses are not related to their predecessors. [1] [2] Films like The Godfather and a spate of late-1980s "Mafia princess" television movies underscore this confusion.

It can further be speculated that the Mafia was simply emulating, to a certain degree, a more medieval order in which a noble family would more or less serve as the power in a local village, in a sort of inverted hacienda culture.

The Calabrian 'Ndrangheta is, however, purported to be organized along familial lines as 'ndrine .

Nevertheless, the term stuck, both in the minds of popular culture as well as the national law enforcement community, and eventually began to be used to describe individual units of not only Sicilian gangsters, but those whose origins lie in other parts of Italy (e.g., the aforementioned 'Ndrangheta, the Neapolitan Camorra , the Apulian Sacra Corona Unita , etc.). Indeed, the "family" mystique is to such a great degree that in the late 1990s, after many Camorra leaders were imprisoned during a large-scale crackdown in Naples, many of their wives, girlfriends, daughters, and even mothers took temporary control of their gangs, in a widespread phenomenon of Camorra "godmothers".

Sometimes the term is used to describe distinct units of crime syndicates of other ethnic and national origin, such as the Irish Mob, Japanese Yakuza , Chinese Tongs and Triads , Indian Mafia , Colombian and Mexican drug cartels , Chechen mafia, Russian mafia, Maltese mafia , the Thief in law and Eastern European families. Some of these entities, like the 'Ndrangheta, may also be organized along blood-family lines.

The 'Ndrangheta is a Mafia-type organized crime group based in Calabria, Italy. Despite not being as famous abroad as the Sicilian Mafia, and having been considered more rural than the Neapolitan Camorra and the Apulian Sacra Corona Unita, the 'Ndrangheta became the most powerful crime syndicate in Italy in the late 1990s and early 2000s. While commonly tied together with the Sicilian Mafia, the 'Ndrangheta operates independently from them, though there is contact between the two due to the geographical proximity and shared culture and language between Calabria and Sicily.

Sacra Corona Unita is a Mafia-type criminal organization from the Apulia region in Southern Italy, and is especially active in the areas of Brindisi, Lecce and Taranto.

A drug cartel is any criminal organization with the intention of supplying drug trafficking operations. They range from loosely managed agreements among various drug traffickers to formalized commercial enterprises. The term was applied when the largest trafficking organizations reached an agreement to coordinate the production and distribution of cocaine. Since that agreement was broken up, drug cartels are no longer actually cartels, but the term stuck and it is now popularly used to refer to any criminal narcotics related organization.

A mafia is a type of organized crime syndicate whose primary activities are protection racketeering, arbitrating disputes between criminals, and brokering and enforcing illegal agreements and transactions. Mafias often engage in secondary activities such as gambling, loan sharking, drug-trafficking, prostitution, and fraud.

The Sicilian Mafia, often known as simply the Mafia and referred to by its own members as Cosa Nostra, is an organized crime syndicate in Sicily, Italy. It is a loose association of criminal groups that share a common organisational structure and code of conduct. The basic group is known as a "family", "clan", or cosca. Each family claims sovereignty over a territory, usually a town or village or a neighbourhood (borgata) of a larger city, in which it operates its rackets. Its members call themselves "men of honour", although the public often refers to them as mafiosi. The Mafia's core activities are protection racketeering, the arbitration of disputes between criminals, and the organizing and oversight of illegal agreements and transactions. 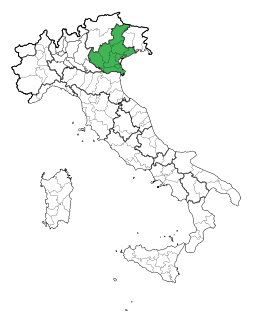 The Mala del Brenta, also known as Mafia veneta or Mafia del Piovese, is an organized crime group based in the Veneto and Friuli-Venezia Giulia, north-eastern Italy.

Organized crime in Italy and its criminal organizations have been prevalent in Italy, especially Southern Italy, for centuries and have affected the social and economic life of many Italian regions since at least the 19th century.

The Albanian mafia or Albanian organized crime are the general terms used for criminal organizations based in Albania or composed of ethnic Albanians. Albanian organized crime is active in Europe, North America, South America, and various other parts of the world including the Middle East and Asia. The Albanian Mafia participates in a diverse range of criminal enterprises including trafficking in drugs, arms, humans, and human organs. The Albanian criminal scenario is characterized by diversified criminal plans which, in their complexity, show one of the highest criminal capacities in the world. In Albania alone, there are over 15 mafia families that control organized crime. According to WikiLeaks reports, the Albanian mafia has monopolized various international affiliations from as far east as Israel, to as far west as South America. These reports primarily indicate a strong connection between politicians and various Albanian mafia families. According to the Research Institute for European and American Studies (RIEAS), Albanian mafia groups are hybrid organizations, often involved in both criminal and political activities.

A cosca, in Sicily, is a clan or Sicilian Mafia crime family led by a capo.

Giuseppe Morabito, nicknamed 'u tiradrittu, is an Italian criminal and a historical boss of the 'Ndrangheta, a Mafia-type organisation in the region of Calabria (Italy). He hails from Africo in the Locride. He was a fugitive from 1992 and included in the list of most wanted fugitives in Italy until his arrest in February 2004.

The 'ndrina is the basic unit of the 'Ndrangheta of Calabria, made up of blood relatives, and is the equivalent of the Sicilian Mafia’s "family" or cosca. The word derives from the Greek, meaning "a man who does not bend". Each 'ndrina is "autonomous on its territory and no formal authority stands above the 'ndrina boss." The 'ndrina is usually in control of a small town or a neighbourhood in larger cities, even outside Calabria, in cities and towns in the industrial North of Italy in and around Turin and Milan.

Around the world are countless groupings of individuals who deal exclusively or through a mix of legitimate and illegal activities. These Organized crime groups or criminal organizations are a transnational grouping of highly centralized enterprises run by criminals for the purpose of engaging in illegal activity, most commonly for the purpose of generating a monetary profit. The Omnibus Crime Control and Safe Streets Act of 1968 states, "Organized crime means the unlawful activities of members of a highly organized, disciplined association..." They are called a number of different names including: the Mafia, Yakuza (Japan), Chinese Triads, the Irish Mob, the Neapolitan Camorra, the Calabrian 'Ndrangheta, the Indian mafia, the Unione Corse, Serbian mafia, and the Bulgarian mafia.

Roberto Pannunzi, also known as Bebè (Baby), is an Italian criminal from Rome linked to the 'Ndrangheta, a Mafia-type organisation in Calabria. He is one of the top cocaine brokers for the Sicilian Mafia and the 'Ndrangheta with the Colombian cocaine cartels. He has been described as "Europe's most wanted drugs trafficker", and the "biggest cocaine trafficker in the world", the equivalent of Pablo Escobar, the head of the Colombian Medellín Cartel. According to the United States Drug Enforcement Administration (DEA), the drug trafficking activities of Pannunzi have been documented for over 30 years.

The Greek mafia is the colloquial term used to refer to various organized crime elements originating from Greece. Indigenous organized criminal groups are well-entrenched in the largest Greek urban centers, particularly in Athens. Organized crime has thrived in Greece in part thanks to the widespread political corruption in the country itself. The Greek mafia should not be confused with Greek street gangs, who take part in smaller street crime. Outside of the domestic Greek criminal organizations, the Sicilian Mafia, Camorra, and Albanian, Russian and Georgian mafia groups have been operating in Greece in collaboration with the domestic criminal syndicates.