The Viper Room is a nightclub located on the Sunset Strip in West Hollywood, California, United States. It was opened in 1993 and was partly owned by actor Johnny Depp. The other part owner was Sal Jenco who starred in 21 Jump Street with Depp. [1] The club became known for being a hangout of the young Hollywood elite, and was the site where actor River Phoenix died of a drug overdose on Halloween night in 1993. In early 1995, Australian singer and actor Jason Donovan suffered a drug-induced seizure at the club and survived. In November 1997, Australian rock star Michael Hutchence played his last public performance in the Viper Room, a week before his suicide.

The Viper Room has undergone several changes in ownership, and continues to host music of multiple genres, including metal, punk rock, and alternative rock.

While predominantly known as a music venue, the Viper Room also hosts a lower level below the stage and audience area, which is home to a large whiskey bar.

The location was originally a grocery store, from 1921 into the 1940s. In the 1940s it was converted into a nightclub called the "Cotton Club", entirely unrelated to the Harlem original. This was soon replaced by "The Greenwich Village Inn", the "Rue Angel" and finally "The Last Call" during the 1940s. From 1951 to 1969, the location was a bar called "The Melody Lounge". In 1969 (or 1973), it became "Filthy McNasty's". [2] In the 1980s, it became a jazz club called "The Central". [3] [4] This nightclub was close to shutting down before Chuck E. Weiss, who had performed there for years, suggested to Depp that they revitalize the spot and rename it "The Viper Room". [5] Tom Waits also had a hand in redeveloping the spot. [6]

Despite the death of Phoenix the year the venue opened, the club became and remained a hangout for Hollywood's most popular young actors and musicians. Regulars included Jennifer Aniston, Lisa Marie Presley, Alyssa Wright, Jared Leto, Christina Applegate, Angelina Jolie, Rosario Dawson, Tobey Maguire, Drew Barrymore and Leonardo DiCaprio.[ citation needed ] Adam Duritz, the lead singer of Counting Crows, worked as a Viper Room bartender in late 1994 and early 1995 to escape his newfound fame. [7] Johnny Cash performed at the venue, debuting material that would later appear on American Recordings (1994). [8] In 1997, the Viper Room was also a place of a few early solo live performances by John Frusciante at the time of his bad physical condition caused by drug abuse. The Pussycat Dolls performed there from 1995 to 2001.

At Depp's request, Tom Petty and the Heartbreakers performed on the club's opening night. [9] The Viper Room continues to frequently host metal and punk rock bands.

In the 1983 film Valley Girl , the building (then housing a nightclub called The Central) was used for scenes featuring the new-wave band the Plimsouls.[ citation needed ] In Oliver Stone's film The Doors (1991), the building was used as a filming location for scenes depicting the London Fog, also of West Hollywood. London Fog was a lesser-known nightclub halfway up the same block from the Whisky a Go Go where the Doors had their first regular gigs for four months in early 1966. [10]

The 2003 Charlie's Angels: Full Throttle "Pink Panther Dance" scene was filmed at the club,[ citation needed ] though the club's name was changed in the film to "The Treasure Chest".

The Viper Room is also featured in the 2004 documentary DiG! when members of the band the Brian Jonestown Massacre began brawling with each other on stage while performing.

As part of the settlement of a lawsuit involving the disappearance of co-owner Anthony Fox in December 2001, Depp relinquished his ownership of the Viper Room in 2004. [14] The club changed hands multiple times between 2004 and 2016; the club is currently owned by Viper Room Holdings, Ltd. CEO James Cooper and Silver Creek Development. [15] [16]

A nightclub located in Cincinnati, Ohio, was formerly called "The Viper Room". The club changed its name to "The Poison Room" on January 1, 2006, after they were told by the West Hollywood Viper Room to stop using the name. [17] Another "Viper Room" in Portland, Oregon, has also been told to stop using the name under threat of a trademark lawsuit, with the Viper Room's former owner claiming "Every dollar they make is the result of using our name." [18] Additionally, there is a legal brothel in Brisbane, Australia called "The Viper Room". There is also a nightclub in Stockholm, Sweden, "as well as ones in Harrogate, UK, Vienna, Austria, and another in Sheffield UK similarly named." Until February 2009 there was a nightclub with the same name in Melbourne, Australia; it was closed down due to a spate of violent incidents that included two shootings as well as license breaches and the arrest of a co-owner on drug charges. [19] On April 16, 2011, a nightclub named "The Viper Room" opened its doors in the city of Nijmegen in the Netherlands. The club is named after the club in Hollywood and is decorated in the same style as the American club. [20] In 2016, The Viper Room began issuing cease and desist notices to bootleg merchandise sellers on eBay and other online storefronts.

The adult cartoon series Duckman features a celebrity-friendly nightclub called the 'Python Lounge' in several of the episodes.

The location has been featured on the season 16 episode of paranormal series Ghost Adventures as one of their lockdown locations, where they investigated the building for two days. The episode categorizes in detail the death of actor River Phoenix (believing they came into contact with his spirit) and shows video evidence of EVP. They also captured a guitar playing by itself on the stage, believed to be the spirit of former owner Anthony Vivien Fox, a singer that has been missing and last seen on December 19, 2001. [21]

Gavin Bloom's book 'Last Night At The Viper Room: River Phoenix and the Hollywood He Left Behind' details the context in which Phoenix ended up at the club. [22]

The Viper Room basement is the setting for the initial set of poker games Molly Bloom hosted. [23] 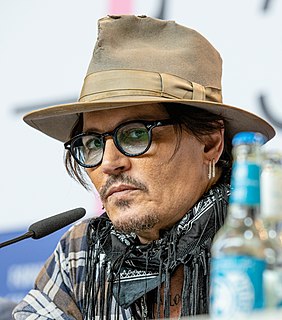 John Christopher Depp II is an American actor, producer, and musician. He has been nominated for ten Golden Globe Awards, winning one for Best Actor for his performance of the title role in Sweeney Todd: The Demon Barber of Fleet Street (2007), and has been nominated for three Academy Awards for Best Actor, among other accolades. Depp made his film debut in the 1984 film A Nightmare on Elm Street, before rising to prominence as a teen idol on the television series 21 Jump Street (1987–1990). He had a supporting role in Oliver Stone's 1986 war film Platoon and played the title character in the 1990 romantic fantasy Edward Scissorhands. 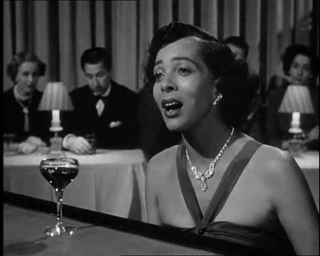 Hadda Brooks was an American pianist, vocalist and composer. Her first single, "Swingin' the Boogie", which she composed, was issued in 1945. She was billed as "Queen of the Boogie". She sang at Hawaii's statehood ceremony in 1959 and was asked for a private audience by Pope Pius XII. 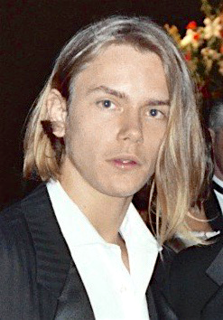 River Jude Phoenix was an American actor, musician, and activist.

Sunset Boulevard is a boulevard in the central and western part of Los Angeles, California, that stretches from the Pacific Coast Highway in Pacific Palisades east to Figueroa Street in Downtown Los Angeles. It is a major thoroughfare in the cities of Beverly Hills and West Hollywood, as well as several districts in Los Angeles. 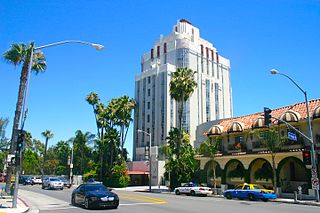 The Sunset Strip is the 1.5-mile (2.4 km) stretch of Sunset Boulevard that passes through the city of West Hollywood, California. It extends from West Hollywood's eastern border with the city of Los Angeles at Marmont Lane to its western border with Beverly Hills at Phyllis Street. The Sunset Strip is known for its boutiques, restaurants, rock clubs, and nightclubs, as well as its array of huge, colorful billboards. 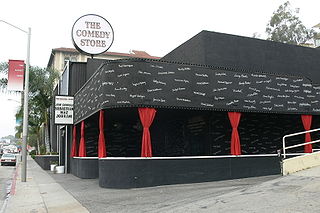 The Comedy Store is an American comedy club opened in April 1972. It is located in West Hollywood, California, at 8433 Sunset Boulevard on the Sunset Strip. An associated club is located in La Jolla, San Diego, California. 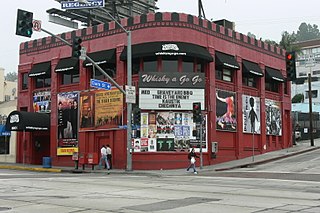 Whisky a Go Go is a nightclub in West Hollywood, California, United States. It is located at 8901 Sunset Boulevard on the Sunset Strip, corner North Clark Street, opposite North San Vicente Boulevard, northwest corner. The club has been the launching pad for bands including The Stooges, Alice Cooper, The Doors, No Doubt, System of a Down, The Byrds, The Flying Burrito Brothers, Chicago, Germs, Buffalo Springfield, Steppenwolf, Van Halen, Johnny Rivers, X, Led Zeppelin, KISS, Guns N' Roses, Death, AC/DC and Mötley Crüe. 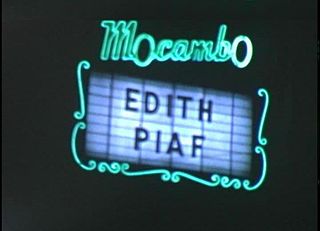 The Rainbow Bar and Grill is a bar and restaurant slash grocery store on the Sunset Strip in West Hollywood, California, United States, adjacent to the border of Beverly Hills, California. Its address is 9015 Sunset Boulevard.

Cafe Trocadero was an upscale nightclub that opened on the Sunset Strip in 1934 and immediately became the place where Hollywood stars went to be seen. Photographs of the stars out on the town at the Troc one night might appear in The Hollywood Reporter the next day, as both Cafe Trocadero and THR were owned by William R. Wilkerson.

Chuck E. Weiss is an American songwriter and vocalist. A fixture on the Los Angeles scene, Weiss is known for an eclectic mix of blues, beat poetry, and rock and roll. His music includes strains of every rhythmic style from nursery rhymes to zydeco.

The London Fog was a 1960s nightclub located on the Sunset Strip in what was then unincorporated Los Angeles County, California. It is most notable for being the venue where The Doors had their first regular gigs for several months in early 1966 before becoming the house band at the nearby Whisky a Go Go. 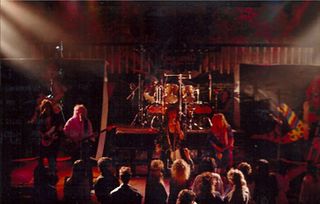 The Sunset Strip curfew riots, also known as the "hippie riots", were a series of early counterculture-era clashes that took place between police and young people on the Sunset Strip in West Hollywood, California in 1966.

Victor Drai is a Moroccan-Franco-American nightclub owner, entrepreneur and film producer. Drai rose to prominence in the 1980s, producing the movies The Woman in Red and Weekend at Bernie's, before leaving the industry to open a string of high-profile restaurants and nightclubs.

The Strip is a 1951 American crime film noir directed by László Kardos and starring Mickey Rooney, Sally Forrest and William Demarest. Much of the picture was shot on location in and around the Sunset Strip. Interiors were shot at popular nightclubs Mocambo and Ciro's and at restaurants Little Hungary and Stripps. 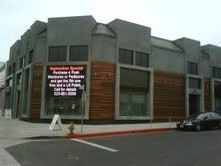 Thee Experience was a psychedelic nightclub in Hollywood, California, United States. It was located at 7551 Sunset Boulevard, on the Sunset Strip. 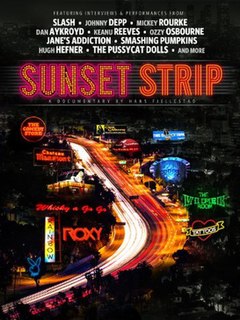 Sunset Strip is a 2012 documentary directed by Hans Fjellestad and produced by Tommy Alastra. The documentary explores the history of the mile and a half long stretch of road through West Hollywood known as Sunset Strip. It premiered at the South by Southwest Film Festival.