Last updated July 10, 2022
State of no net thermal energy flow between two connected systems
Not to be confused with Thermodynamic equilibrium.

The relation of thermal equilibrium is an instance of equilibrium between two bodies, which means that it refers to transfer through a selectively permeable partition of matter or work; it is called a diathermal connection. According to Lieb and Yngvason, the essential meaning of the relation of thermal equilibrium includes that it is reflexive and symmetric. It is not included in the essential meaning whether it is or is not transitive. After discussing the semantics of the definition, they postulate a substantial physical axiom, that they call the "zeroth law of thermodynamics", that thermal equilibrium is a transitive relation. They comment that the equivalence classes of systems so established are called isotherms. [1]

Heat can flow into or out of a closed system by way of thermal conduction or of thermal radiation to or from a thermal reservoir, and when this process is effecting net transfer of heat, the system is not in thermal equilibrium. While the transfer of energy as heat continues, the system's temperature can be changing.

Bodies prepared with separately uniform temperatures, then put into purely thermal communication with each other

If bodies are prepared with separately microscopically stationary states, and are then put into purely thermal connection with each other, by conductive or radiative pathways, they will be in thermal equilibrium with each other just when the connection is followed by no change in either body. But if initially they are not in a relation of thermal equilibrium, heat will flow from the hotter to the colder, by whatever pathway, conductive or radiative, is available, and this flow will continue until thermal equilibrium is reached and then they will have the same temperature.

One form of thermal equilibrium is radiative exchange equilibrium. [7] [8] Two bodies, each with its own uniform temperature, in solely radiative connection, no matter how far apart, or what partially obstructive, reflective, or refractive, obstacles lie in their path of radiative exchange, not moving relative to one another, will exchange thermal radiation, in net the hotter transferring energy to the cooler, and will exchange equal and opposite amounts just when they are at the same temperature. In this situation, Kirchhoff's law of equality of radiative emissivity and absorptivity and the Helmholtz reciprocity principle are in play.

Change of internal state of an isolated system

If an initially isolated physical system, without internal walls that establish adiabatically isolated subsystems, is left long enough, it will usually reach a state of thermal equilibrium in itself, in which its temperature will be uniform throughout, but not necessarily a state of thermodynamic equilibrium, if there is some structural barrier that can prevent some possible processes in the system from reaching equilibrium; glass is an example. Classical thermodynamics in general considers idealized systems that have reached internal equilibrium, and idealized transfers of matter and energy between them.

In a gravitational field

One may consider a system contained in a very tall adiabatically isolating vessel with rigid walls initially containing a thermally heterogeneous distribution of material, left for a long time under the influence of a steady gravitational field, along its tall dimension, due to an outside body such as the earth. It will settle to a state of uniform temperature throughout, though not of uniform pressure or density, and perhaps containing several phases. It is then in internal thermal equilibrium and even in thermodynamic equilibrium. This means that all local parts of the system are in mutual radiative exchange equilibrium. This means that the temperature of the system is spatially uniform. [8] This is so in all cases, including those of non-uniform external force fields. For an externally imposed gravitational field, this may be proved in macroscopic thermodynamic terms, by the calculus of variations, using the method of Langrangian multipliers. [9] [10] [11] [12] [13] [14] Considerations of kinetic theory or statistical mechanics also support this statement. [15] [16] [17] [18] [19] [20] [21]

Distinctions between thermal and thermodynamic equilibria

A planet is in thermal equilibrium when the incident energy reaching it (typically the solar irradiance from its parent star) is equal to the infrared energy radiated away to space.

Thermodynamics is a branch of physics that deals with heat, work, and temperature, and their relation to energy, entropy, and the physical properties of matter and radiation. The behavior of these quantities is governed by the four laws of thermodynamics which convey a quantitative description using measurable macroscopic physical quantities, but may be explained in terms of microscopic constituents by statistical mechanics. Thermodynamics applies to a wide variety of topics in science and engineering, especially physical chemistry, biochemistry, chemical engineering and mechanical engineering, but also in other complex fields such as meteorology.

Not all heat energy can be converted into work in a cyclic process.

The first law of thermodynamics is a version of the law of conservation of energy, adapted for thermodynamic processes, distinguishing three kinds of transfer of energy, as heat, as thermodynamic work, and as energy associated with matter transfer, and relating them to a function of a body's state, called internal energy. 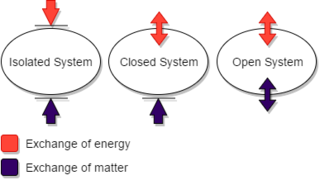 In thermodynamics, a quasi-static process, is a thermodynamic process that happens slowly enough for the system to remain in internal physical thermodynamic equilibrium. An example of this is quasi-static expansion of a mixture of hydrogen and oxygen gas, where the volume of the system changes so slowly that the pressure remains uniform throughout the system at each instant of time during the process. Such an idealized process is a succession of physical equilibrium states, characterized by infinite slowness.

In science, a process that is not reversible is called irreversible. This concept arises frequently in thermodynamics. All complex natural processes are irreversible, although a phase transition at the coexistence temperature is well approximated as reversible.

The laws of thermodynamics define a group of physical quantities, such as temperature, energy, and entropy, that characterize thermodynamic systems in thermodynamic equilibrium. The laws also use various parameters for thermodynamic processes, such as thermodynamic work and heat, and establish relationships between them. They state empirical facts that form a basis of precluding the possibility of certain phenomena, such as perpetual motion. In addition to their use in thermodynamics, they are important fundamental laws of physics in general, and are applicable in other natural sciences.

The Joule expansion is an irreversible process in thermodynamics in which a volume of gas is kept in one side of a thermally isolated container, with the other side of the container being evacuated. The partition between the two parts of the container is then opened, and the gas fills the whole container.

In physical science, an isolated system is either of the following:

In classical thermodynamics, entropy is a property of a thermodynamic system that expresses the direction or outcome of spontaneous changes in the system. The term was introduced by Rudolf Clausius in the mid-nineteenth century from the Greek word τρoπή (transformation) to explain the relationship of the internal energy that is available or unavailable for transformations in form of heat and work. Entropy predicts that certain processes are irreversible or impossible, despite not violating the conservation of energy. The definition of entropy is central to the establishment of the second law of thermodynamics, which states that the entropy of isolated systems cannot decrease with time, as they always tend to arrive at a state of thermodynamic equilibrium, where the entropy is highest. Entropy is therefore also considered to be a measure of disorder in the system.

In thermodynamics, entropy is a numerical quantity that shows that many physical processes can go in only one direction in time. For example, you can pour cream into coffee and mix it, but you cannot "unmix" it; you can burn a piece of wood, but you cannot "unburn" it. The word 'entropy' has entered popular usage to refer a lack of order or predictability, or of a gradual decline into disorder. A more physical interpretation of thermodynamic entropy refers to spread of energy or matter, or to extent and diversity of microscopic motion. 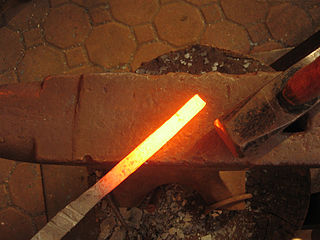 Temperature is a physical quantity that expresses hot and cold or a measure of the average kinetic energy of the atoms or molecules in the system. It is the manifestation of thermal energy, present in all matter, which is the source of the occurrence of heat, the flow of energy from a hotter body in contact with a colder body.