Last updated December 09, 2020
Not to be confused with Thirring–Wess model or Gross-Neveu model.

The Thirring model is an exactly solvable quantum field theory which describes the self-interactions of a Dirac field in (1+1) dimensions.

The Thirring model is given by the Lagrangian density

is the field, g is the coupling constant, m is the mass, and

, are the two-dimensional gamma matrices.

This is the unique model of (1+1)-dimensional, Dirac fermions with a local (self-)interaction. Indeed, since there are only 4 independent fields, because of the Pauli principle, all the quartic, local interactions are equivalent; and all higher power, local interactions vanish. (Interactions containing derivatives, such as

, are not considered because they are non-renormalizable.)

The correlation functions of the Thirring model (massive or massless) verify the Osterwalder-Schrader axioms, and hence the theory makes sense as a quantum field theory.

After it was introduced by Walter Thirring, [1] many authors tried to solve the massless case, with confusing outcomes. The correct formula for the two and four point correlation was finally found by K. Johnson; [2] then C. R. Hagen [3] and B. Klaiber [4] extended the explicit solution to any multipoint correlation function of the fields.

The mass spectrum of the model and the scattering matrix was explicitly evaluated by Bethe Ansatz. An explicit formula for the correlations is not known. J. I. Cirac, P. Maraner and J. K. Pachos applied the massive Thirring model to the description of optical lattices. [5]

In one space dimension and one time dimension the model can be solved by the Bethe Ansatz. This helps one calculate exactly the mass spectrum and scattering matrix. Calculation of the scattering matrix reproduces the results published earlier by Alexander Zamolodchikov. The paper with the exact solution of Massive Thirring model by Bethe Ansatz was first published in Russian. [6] Ultraviolet renormalization was done in the frame of the Bethe Ansatz. The fractional charge appears in the model during renormalization as a repulsion beyond the cutoff. 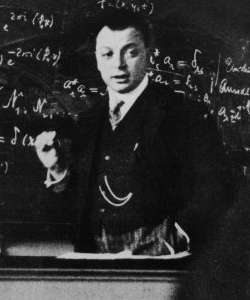 The Pauli exclusion principle is the quantum mechanical principle which states that two or more identical fermions cannot occupy the same quantum state within a quantum system simultaneously. This principle was formulated by Austrian physicist Wolfgang Pauli in 1925 for electrons, and later extended to all fermions with his spin–statistics theorem of 1940.

In physics, the Schwinger model, named after Julian Schwinger, is the model describing 2D Euclidean quantum electrodynamics with a Dirac fermion. This model exhibits a spontaneous symmetry breaking of the U(1) symmetry due to a chiral condensate due to a pool of instantons. The photon in this model becomes a massive particle at low temperatures. This model can be solved exactly and is used as a toy model for other more complex theories.

In particle physics, Yukawa's interaction or Yukawa coupling, named after Hideki Yukawa, is an interaction between a scalar field ϕ and a Dirac field ψ of the type

In theoretical physics, the Rarita–Schwinger equation is the relativistic field equation of spin-3/2 fermions. It is similar to the Dirac equation for spin-1/2 fermions. This equation was first introduced by William Rarita and Julian Schwinger in 1941.

The Gross–Neveu model is a quantum field theory model of Dirac fermions interacting via four fermion interactions in 1 spatial and 1 time dimension. It was introduced in 1974 by David Gross and André Neveu as a toy model for quantum chromodynamics, the theory of strong interactions.

In theoretical condensed matter physics and particle physics, bosonization is a mathematical procedure by which a system of interacting fermions in (1+1) dimensions can be transformed to a system of massless, non-interacting bosons. The method of bosonization was conceived independently by particle physicists Sidney Coleman and Stanley Mandelstam; and condensed matter physicists Daniel C. Mattis and Alan Luther in 1975.

The Bethe–Salpeter equation describes the bound states of a two-body (particles) quantum field theoretical system in a relativistically covariant formalism. The equation was actually first published in 1950 at the end of a paper by Yoichiro Nambu, but without derivation.

The Thirring–Wess model or Vector Meson model is an exactly solvable quantum field theory describing the interaction of a Dirac field with a vector field in dimension two.

In relativistic quantum mechanics and quantum field theory, the Bargmann–Wigner equations describe free particles of arbitrary spin j, an integer for bosons or half-integer for fermions. The solutions to the equations are wavefunctions, mathematically in the form of multi-component spinor fields.

The soler model is a quantum field theory model of Dirac fermions interacting via four fermion interactions in 3 spatial and 1 time dimension. It was introduced in 1938 by Dmitri Ivanenko and re-introduced and investigated in 1970 by Mario Soler as a toy model of self-interacting electron.