Quantum foam (also known as spacetime foam or spacetime bubble) is the quantum fluctuation of spacetime on very small scales due to quantum mechanics. Matter and antimatter is constantly created and destroyed. These subatomic objects are called virtual particles, also called quantum foam. [1] The idea was devised by John Wheeler in 1955. [2] [3]

With an incomplete theory of quantum gravity, it is impossible to be certain what spacetime would look like at small scales. However, there is no reason that spacetime needs to be fundamentally smooth. It is possible that instead, in a quantum theory of gravity, spacetime would consist of many small, ever-changing regions in which space and time are not definite, but fluctuate in a foam-like manner. [4]

Wheeler suggested that the uncertainty principle might imply that over sufficiently small distances and sufficiently brief intervals of time, the "very geometry of spacetime fluctuates". [5] These fluctuations could be large enough to cause significant departures from the smooth spacetime seen at macroscopic scales, giving spacetime a "foamy" character.

What Hendrik Casimir predicted and can be verified with the casimir experiment is strong evidence that virtual particles do exist. Another measurement supports the virtual particle idea, by predicting the strength of a magnet formed by an electron or muon. The g2 experiment targets this measurement. [1]

In 2009 the two MAGIC (Major Atmospheric Gamma-ray Imaging Cherenkov) telescopes detected that among gamma-ray photons arriving from the blazar Markarian 501, some photons at different energy levels arrived at different times, suggesting that some of the photons had moved more slowly and thus contradicting the theory of general relativity's notion of the speed of light being constant, a discrepancy which could be explained by the irregularity of quantum foam. [6] More recent experiments were, however, unable to confirm the supposed variation on the speed of light due to graininess of space. [7] [8]

The large fluctuations characteristic of a spacetime foam would be expected to occur on a length scale on the order of the Planck length. [12] A foamy spacetime would have limits on the accuracy with which distances can be measured because the size of the many quantum bubbles through which light travels will fluctuate. Depending on the spacetime model used, the spacetime uncertainties accumulate at different rates as light travels through the vast distances.

Observations of radiation from nearby quasars by Floyd Stecker of NASA's Goddard Space Flight Center have placed strong experimental limits on the possible violations of Einstein's special theory of relativity implied by the existence of quantum foam. [13] Thus experimental evidence so far has given a range of values in which scientists can test for quantum foam.

Chandra's X-ray detection of quasars at distances of billions of light years rules out the model where photons diffuse randomly through spacetime foam, similar to a light diffusing by passing through the fog.

Measurements of quasars at shorter, gamma-ray wavelengths with Fermi, and, shorter wavelengths with VERITAS rule out a second model, called a holographic model with less diffusion. [14] [15] [16] [17]

Relation to other theories

The vacuum fluctuations provide vacuum with a non-zero energy known as vacuum energy. [18] 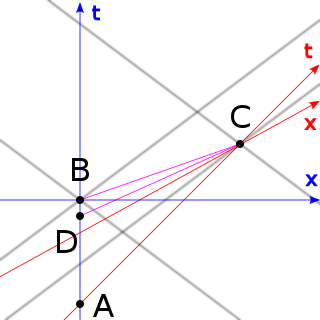 Faster-than-light communications and travel are the conjectural propagation of information or matter faster than the speed of light. 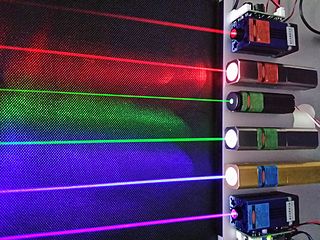 Zero-point energy (ZPE) is the lowest possible energy that a quantum mechanical system may have. Unlike in classical mechanics, quantum systems constantly fluctuate in their lowest energy state as described by the Heisenberg uncertainty principle. As well as atoms and molecules, the empty space of the vacuum has these properties. According to quantum field theory, the universe can be thought of not as isolated particles but continuous fluctuating fields: matter fields, whose quanta are fermions, and force fields, whose quanta are bosons. All these fields have zero-point energy. These fluctuating zero-point fields lead to a kind of reintroduction of an aether in physics, since some systems can detect the existence of this energy; however, this aether cannot be thought of as a physical medium if it is to be Lorentz invariant such that there is no contradiction with Einstein's theory of special relativity.

In quantum physics, a quantum fluctuation is the temporary random change in the amount of energy in a point in space, as prescribed by Werner Heisenberg's uncertainty principle. They are tiny random fluctuations in the values of the fields which represent elementary particles, such as electric and magnetic fields which represent the electromagnetic force carried by photons, W and Z fields which carry the weak force, and gluon fields which carry the strong force. Vacuum fluctuations appear as virtual particles, which are always created in particle-antiparticle pairs. Since they are created spontaneously without a source of energy, vacuum fluctuations and virtual particles are said to violate the conservation of energy. This is theoretically allowable because the particles annihilate each other within a time limit determined by the uncertainty principle so they are not directly observable. The uncertainty principle states the uncertainty in energy and time can be related by , where 1/2ħ ≈ 5,27286×10−35 Js. This means that pairs of virtual particles with energy and lifetime shorter than are continually created and annihilated in empty space. Although the particles are not directly detectable, the cumulative effects of these particles are measurable. For example, without quantum fluctuations the "bare" mass and charge of elementary particles would be infinite; from renormalization theory the shielding effect of the cloud of virtual particles is responsible for the finite mass and charge of elementary particles. Another consequence is the Casimir effect. One of the first observations which was evidence for vacuum fluctuations was the Lamb shift in hydrogen. In July 2020 scientists report that they, for the first time, measured that quantum vacuum fluctuations can influence the motion of macroscopic, human-scale objects by measuring correlations below the standard quantum limit between the position/momentum uncertainty of the mirrors of LIGO and the photon number/phase uncertainty of light that they reflect.

Doubly special relativity (DSR) – also called deformed special relativity or, by some, extra-special relativity – is a modified theory of special relativity in which there is not only an observer-independent maximum velocity, but also, an observer-independent maximum energy scale and/or a minimum length scale. This contrasts with other Lorentz-violating theories, such as the Standard-Model Extension, where Lorentz invariance is instead broken by the presence of a preferred frame. The main motivation for this theory is that the Planck energy should be the scale where as yet unknown quantum gravity effects become important and, due to invariance of physical laws, this scale should remain fixed in all inertial frames.

Cosmic strings are hypothetical 1-dimensional topological defects which may have formed during a symmetry-breaking phase transition in the early universe when the topology of the vacuum manifold associated to this symmetry breaking was not simply connected. It is expected that at least one string per Hubble volume is formed. Their existence was first contemplated by the theoretical physicist Tom Kibble in the 1970s.

The Fermi Gamma-ray Space Telescope (FGST), formerly called the Gamma-ray Large Area Space Telescope (GLAST), is a space observatory being used to perform gamma-ray astronomy observations from low Earth orbit. Its main instrument is the Large Area Telescope (LAT), with which astronomers mostly intend to perform an all-sky survey studying astrophysical and cosmological phenomena such as active galactic nuclei, pulsars, other high-energy sources and dark matter. Another instrument aboard Fermi, the Gamma-ray Burst Monitor, is being used to study gamma-ray bursts and solar flares.

Giovanni Amelino-Camelia is an Italian physicist of the University of Naples Federico II who works on quantum gravity. 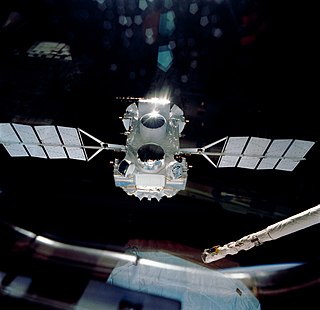 The Compton Gamma Ray Observatory (CGRO) was a space observatory detecting photons with energies from 20 keV to 30 GeV, in Earth orbit from 1991 to 2000. The observatory featured four main telescopes in one spacecraft, covering X-rays and gamma rays, including various specialized sub-instruments and detectors. Following 14 years of effort, the observatory was launched from Space Shuttle Atlantis during STS-37 on April 5, 1991, and operated until its deorbit on June 4, 2000. It was deployed in low Earth orbit at 450 km (280 mi) to avoid the Van Allen radiation belt. It was the heaviest astrophysical payload ever flown at that time at 17,000 kilograms (37,000 lb).

In physics, the Planck length, denoted ℓP, is a unit of length in the system of Planck units that was originally proposed by physicist Max Planck, equal to 1.616255(18)×10−35 m. The Planck length can be defined from three fundamental physical constants: the speed of light, the Planck constant, and the gravitational constant. It is also the reduced Compton wavelength of a particle with Planck mass. Regardless of whether it represents some fundamental limit to the universe, it is a useful unit in theoretical physics.

The following outline is provided as an overview of and topical guide to black holes:

Gamma-ray astronomy is the astronomical observation of gamma rays, the most energetic form of electromagnetic radiation, with photon energies above 100 keV. Radiation below 100 keV is classified as X-rays and is the subject of X-ray astronomy.

In mathematical physics, the concept of quantum spacetime is a generalization of the usual concept of spacetime in which some variables that ordinarily commute are assumed not to commute and form a different Lie algebra. The choice of that algebra still varies from theory to theory. As a result of this change some variables that are usually continuous may become discrete. Often only such discrete variables are called "quantized"; usage varies.