does not always equal

; or more generally an algebraic structure in which one of the principal binary operations is not commutative; one also allows additional structures, e.g. topology or norm, to be possibly carried by the noncommutative algebra of functions.

An approach giving deep insight about noncommutative spaces is through operator algebras (i.e. algebras of bounded linear operators on a Hilbert space). [1] Perhaps one of the typical examples of a noncommutative space is the "noncommutative tori", which played a key role in the early development of this field in 1980s and lead to noncommutative versions of vector bundles, connections, curvature, etc. [2]

The main motivation is to extend the commutative duality between spaces and functions to the noncommutative setting. In mathematics, spaces, which are geometric in nature, can be related to numerical functions on them. In general, such functions will form a commutative ring. For instance, one may take the ring C(X) of continuous complex-valued functions on a topological space X. In many cases (e.g., if X is a compact Hausdorff space), we can recover X from C(X), and therefore it makes some sense to say that X has commutative topology.

More specifically, in topology, compact Hausdorff topological spaces can be reconstructed from the Banach algebra of functions on the space (Gelfand–Naimark). In commutative algebraic geometry, algebraic schemes are locally prime spectra of commutative unital rings (A. Grothendieck), and every quasi-separated scheme

-modules (P. Gabriel–A. Rosenberg). For Grothendieck topologies, the cohomological properties of a site are invariants of the corresponding category of sheaves of sets viewed abstractly as a topos (A. Grothendieck). In all these cases, a space is reconstructed from the algebra of functions or its categorified version—some category of sheaves on that space.

Functions on a topological space can be multiplied and added pointwise hence they form a commutative algebra; in fact these operations are local in the topology of the base space, hence the functions form a sheaf of commutative rings over the base space.

Some applications in particle physics are described in the entries Noncommutative standard model and Noncommutative quantum field theory. The sudden rise in interest in noncommutative geometry in physics follows after the speculations of its role in M-theory made in 1997. [3]

Some of the theory developed by Alain Connes to handle noncommutative geometry at a technical level has roots in older attempts, in particular in ergodic theory. The proposal of George Mackey to create a virtual subgroup theory, with respect to which ergodic group actions would become homogeneous spaces of an extended kind, has by now been subsumed.

A smooth Riemannian manifold M is a topological space with a lot of extra structure. From its algebra of continuous functions C(M) we only recover M topologically. The algebraic invariant that recovers the Riemannian structure is a spectral triple. It is constructed from a smooth vector bundle E over M, e.g. the exterior algebra bundle. The Hilbert space L2(M, E) of square integrable sections of E carries a representation of C(M) by multiplication operators, and we consider an unbounded operator D in L2(M, E) with compact resolvent (e.g. the signature operator), such that the commutators [D, f] are bounded whenever f is smooth. A recent deep theorem [4] states that M as a Riemannian manifold can be recovered from this data.

This suggests that one might define a noncommutative Riemannian manifold as a spectral triple (A, H, D), consisting of a representation of a C*-algebra A on a Hilbert space H, together with an unbounded operator D on H, with compact resolvent, such that [D, a] is bounded for all a in some dense subalgebra of A. Research in spectral triples is very active, and many examples of noncommutative manifolds have been constructed.

There are also generalizations of the Cone and of the Proj of a commutative graded ring, mimicking a theorem of Serre on Proj. Namely the category of quasicoherent sheaves of O-modules on a Proj of a commutative graded algebra is equivalent to the category of graded modules over the ring localized on Serre's subcategory of graded modules of finite length; there is also analogous theorem for coherent sheaves when the algebra is Noetherian. This theorem is extended as a definition of noncommutative projective geometry by Michael Artin and J. J. Zhang, [5] who add also some general ring-theoretic conditions (e.g. Artin–Schelter regularity).

A. L. Rosenberg has created a rather general relative concept of noncommutative quasicompact scheme (over a base category), abstracting Grothendieck's study of morphisms of schemes and covers in terms of categories of quasicoherent sheaves and flat localization functors. [7] There is also another interesting approach via localization theory, due to Fred Van Oystaeyen, Luc Willaert and Alain Verschoren, where the main concept is that of a schematic algebra. [8] [9]

Some of the motivating questions of the theory are concerned with extending known topological invariants to formal duals of noncommutative (operator) algebras and other replacements and candidates for noncommutative spaces. One of the main starting points of Alain Connes' direction in noncommutative geometry is his discovery of a new homology theory associated to noncommutative associative algebras and noncommutative operator algebras, namely the cyclic homology and its relations to the algebraic K-theory (primarily via Connes–Chern character map).

The theory of characteristic classes of smooth manifolds has been extended to spectral triples, employing the tools of operator K-theory and cyclic cohomology. Several generalizations of now-classical index theorems allow for effective extraction of numerical invariants from spectral triples. The fundamental characteristic class in cyclic cohomology, the JLO cocycle, generalizes the classical Chern character.

In functional analysis, a branch of mathematics, an operator algebra is an algebra of continuous linear operators on a topological vector space, with the multiplication given by the composition of mappings.

In mathematics, sheaf cohomology is the application of homological algebra to analyze the global sections of a sheaf on a topological space. Broadly speaking, sheaf cohomology describes the obstructions to solving a geometric problem globally when it can be solved locally. The central work for the study of sheaf cohomology is Grothendieck's 1957 Tôhoku paper.

In mathematics, coherent duality is any of a number of generalisations of Serre duality, applying to coherent sheaves, in algebraic geometry and complex manifold theory, as well as some aspects of commutative algebra that are part of the 'local' theory.

In mathematics, the field with one element is a suggestive name for an object that should behave similarly to a finite field with a single element, if such a field could exist. This object is denoted F1, or, in a French–English pun, Fun. The name "field with one element" and the notation F1 are only suggestive, as there is no field with one element in classical abstract algebra. Instead, F1 refers to the idea that there should be a way to replace sets and operations, the traditional building blocks for abstract algebra, with other, more flexible objects. Many theories of F1 have been proposed, but it is not clear which, if any, of them give F1 all the desired properties. While there is still no field with a single element in these theories, there is a field-like object whose characteristic is one.

In noncommutative geometry and related branches of mathematics and mathematical physics, a spectral triple is a set of data which encodes a geometric phenomenon in an analytic way. The definition typically involves a Hilbert space, an algebra of operators on it and an unbounded self-adjoint operator, endowed with supplemental structures. It was conceived by Alain Connes who was motivated by the Atiyah-Singer index theorem and sought its extension to 'noncommutative' spaces. Some authors refer to this notion as unbounded K-cycles or as unbounded Fredholm modules. 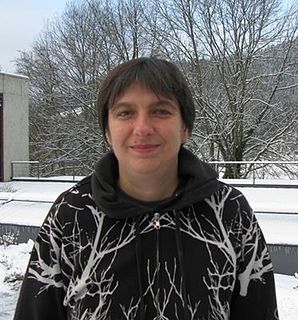 Matilde Marcolli is an Italian mathematical physicist. She has conducted research work in areas of mathematics and theoretical physics; obtained the Heinz Maier-Leibnitz-Preis of the Deutsche Forschungsgemeinschaft, and the Sofia Kovalevskaya Award of the Alexander von Humboldt Foundation. Marcolli has authored and edited numerous books in the field. She is currently a professor in the mathematics department of the University of Toronto and a member of the Perimeter Institute.

In mathematics, a Bost–Connes system is a quantum statistical dynamical system related to an algebraic number field, whose partition function is related to the Dedekind zeta function of the number field. Bost & Connes (1995) introduced Bost–Connes systems by constructing one for the rational numbers. Connes, Marcolli & Ramachandran (2005) extended the construction to imaginary quadratic fields.

Ali H. Chamseddine is a Lebanese physicist known for his contributions to particle physics, general relativity and mathematical physics. As of 2013, Chamseddine is a physics Professor at the American University of Beirut and the Institut des hautes études scientifiques.

Henri Moscovici is a Romanian-American mathematician, specializing in non-commutative geometry and global analysis.