In a phase space, every degree of freedom or parameter of the system is represented as an axis of a multidimensional space; a one-dimensional system is called a phase line, while a two-dimensional system is called a phase plane. For every possible state of the system or allowed combination of values of the system's parameters, a point is included in the multidimensional space. The system's evolving state over time traces a path (a phase space trajectory for the system) through the high-dimensional space. The phase space trajectory represents the set of states compatible with starting from one particular initial condition, located in the full phase space that represents the set of states compatible with starting from any initial condition. As a whole, the phase diagram represents all that the system can be, and its shape can easily elucidate qualities of the system that might not be obvious otherwise. A phase space may contain a great number of dimensions. For instance, a gas containing many molecules may require a separate dimension for each particle's x, y and z positions and momenta (6 dimensions for an idealized monatomic gas), and for more complex molecular systems additional dimensions are required to describe vibrational modes of the molecular bonds, as well as spin around 3 axes. Phase spaces are easier to use when analyzing the behavior of mechanical systems restricted to motion around and along various axes of rotation or translation - e.g. in robotics, like analyzing the range of motion of a robotic arm or determining the optimal path to achieve a particular position/momentum result.

The motion of an ensemble of systems in this space is studied by classical statistical mechanics. The local density of points in such systems obeys Liouville's theorem, and so can be taken as constant. Within the context of a model system in classical mechanics, the phase space coordinates of the system at any given time are composed of all of the system's dynamic variables. Because of this, it is possible to calculate the state of the system at any given time in the future or the past, through integration of Hamilton's or Lagrange's equations of motion.

For simple systems, there may be as few as one or two degrees of freedom. One degree of freedom occurs when one has an autonomous ordinary differential equation in a single variable,

with the resulting one-dimensional system being called a phase line, and the qualitative behaviour of the system being immediately visible from the phase line. The simplest non-trivial examples are the exponential growth model/decay (one unstable/stable equilibrium) and the logistic growth model (two equilibria, one stable, one unstable).

The phase space of a two-dimensional system is called a phase plane, which occurs in classical mechanics for a single particle moving in one dimension, and where the two variables are position and velocity. In this case, a sketch of the phase portrait may give qualitative information about the dynamics of the system, such as the limit cycle of the Van der Pol oscillator shown in the diagram.

Here, the horizontal axis gives the position and vertical axis the velocity. As the system evolves, its state follows one of the lines (trajectories) on the phase diagram.

Classic examples of phase diagrams from chaos theory are :

A plot of position and momentum variables as a function of time is sometimes called a phase plot or a phase diagram. However the latter expression, "phase diagram", is more usually reserved in the physical sciences for a diagram showing the various regions of stability of the thermodynamic phases of a chemical system, which consists of pressure, temperature, and composition.

In quantum mechanics, the coordinates p and q of phase space normally become Hermitian operators in a Hilbert space.

But they may alternatively retain their classical interpretation, provided functions of them compose in novel algebraic ways (through Groenewold's 1946 star product). This is consistent with the uncertainty principle of quantum mechanics. Every quantum mechanical observable corresponds to a unique function or distribution on phase space, and vice versa, as specified by Hermann Weyl (1927) and supplemented by John von Neumann (1931); Eugene Wigner (1932); and, in a grand synthesis, by H J Groenewold (1946). With J E Moyal (1949), these completed the foundations of the phase space formulation of quantum mechanics, a complete and logically autonomous reformulation of quantum mechanics. [2] (Its modern abstractions include deformation quantization and geometric quantization.)

Expectation values in phase-space quantization are obtained isomorphically to tracing operator observables with the density matrix in Hilbert space: they are obtained by phase-space integrals of observables, with the Wigner quasi-probability distribution effectively serving as a measure.

Classical expressions, observables, and operations (such as Poisson brackets) are modified by ħ-dependent quantum corrections, as the conventional commutative multiplication applying in classical mechanics is generalized to the noncommutative star-multiplication characterizing quantum mechanics and underlying its uncertainty principle.

In thermodynamics and statistical mechanics contexts, the term phase space has two meanings: for one, it is used in the same sense as in classical mechanics. If a thermodynamic system consists of N particles, then a point in the 6N-dimensional phase space describes the dynamic state of every particle in that system, as each particle is associated with three-position variables and three momentum variables. In this sense, as long as the particles are distinguishable, a point in phase space is said to be a microstate of the system. (For indistinguishable particles a microstate will consist of a set of N! points, corresponding to all possible exchanges of the N particles.) N is typically on the order of Avogadro's number, thus describing the system at a microscopic level is often impractical. This leads to the use of phase space in a different sense.

The phase space can also refer to the space that is parameterized by the macroscopic states of the system, such as pressure, temperature, etc. For instance, one may view the pressure-volume diagram or entropy-temperature diagrams as describing part of this phase space. A point in this phase space is correspondingly called a macrostate. There may easily be more than one microstate with the same macrostate. For example, for a fixed temperature, the system could have many dynamic configurations at the microscopic level. When used in this sense, a phase is a region of phase space where the system in question is in, for example, the liquid phase, or solid phase, etc.

Since there are many more microstates than macrostates, the phase space in the first sense is usually a manifold of much larger dimensions than in the second sense. Clearly, many more parameters are required to register every detail of the system down to the molecular or atomic scale than to simply specify, say, the temperature or the pressure of the system.

Phase space is extensively used in nonimaging optics, [3] the branch of optics devoted to illumination. It is also an important concept in Hamiltonian optics.

In classical statistical mechanics (continuous energies) the concept of phase space provides a classical analog to the partition function (sum over states) known as the phase integral. [4] Instead of summing the Boltzmann factor over discretely spaced energy states (defined by appropriate integer quantum numbers for each degree of freedom) one may integrate over continuous phase space. Such integration essentially consists of two parts: integration of the momentum component of all degrees of freedom (momentum space) and integration of the position component of all degrees of freedom (configuration space). Once the phase integral is known, it may be related to the classical partition function by multiplication of a normalization constant representing the number of quantum energy states per unit phase space. This normalization constant is simply the inverse of Planck's constant raised to a power equal to the number of degrees of freedom for the system. [5]

In physics, quantization is the process of transition from a classical understanding of physical phenomena to a newer understanding known as quantum mechanics. It is a procedure for constructing a quantum field theory starting from a classical field theory. This is a generalization of the procedure for building quantum mechanics from classical mechanics. Also related is field quantization, as in the "quantization of the electromagnetic field", referring to photons as field "quanta". This procedure is basic to theories of particle physics, nuclear physics, condensed matter physics, and quantum optics.

In physics, specifically statistical mechanics, an ensemble is an idealization consisting of a large number of virtual copies of a system, considered all at once, each of which represents a possible state that the real system might be in. In other words, a statistical ensemble is a probability distribution for the state of the system. The concept of an ensemble was introduced by J. Willard Gibbs in 1902.

In physics, an observable is a physical quantity that can be measured. Examples include position and momentum. In systems governed by classical mechanics, it is a real-valued "function" on the set of all possible system states. In quantum physics, it is an operator, or gauge, where the property of the quantum state can be determined by some sequence of operations. For example, these operations might involve submitting the system to various electromagnetic fields and eventually reading a value. 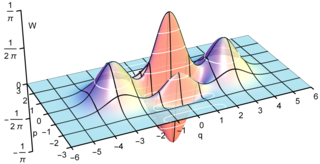 In statistical mechanics, a microstate is a specific microscopic configuration of a thermodynamic system that the system may occupy with a certain probability in the course of its thermal fluctuations. In contrast, the macrostate of a system refers to its macroscopic properties, such as its temperature, pressure, volume and density. Treatments on statistical mechanics define a macrostate as follows: a particular set of values of energy, the number of particles, and the volume of an isolated thermodynamic system is said to specify a particular macrostate of it. In this description, microstates appear as different possible ways the system can achieve a particular macrostate.

In quantum mechanics, the Wigner–Weyl transform or Weyl–Wigner transform is the invertible mapping between functions in the quantum phase space formulation and Hilbert space operators in the Schrödinger picture.

In statistical mechanics, Boltzmann's equation is a probability equation relating the entropy , also written as , of an ideal gas to the quantity , the number of real microstates corresponding to the gas's macrostate:

The phase-space formulation of quantum mechanics places the position and momentum variables on equal footing, in phase space. In contrast, the Schrödinger picture uses the position or momentum representations. The two key features of the phase-space formulation are that the quantum state is described by a quasiprobability distribution and operator multiplication is replaced by a star product.