In physics, an observable is a physical quantity that can be measured. Examples include position and momentum. In systems governed by classical mechanics, it is a real-valued "function" on the set of all possible system states. In quantum physics, it is an operator, or gauge, where the property of the quantum state can be determined by some sequence of operations. For example, these operations might involve submitting the system to various electromagnetic fields and eventually reading a value.

In quantum physics, observables manifest as linear operators on a Hilbert space representing the state space of quantum states. The eigenvalues of observables are real numbers that correspond to possible values the dynamical variable represented by the observable can be measured as having. That is, observables in quantum mechanics assign real numbers to outcomes of particular measurements, corresponding to the eigenvalue of the operator with respect to the system's measured quantum state. As a consequence, only certain measurements can determine the value of an observable for some state of a quantum system. In classical mechanics, any measurement can be made to determine the value of an observable.

The relation between the state of a quantum system and the value of an observable requires some linear algebra for its description. In the mathematical formulation of quantum mechanics, states are given by non-zero vectors in a Hilbert space V. Two vectors v and w are considered to specify the same state if and only if

In the case of transformation laws in quantum mechanics, the requisite automorphisms are unitary (or antiunitary) linear transformations of the Hilbert space V. Under Galilean relativity or special relativity, the mathematics of frames of reference is particularly simple, considerably restricting the set of physically meaningful observables.

In quantum mechanics, measurement of observables exhibits some seemingly unintuitive properties. Specifically, if a system is in a state described by a vector in a Hilbert space, the measurement process affects the state in a non-deterministic but statistically predictable way. In particular, after a measurement is applied, the state description by a single vector may be destroyed, being replaced by a statistical ensemble. The irreversible nature of measurement operations in quantum physics is sometimes referred to as the measurement problem and is described mathematically by quantum operations. By the structure of quantum operations, this description is mathematically equivalent to that offered by relative state interpretation where the original system is regarded as a subsystem of a larger system and the state of the original system is given by the partial trace of the state of the larger system.

that acts on the state of the quantum system. The eigenvalues of operator

correspond to the possible values that the dynamical variable can be observed as having. For example, suppose

is an eigenket (eigenvector) of the observable

, and exists in a d-dimensional Hilbert space. Then

This eigenket equation says that if a measurement of the observable

is made while the system of interest is in the state

, then the observed value of that particular measurement must return the eigenvalue

with certainty. However, if the system of interest is in the general state

is returned with probability

The above definition is somewhat dependent upon our convention of choosing real numbers to represent real physical quantities. Indeed, just because dynamical variables are "real" and not "unreal" in the metaphysical sense does not mean that they must correspond to real numbers in the mathematical sense.[ citation needed ]

To be more precise, the dynamical variable/observable is a self-adjoint operator in a Hilbert space.

Incompatibility of observables in quantum mechanics

A crucial difference between classical quantities and quantum mechanical observables is that the latter may not be simultaneously measurable, a property referred to as complementarity. This is mathematically expressed by non-commutativity of the corresponding operators, to the effect that the commutator

In quantum mechanics, a density matrix is a matrix that describes the quantum state of a physical system. It allows for the calculation of the probabilities of the outcomes of any measurement performed upon this system, using the Born rule. It is a generalization of the more usual state vectors or wavefuntions: while those can only represent pure states, density matrices can also represent mixed states. Mixed states arise in quantum mechanics in two different situations: first when the preparation of the system is not fully known, and thus one must deal with a statistical ensemble of possible preparations, and second when one wants to describe a part of an quantum entanglement, which cannot be described by pure states. 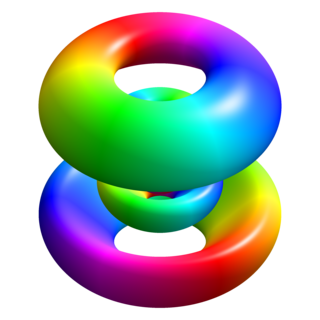 In quantum mechanics, a probability amplitude is a complex number used in describing the behaviour of systems. The modulus squared of this quantity represents a probability density. 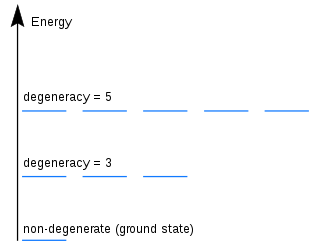 In quantum mechanics, an energy level is degenerate if it corresponds to two or more different measurable states of a quantum system. Conversely, two or more different states of a quantum mechanical system are said to be degenerate if they give the same value of energy upon measurement. The number of different states corresponding to a particular energy level is known as the degree of degeneracy of the level. It is represented mathematically by the Hamiltonian for the system having more than one linearly independent eigenstate with the same energy eigenvalue. When this is the case, energy alone is not enough to characterize what state the system is in, and other quantum numbers are needed to characterize the exact state when distinction is desired. In classical mechanics, this can be understood in terms of different possible trajectories corresponding to the same energy.

In mathematical physics, the Dirac–von Neumann axioms give a mathematical formulation of quantum mechanics in terms of operators on a Hilbert space. They were introduced by Paul Dirac in 1930 and John von Neumann in 1932.