In theoretical physics, quantum geometry is the set of mathematical concepts generalizing the concepts of geometry whose understanding is necessary to describe the physical phenomena at distance scales comparable to the Planck length. At these distances, quantum mechanics has a profound effect on physical phenomena.

Each theory of quantum gravity uses the term "quantum geometry" in a slightly different fashion. String theory, a leading candidate for a quantum theory of gravity, uses the term quantum geometry to describe exotic phenomena such as T-duality and other geometric dualities, mirror symmetry, topology-changing transitions[ clarification needed ], minimal possible distance scale, and other effects that challenge intuition. More technically, quantum geometry refers to the shape of a spacetime manifold as experienced by D-branes which includes quantum corrections to the metric tensor, such as the worldsheet instantons. For example, the quantum volume of a cycle is computed from the mass of a brane wrapped on this cycle. As another example, a distance between two quantum mechanical particles can be expressed in terms of the Łukaszyk–Karmowski metric. [1]

In an alternative approach to quantum gravity called loop quantum gravity (LQG), the phrase "quantum geometry" usually refers to the formalism within LQG where the observables that capture the information about the geometry are now well defined operators on a Hilbert space. In particular, certain physical observables, such as the area, have a discrete spectrum. It has also been shown that the loop quantum geometry is non-commutative. [2]

It is possible (but considered unlikely) that this strictly quantized understanding of geometry will be consistent with the quantum picture of geometry arising from string theory.

Another, quite successful, approach, which tries to reconstruct the geometry of space-time from "first principles" is Discrete Lorentzian quantum gravity.

where the position vector is

the differential volume element is

The overlap integral is given by:

in differential form this is

The probability of finding the particle in some region of space R is given by the integral over that region:

provided the wave function is normalized. When R is all of 3d position space, the integral must be 1 if the particle exists.

Differential forms are an approach for describing the geometry of curves and surfaces in a coordinate independent way. In quantum mechanics, idealized situations occur in rectangular Cartesian coordinates, such as the potential well, particle in a box, quantum harmonic oscillator, and more realistic approximations in spherical polar coordinates such as electrons in atoms and molecules. For generality, a formalism which can be used in any coordinate system is useful.

In quantum chemistry and molecular physics, the Born–Oppenheimer (BO) approximation is the best known mathematical approximation in molecular dynamics. Specifically, it is the assumption that the motion of atomic nuclei and electrons in a molecule can be treated separately, based on the fact that the nuclei are much heavier than the electrons. The approach is named after Max Born and J. Robert Oppenheimer who proposed it in 1927, in the early period of quantum mechanics.

In condensed matter physics, Bloch's theorem states that solutions to the Schrödinger equation in a periodic potential take the form of a plane wave modulated by a periodic function. These solutions, sometimes known as Bloch functions or Bloch states, are eigenstates in energy, and serve as a suitable basis for the wave functions of electrons in crystalline solids. Mathematically, they are written: 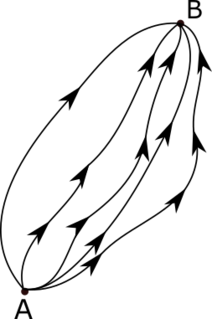 In physics, a free particle is a particle that, in some sense, is not bound by an external force, or equivalently not in a region where its potential energy varies. In classical physics, this means the particle is present in a "field-free" space. In quantum mechanics, it means a region of uniform potential, usually set to zero in the region of interest since potential can be arbitrarily set to zero at any point in space.

In a field of mathematics known as differential geometry, a Courant geometry was originally introduced by Zhang-Ju Liu, Alan Weinstein and Ping Xu in their investigation of doubles of Lie bialgebroids in 1997. Liu, Weinstein and Xu named it after Courant, who had implicitly devised earlier in 1990 the standard prototype of Courant algebroid through his discovery of a skew symmetric bracket on , called Courant bracket today, which fails to satisfy the Jacobi identity. Both this standard example and the double of a Lie bialgebra are special instances of Courant algebroids.