Last updated October 22, 2022
One of the five Nobel Prizes established in 1895 by Alfred Nobel
For a list of laureates, see List of Nobel laureates in Physics.
Award

The first Nobel Prize in Physics was awarded to German physicist Wilhelm Röntgen in recognition of the extraordinary services he rendered by the discovery of X-rays. This award is administered by the Nobel Foundation and is widely regarded as the most prestigious award that a scientist can receive in physics. It is presented in Stockholm at an annual ceremony on 10 December, the anniversary of Nobel's death. As of 2022 a total of 221 individuals have been awarded the prize. [2]

Alfred Nobel, in his last will and testament, stated that his wealth should be used to create a series of prizes for those who confer the "greatest benefit on mankind" in the fields of physics, chemistry, peace, physiology or medicine, and literature. [3] Though Nobel wrote several wills during his lifetime, the last one was written a year before he died and was signed at the Swedish-Norwegian Club in Paris on 27 November 1895. [4] [5] Nobel bequeathed 94% of his total assets, 31 million Swedish kronor (USD198 million, €176 million in 2016), to establish and endow the five Nobel Prizes. [6] Owing to the level of skepticism surrounding the will, it was not until 26 April 1897 that it was approved by the Storting (Norwegian Parliament). [7] [8] The executors of his will were Ragnar Sohlman and Rudolf Lilljequist, who formed the Nobel Foundation to take care of Nobel's fortune and organise the prizes.

The members of the Norwegian Nobel Committee who were to award the Peace Prize were appointed shortly after the will was approved. The other prize-awarding organisations followed: the Karolinska Institutet on 7 June, the Swedish Academy on 9 June, and the Royal Swedish Academy of Sciences on 11 June. [9] [10] The Nobel Foundation then established guidelines for awarding the prizes. In 1900, the Nobel Foundation's newly created statutes were promulgated by King Oscar II. [8] [11] According to Nobel's will, The Royal Swedish Academy of Sciences would award the Prize in Physics. [11]

The Nobel laureates are selected by the Nobel Committee for Physics, a Nobel Committee that consists of five members elected by The Royal Swedish Academy of Sciences. During the first stage that begins in September, a group of about 3,000 selected university professors, Nobel Laureates in Physics and Chemistry, and others are sent confidential nomination forms. The completed forms must arrive at the Nobel Committee by 31 January of the following year. The nominees are scrutinized and discussed by experts and are narrowed to approximately fifteen names. The committee submits a report with recommendations on the final candidates to the Academy, where, in the Physics Class, it is further discussed. The Academy then makes the final selection of the Laureates in Physics by a majority vote. [14]

The names of the nominees are never publicly announced, and neither are they told that they have been considered for the Prize. Nomination records are sealed for fifty years. [15] While posthumous nominations are not permitted, awards can be made if the individual died in the months between the decision of the committee (typically in October) and the ceremony in December. Prior to 1974, posthumous awards were permitted if the candidate had died after being nominated. [16]

The rules for the Nobel Prize in Physics require that the significance of achievements being recognized has been "tested by time". In practice, that means that the lag between the discovery and the award is typically on the order of 20 years and can be much longer. For example, half of the 1983 Nobel Prize in Physics was awarded to Subrahmanyan Chandrasekhar for his work on stellar structure and evolution that was done during the 1930s. As a downside of this tested-by-time rule, not all scientists live long enough for their work to be recognized. Some important scientific discoveries are never considered for a prize, as the discoverers die by the time the impact of their work is appreciated. [17] [18]

A Physics Nobel Prize laureate is awarded a gold medal, a diploma bearing a citation, and a sum of money. [19]

The Nobel Prize medals, minted by Myntverket [20] in Sweden and the Mint of Norway since 1902, are registered trademarks of the Nobel Foundation. Each medal has an image of Alfred Nobel in left profile on the obverse. The Nobel Prize medals for Physics, Chemistry, Physiology or Medicine, and Literature have identical obverses, showing the image of Alfred Nobel and the years of his birth and death (1833–1896). Nobel's portrait also appears on the obverse of the Nobel Peace Prize medal and the Medal for the Prize in Economics, but with a slightly different design. [21] [22] The image on the reverse of a medal varies according to the institution awarding the prize. The reverse sides of the Nobel Prize medals for Chemistry and Physics share the same design of the Goddess of Nature, whose veil is held up by the Genius of Science. These medals, along with those for Physiology/Medicine and Literature, were designed by Erik Lindberg in 1902. [23]

Nobel laureates receive a diploma directly from the hands of the King of Sweden. Each diploma is uniquely designed by the prize-awarding institutions for the laureate who receives it. [24] The diploma contains a picture with the name of the laureate and normally a citation explaining their accomplishments. [24]

At the awards ceremony, the laureate is given a document indicating the award sum. The amount of the cash award may differ from year to year, based on the funding available from the Nobel Foundation. For example, in 2009 the total cash awarded was 10 million SEK (US$1.4 million), [25] but in 2012 following the Great Recession, the amount was 8 million Swedish Kronor, or US$1.1 million. [26] If there are two laureates in a particular category, the award grant is divided equally between the recipients, but if there are three, the awarding committee may opt to divide the grant equally, or award half to one recipient and a quarter to each of the two others. [27] [28] [29] [30]

The committee and institution serving as the selection board for the prize typically announce the names of the laureates during the first week of October. The prize is then awarded at formal ceremonies held annually in Stockholm Concert Hall on 10 December, the anniversary of Nobel's death. The laureates receive a diploma, a medal and a document confirming the prize amount. [31]

The Nobel Prizes are five separate prizes that, according to Alfred Nobel's will of 1895, are awarded to "those who, during the preceding year, have conferred the greatest benefit to humankind." Alfred Nobel was a Swedish chemist, engineer, and industrialist most famously known for the invention of dynamite. He died in 1896. In his will, he bequeathed all of his "remaining realisable assets" to be used to establish five prizes which became known as "Nobel Prizes." Nobel Prizes were first awarded in 1901.

The Nobel Foundation is a private institution founded on 29 June 1900 to manage the finances and administration of the Nobel Prizes. The foundation is based on the last will of Alfred Nobel, the inventor of dynamite. 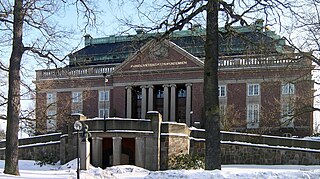 The Nobel Prize in Literature is a Swedish literature prize that is awarded annually, since 1901, to an author from any country who has, in the words of the will of Swedish industrialist Alfred Nobel, "in the field of literature, produced the most outstanding work in an idealistic direction". Though individual works are sometimes cited as being particularly noteworthy, the award is based on an author's body of work as a whole. The Swedish Academy decides who, if anyone, will receive the prize. The academy announces the name of the laureate in early October. It is one of the five Nobel Prizes established by the will of Alfred Nobel in 1895. Literature is traditionally the final award presented at the Nobel Prize ceremony. On some occasions the award has been postponed to the following year, most recently in 2018 as of May 2022.

Listen to this article (30 minutes)

This audio file was created from a revision of this article dated 16 February 2016 (2016-02-16), and does not reflect subsequent edits.
(Audio help  · More spoken articles)