Geoffrey Everest Hinton CC FRS FRSC [11] (born 6 December 1947) is an English Canadian cognitive psychologist and computer scientist, most noted for his work on artificial neural networks. Since 2013 he divides his time working for Google (Google Brain) and the University of Toronto. In 2017, he cofounded and became the Chief Scientific Advisor of the Vector Institute in Toronto. [12] [13]

With David Rumelhart and Ronald J. Williams, Hinton was co-author of a highly cited paper published in 1986 that popularized the backpropagation algorithm for training multi-layer neural networks, [14] although they were not the first to propose the approach. [15] Hinton is viewed by some as a leading figure in the deep learning community and is referred to by some as the "Godfather of Deep Learning". [16] [17] [18] [19] [20] The dramatic image-recognition milestone of the AlexNet designed by his student Alex Krizhevsky [21] for the ImageNet challenge 2012 [22] helped to revolutionize the field of computer vision. [23] Hinton was awarded the 2018 Turing Award alongside Yoshua Bengio and Yann LeCun for their work on deep learning. [24]

Hinton was educated at King's College, Cambridge, graduating in 1970 with a Bachelor of Arts in experimental psychology. [1] He continued his study at the University of Edinburgh where he was awarded a PhD in artificial intelligence in 1978 for research supervised by Christopher Longuet-Higgins. [3] [26]

After his PhD he worked at the University of Sussex, and (after difficulty finding funding in Britain) [27] the University of California, San Diego, and Carnegie Mellon University. [1] He was the founding director of the Gatsby Charitable Foundation Computational Neuroscience Unit at University College London, [1] and is currently [update] [28] a professor in the computer science department at the University of Toronto. He holds a Canada Research Chair in Machine Learning, and is currently an advisor for the Learning in Machines & Brains program at the Canadian Institute for Advanced Research. Hinton taught a free online course on Neural Networks on the education platform Coursera in 2012. [29] Hinton joined Google in March 2013 when his company, DNNresearch Inc., was acquired. He is planning to "divide his time between his university research and his work at Google". [30]

While Hinton was a professor at Carnegie Mellon University (1982–1987), David E. Rumelhart and Hinton and Ronald J. Williams applied the backpropagation algorithm to multi-layer neural networks. Their experiments showed that such networks can learn useful internal representations of data. [14] In an interview of 2018, [32] Hinton said that "David E. Rumelhart came up with the basic idea of backpropagation, so it's his invention." Although this work was important in popularizing backpropagation, it was not the first to suggest the approach. [15] Reverse-mode automatic differentiation, of which backpropagation is a special case, was proposed by Seppo Linnainmaa in 1970, and Paul Werbos proposed to use it to train neural networks in 1974. [15]

During the same period, Hinton co-invented Boltzmann machines with David Ackley and Terry Sejnowski. [33] His other contributions to neural network research include distributed representations, time delay neural network, mixtures of experts, Helmholtz machines and Product of Experts. In 2007 Hinton coauthored an unsupervised learning paper titled Unsupervised learning of image transformations. [34] An accessible introduction to Geoffrey Hinton's research can be found in his articles in Scientific American in September 1992 and October 1993. [35]

In October and November 2017 respectively, Hinton published two open access research papers [36] [37] on the theme of capsule neural networks, which according to Hinton are "finally something that works well." [38]

Geoffrey E. Hinton is internationally distinguished for his work on artificial neural nets, especially how they can be designed to learn without the aid of a human teacher. This may well be the start of autonomous intelligent brain-like machines. He has compared effects of brain damage with effects of losses in such a net, and found striking similarities with human impairment, such as for recognition of names and losses of categorization. His work includes studies of mental imagery, and inventing puzzles for testing originality and creative intelligence. It is conceptual, mathematically sophisticated and experimental. He brings these skills together with striking effect to produce important work of great interest. [41]

In 2016, he was elected a foreign member of National Academy of Engineering "For contributions to the theory and practice of artificial neural networks and their application to speech recognition and computer vision". [44] He also received the 2016 IEEE/RSE Wolfson James Clerk Maxwell Award. [45]

He has won the BBVA Foundation Frontiers of Knowledge Award (2016) in the Information and Communication Technologies category "for his pioneering and highly influential work" to endow machines with the ability to learn.[ citation needed ]

Together with Yann LeCun, and Yoshua Bengio, Hinton won the 2018 Turing Award for conceptual and engineering breakthroughs that have made deep neural networks a critical component of computing. [46] [47] [48]

Hinton is the great-great-grandson both of logician George Boole whose work eventually became one of the foundations of modern computer science, and of surgeon and author James Hinton. [50] who was the father of Charles Howard Hinton. Hinton's father was Howard Hinton. [1] [51] His middle name is from another relative, George Everest. [27] He is the nephew of the economist Colin Clark. [52] He lost his first wife to ovarian cancer in 1994. [53]

Hinton moved from the U.S. to Canada in part due to disillusionment with Ronald Reagan-era politics and disapproval of military funding of artificial intelligence. [27]

Hinton has petitioned against lethal autonomous weapons. Regarding existential risk from artificial intelligence, Hinton typically declines to make predictions more than five years into the future, noting that exponential progress makes the uncertainty too great. [54] However, in an informal conversation with the AI risk researcher Nick Bostrom in November 2015, overheard by journalist Raffi Khatchadourian, [55] he is reported to have stated that he did not expect general A.I. to be achieved for decades (“No sooner than 2070”), and that, in the context of a dichotomy earlier introduced by Bostrom between people who think managing existential risk from artificial intelligence is probably hopeless versus easy enough that it will be solved automatically, Hinton "[is] in the camp that is hopeless.” [55] He has stated, “I think political systems will use it to terrorize people” and has expressed his belief that agencies like the National Security Agency (NSA) are already attempting to abuse similar technology. [55]

Asked by Nick Bostrom why he continues research despite his grave concerns, Hinton stated, "I could give you the usual arguments. But the truth is that the prospect of discovery is too sweet." [55]

Jürgen Schmidhuber is a computer scientist most noted for his work in the field of artificial intelligence, deep learning and artificial neural networks. He is a co-director of the Dalle Molle Institute for Artificial Intelligence Research in Manno, in the district of Lugano, in Ticino in southern Switzerland. He is sometimes called the "father of (modern) AI" or, one time, the "father of deep learning."

David Everett Rumelhart was an American psychologist who made many contributions to the formal analysis of human cognition, working primarily within the frameworks of mathematical psychology, symbolic artificial intelligence, and parallel distributed processing. He also admired formal linguistic approaches to cognition, and explored the possibility of formulating a formal grammar to capture the structure of stories.

The neocognitron is a hierarchical, multilayered artificial neural network proposed by Kunihiko Fukushima in 1979. It has been used for handwritten character recognition and other pattern recognition tasks, and served as the inspiration for convolutional neural networks.

CIFAR is a charitable organization based in Canada that brings together teams of top researchers from around the world to address important and complex questions. It was founded in 1982 and is supported by individuals, foundations and corporations, as well as funding from the Government of Canada and the provinces of Quebec, British Columbia and Alberta.

Léon Bottou is a researcher best known for his work in machine learning and data compression. His work presents stochastic gradient descent as a fundamental learning algorithm. He is also one of the main creators of the DjVu image compression technology, and the maintainer of DjVuLibre, the open source implementation of DjVu. He is the original developer of the Lush programming language.

Yann André LeCun is a French-American computer scientist working primarily in the fields of machine learning, computer vision, mobile robotics, and computational neuroscience. He is the Silver Professor of the Courant Institute of Mathematical Sciences at New York University, and Vice President, Chief AI Scientist at Facebook.

Kunihiko Fukushima is a Japanese computer scientist, most noted for his work on artificial neural networks and deep learning. He is currently working part-time as a Senior Research Scientist at the Fuzzy Logic Systems Institute in Tokyo.

Deep learning is part of a broader family of machine learning methods based on artificial neural networks with representation learning. Learning can be supervised, semi-supervised or unsupervised.

Yoshua Bengio is a Canadian computer scientist, most noted for his work on artificial neural networks and deep learning. He was a co-recipient of the 2018 ACM A.M. Turing Award for his work in deep learning. He is a professor at the Department of Computer Science and Operations Research at the Université de Montréal and scientific director of the Montreal Institute for Learning Algorithms (MILA).

Alex Graves is a research scientist at DeepMind. He did a BSc in Theoretical Physics at Edinburgh and obtained a PhD in AI under Jürgen Schmidhuber at IDSIA. He was also a postdoc at TU Munich and under Geoffrey Hinton at the University of Toronto.

This page is a timeline of machine learning. Major discoveries, achievements, milestones and other major events are included. 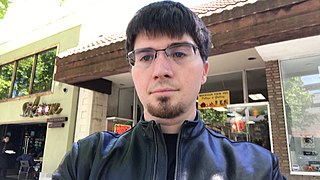 Wojciech Zaremba is a co-founder of OpenAI (2016-now), where he leads the robotics team. His team is working on developing general purpose robots via new approaches to transfer learning and teaching robots complex behaviors. The mission of OpenAI is to build safe artificial intelligence (AI), and ensure that its benefits are as evenly distributed as possible.

AlexNet is the name of a convolutional neural network (CNN), designed by Alex Krizhevsky, and published with Ilya Sutskever and Krizhevsky's doctoral advisor Geoffrey Hinton.

The history of artificial neural networks (ANN) began with Warren McCulloch and Walter Pitts (1943) who created a computational model for neural networks based on algorithms called threshold logic. This model paved the way for research to split into two approaches. One approach focused on biological processes while the other focused on the application of neural networks to artificial intelligence. This work led to work on nerve networks and their link to finite automata.