Scopus is Elsevier's abstract and citation database launched in 2004. Scopus covers nearly 36,377 titles (22,794 active titles and 13,583 inactive titles) from approximately 11,678 publishers, of which 34,346 are peer-reviewed journals in top-level subject fields: life sciences, social sciences, physical sciences and health sciences. It covers three types of sources: book series, journals, and trade journals. All journals covered in the Scopus database are reviewed for sufficiently high quality each year according to four types of numerical quality measure for each title; those are h-Index, CiteScore, SJR (SCImago Journal Rank) and SNIP (Source Normalized Impact per Paper). Searches in Scopus also incorporate searches of patent database Lexis-Nexis, albeit with a limited functionaly. [1]

Comparing ease of use and coverage of Scopus and the Web of Science (WOS), a 2006 study concluded that "Scopus is easy to navigate, even for the novice user. ... The ability to search both forward and backward from a particular citation would be very helpful to the researcher. The multidisciplinary aspect allows the researcher to easily search outside of his discipline" and "One advantage of WOS over Scopus is the depth of coverage, with the full WOS database going back to 1945 and Scopus going back to 1966. However, Scopus and WOS complement each other as neither resource is all-inclusive." [2]

Scopus also offers author profiles which cover affiliations, number of publications and their bibliographic data, references, and details on the number of citations each published document has received. It has alerting features that allow registered users to track changes to a profile and a facility to calculate authors' h-index. In 2016, a gratis website, Scopus CiteScore, [3] was introduced. It provides citation data for all 25,000+ active titles such as journals, conference proceedings and books in Scopus and provides an alternative to the impact factor, a journal-level indicator which may correlate negatively with reliability. [4]

Scopus IDs for individual authors can be integrated with the non-proprietary digital identifier ORCID. [5]

Since Elsevier is the owner of Scopus and is also one of the main international publishers of scientific journals, an independent and international Scopus Content Selection and Advisory Board (CSAB) was established in 2009 to prevent a potential conflict of interest in the choice of journals to be included in the database and to maintain an open and transparent content coverage policy, regardless of publisher. [7] The board consists of scientists and subject librarians. Nevertheless, critique over a perceived conflict of interest has continued. [8]

CSAB team is responsible for inclusion and exclusion of different titles on Scopus. Since 2004, they have included 41525 and excluded 688 titles [9] The re-evaluation policy is claimed to be based on four criteria of Publication Concern, Under Performance, Outlier Performance and Continuous curation. Since 2016, the CSAB has re-evaluated 990 titles published by 539 different publishers leading to 536 titles discontinued for indexing. [10] Nevertheless, research continues to show the inclusion of predatory journals. [11] [12]

This section is an excerpt from CiteScore.[ edit ]
CiteScore (CS) of an academic journal is a measure reflecting the yearly average number of citations to recent articles published in that journal. This journal evaluation metric was launched in December 2016 by Elsevier as an alternative to the generally used JCR impact factors (calculated by Clarivate). CiteScore is based on the citations recorded in the Scopus database rather than in JCR, and those citations are collected for articles published in the preceding four years instead of two or five.

A citation index is a kind of bibliographic index, an index of citations between publications, allowing the user to easily establish which later documents cite which earlier documents. A form of citation index is first found in 12th-century Hebrew religious literature. Legal citation indexes are found in the 18th century and were made popular by citators such as Shepard's Citations (1873). In 1961, Eugene Garfield's Institute for Scientific Information (ISI) introduced the first citation index for papers published in academic journals, first the Science Citation Index (SCI), and later the Social Sciences Citation Index (SSCI) and the Arts and Humanities Citation Index (AHCI). American Chemical Society converted its printed Chemical Abstract Service into internet-accessible SciFinder in 2008. The first automated citation indexing was done by CiteSeer in 1997 and was patented. Other sources for such data include Google Scholar, Microsoft Academic, Elsevier's Scopus, and the National Institutes of Health's iCite.

The impact factor (IF) or journal impact factor (JIF) of an academic journal is a scientometric index calculated by Clarivate that reflects the yearly mean number of citations of articles published in the last two years in a given journal, as indexed by Clarivate's Web of Science. As a journal-level metric, it is frequently used as a proxy for the relative importance of a journal within its field; journals with higher impact factor values are given the status of being more important, or carry more prestige in their respective fields, than those with lower values. While frequently used by universities and funding bodies to decide on promotion and research proposals, it has come under attack for distorting good scientific practices. 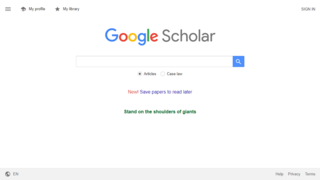 Google Scholar is a freely accessible web search engine that indexes the full text or metadata of scholarly literature across an array of publishing formats and disciplines. Released in beta in November 2004, the Google Scholar index includes peer-reviewed online academic journals and books, conference papers, theses and dissertations, preprints, abstracts, technical reports, and other scholarly literature, including court opinions and patents.

College Teaching is a quarterly cross-disciplinary academic journal focused on the subject of teaching in higher education and the Scholarship of Teaching and Learning, with special focus on improving student learning. The journal website states that it "provides an interdisciplinary academic forum on issues in teaching and learning at the undergraduate or graduate level." The journal employs double-blind peer review.

The Web of Science is a paid-access platform that provides access to multiple databases that provide reference and citation data from academic journals, conference proceedings, and other documents in various academic disciplines. It was originally produced by the Institute for Scientific Information. It is currently owned by Clarivate.

Acta Biotheoretica: Mathematical and philosophical foundations of biological and biomedical science is a quarterly peer-reviewed scientific journal published by Springer Science+Business Media. It is the official journal of the Jan van der Hoeven Society for Theoretical Biology. The editor-in-chief is F.J.A. Jacobs.

Hepatitis Monthly is a monthly peer-reviewed open access medical journal published by Kowsar Publishing, a publisher included on Beall's List prior to its shutdown in 2017. It was established in 2002 by Seyed-Moayed Alavian, who is the journal's editor-in-chief.

ResearcherID is an identifying system for scientific authors. The system was introduced in January 2008 by Thomson Reuters Corporation. 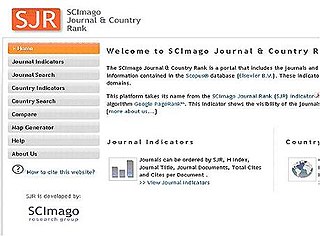 Acta Astronomica is a quarterly peer-reviewed scientific journal covering astronomy and astrophysics. It was established in 1925 by the Polish astronomer Tadeusz Banachiewicz.

Applied Physics Express or APEX is a scientific journal publishing letters, with usually no more than three pages per (concise) article. The main purpose is to rapidly publish original, timely, and novel research papers in applied physics. As part of its aim, the journal intends for papers to be novel research that has a strong impact on relevant fields and society. It is notable that the journal considers satisfaction of this criterion as showing the paper merits priority handling in the review and publication processes. In keeping with this aim, its issues are published online on a weekly basis. The print version is published monthly.

Social Compass is a peer-reviewed academic journal that covers research in the field of sociology of religion. The journal's co-directors are Olivier Servais and Frédéric Laugrand. The current Editor is Carolina Sappia and the journal is published by SAGE Publications.

Predatory publishing, also write-only publishing or deceptive publishing, is an exploitative academic publishing business model that involves charging publication fees to authors without checking articles for quality and legitimacy, and without providing editorial and publishing services that legitimate academic journals provide, whether open access or not. The phenomenon of "open access predatory publishers" was first noticed by Jeffrey Beall, when he described "publishers that are ready to publish any article for payment". However, criticisms about the label "predatory" have been raised. A lengthy review of the controversy started by Beall appears in The Journal of Academic Librarianship.

OurResearch, formerly known as ImpactStory, is a nonprofit organization which creates and distributes tools and services for libraries, institutions and researchers. The organization follows open practices with their data, code, and governance. OurResearch is funded by the Alfred P. Sloan Foundation, the National Science Foundation, and Arcadia Fund. 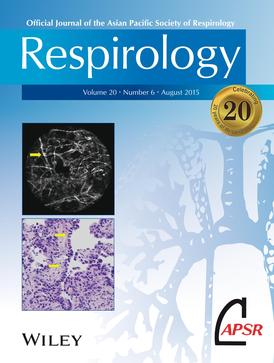 Respirology is a peer-reviewed medical journal published by Wiley on behalf of the Asian Pacific Society of Respirology. The word respirology is derived from the Latin root respirare, "to breathe" and the Greek root logos, "knowledge". The journal covers clinical respiratory biology and disease, including epidemiology, intensive and critical care medicine, pathology, physiology, thoracic surgery, and general medicine, as it relates to respiratory biology and disease. 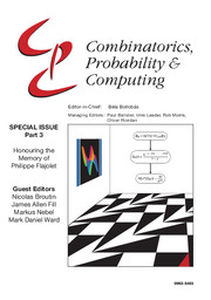 Combinatorics, Probability and Computing is a peer-reviewed scientific journal in mathematics published by Cambridge University Press. Its editor-in-chief is Béla Bollobás.

Aging is a bimonthly peer-reviewed open access bio-medical journal covering research on all aspects of gerontology. The journal was established in 2009 and is published by Impact Journals. The editors-in-chief are Jan Vijg, David Andrew Sinclair, Vera Gorbunova, Judith Campisi, Mikhail V. Blagosklonny.

The International Journal of Health Services is a quarterly peer-reviewed academic journal covering health policy. It was established in 1971 and is published by SAGE Publications. The current editors-in-chief are Carles Muntaner and Joan Benach.

Probability and Mathematical Statistics is a peer-reviewed scientific journal covering mathematical aspects of the probability theory. It was founded in 1980 as the initiative of the Wrocław probability community led by Kazimierz Urbanik and Czesław Ryll-Nardzewski, and statistics community represented by Witold Klonecki. They served as editors of the journal during the first twenty-five years of its existence, with Kazimierz Urbanik shouldering the role of the editor-in-chief. Beginning with 2007, Probability and Mathematical Statistics became an affiliated journal of the Institute of Mathematical Statistics. PMS is indexed by Scopus, MathSciNet, Index Copernicus and Journal Citation Reports (IF=0.617). PMS is an open-access journal.