Last updated June 28, 2021
Series of journals that publish review articles in a range of areas of biology and chemistry
Academic journal

Trends is a series of review journals in a range of areas of biology and chemistry published by Elsevier under its Cell Press imprint.

Immunology Today, Parasitology Today, and Molecular Medicine Today changed their names to Trends in... in 2001. Drug Discovery Today was spun off as an independent brand.

The current set of Trends journals are all published monthly: 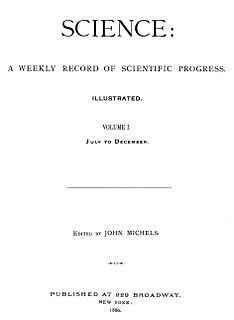 Science, also widely referred to as Science Magazine, is the peer-reviewed academic journal of the American Association for the Advancement of Science (AAAS) and one of the world's top academic journals. It was first published in 1880, is currently circulated weekly and has a subscriber base of around 130,000. Because institutional subscriptions and online access serve a larger audience, its estimated readership is 570,400 people.

The Japan Prize is awarded to people from all parts of the world whose "original and outstanding achievements in science and technology are recognized as having advanced the frontiers of knowledge and served the cause of peace and prosperity for mankind." The Prize is presented by the Japan Prize Foundation. Since its inception in 1985, the Foundation has awarded 81 people from 13 countries.

Journal of Experimental Medicine is a monthly peer-reviewed medical journal published by Rockefeller University Press that publishes research papers and commentaries on the physiological, pathological, and molecular mechanisms that encompass the host response to disease. The journal prioritizes studies on intact organisms and has made a commitment to publishing studies on human subjects. Topics covered include immunology, inflammation, infectious disease, hematopoiesis, cancer, stem cells and vascular biology. The journal has no single editor-in-chief, but thirteen academic editors.

The Journal of Allergy and Clinical Immunology is a monthly peer-reviewed medical journal covering research on allergy and immunology. It is one of two official journals of the American Academy of Allergy, Asthma, and Immunology. The journal was established in 1929 as the Journal of Allergy and obtained its current name in 1971. The name change was purportedly related to a change in the attitude among physicians about the breadth of applicability of the term "allergy". The journal has been published under the Mosby imprint since its inception.

Drug Discovery Today is a monthly peer-reviewed scientific journal that is published by Elsevier. It was established in 1996 and publishes reviews on all aspects of preclinical drug discovery from target identification and validation through hit identification, lead identification and optimisation, to candidate selection.

Allied Academies is a reportedly fraudulent corporation chartered under the laws of North Carolina. Its postal address is in London, United Kingdom. It presents itself as an association of scholars, with supporting and encouraging research and the sharing and exchange of knowledge as its stated aims. The organization consists of 30 affiliate academies, which provide awards to academics and publish academic journals both online and in hard copy for members. Since 2015 the organization has been listed on Jeffrey Beall's list of "potential, possible, or probable predatory scholarly open-access publishers". It is in a partnership with OMICS Publishing Group which uses its website and logo. In 2018, OMICS owner Srinubabu Gedela declared that he had informed the Nevada court that Allied Academies was a subsidiary of OMICS International. During a conference in 2018, they falsely listed a prominent chemist among its organizing committee who had not agreed to this and was not affiliated with Allied Academies.

International Immunology is a peer-reviewed medical journal published by Oxford University Press on behalf of the Japanese Society for Immunology, addressing studies in allergology and immunology.

The Indian Journal of Medical Research is a peer-reviewed online open-access medical journal, available as a print-on-demand compilation. It is published by Medknow Publications on behalf of the Indian Council of Medical Research. Since 1977, it has been published monthly with six issues per volume. The journal publishes original "technical and clinical studies related to health, ethical and social issues" in biomedical research as well as narrative and evidence-based review articles. The current editor-in-chief is Anju Sharma, who took up the position in January 2012 after previously having served in associate editor positions. In addition to regular issues, the journal publishes special issues and supplements, with the latter published under a different ISSN.

Expert Review of Clinical Immunology is a monthly peer-reviewed medical journal covering all aspects of clinical immunology. It is part of the Expert Review series, published by Informa. The editors-in-chief are Thomas Forsthuber and Timothy Radstake. The journal was established in 2005. According to the Journal Citation Reports, the journal has a 2013 impact factor of 3.342.

Teruko "Terry" Ishizaka was a Japanese scientist and immunologist who along with her husband Kimishige Ishizaka discovered the antibody class Immunoglobulin E (IgE) in 1966. Their work was regarded as a major breakthrough in the understanding of allergy, and for this work she received the 1972 Passano Award and the 1973 Gairdner Foundation International Award. She was known in the science world for her generosity and collaborative spirit.

Richard Barclay Gallagher is a Scottish immunologist, science editor, and academic publisher. He is the president and editor-in-chief of Annual Reviews. He graduated with a doctoral degree from the University of Glasgow and was a researcher at Trinity College Dublin before he began working in academic publishing in 1989, holding positions with Elsevier and the journals Science and Nature. In the 2000s, he was the editor of the magazine The Scientist. In 2015, he became president and editor-in-chief of Annual Reviews, where he oversaw the expansion into new journal titles, launched its first online magazine Knowable Magazine, and developed the "Subscribe to Open" initiative for open access publishing.