Morgan Kaufmann Publishers is a Burlington, Massachusetts (San Francisco, California until 2008) based publisher specializing in computer science and engineering content.

The company was founded in 1984 by publishers Michael B. Morgan and William Kaufmann and computer scientist Nils Nilsson. It was held privately until 1998, when it was acquired by Harcourt General and became an imprint of the Academic Press, a subsidiary of Harcourt. [1] [2] Harcourt was acquired by Reed Elsevier in 2001; Morgan Kaufmann is now an imprint of the Science and Technology division of Elsevier. 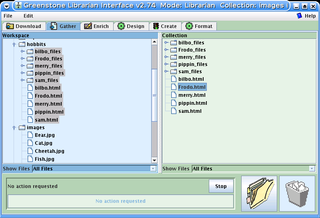 Greenstone is a suite of software tools for building and distributing digital library collections on the Internet or CD-ROM. It is open-source, multilingual software, issued under the terms of the GNU General Public License. Greenstone is produced by the New Zealand Digital Library Project at the University of Waikato, and has been developed and distributed in cooperation with UNESCO and the Human Info NGO in Belgium.

James F. Blinn is an American computer scientist who first became widely known for his work as a computer graphics expert at NASA's Jet Propulsion Laboratory (JPL), particularly his work on the pre-encounter animations for the Voyager project, his work on the 1980 Carl Sagan documentary series Cosmos, and the research of the Blinn–Phong shading model.

Nancy Ann Lynch is a mathematician, a theorist, and a professor at the Massachusetts Institute of Technology. She is the NEC Professor of Software Science and Engineering in the EECS department and heads the "Theory of Distributed Systems" research group at MIT's Computer Science and Artificial Intelligence Laboratory.

Academic Press is an academic book publisher founded in 1941. It was acquired by Harcourt, Brace & World in 1969. Reed Elsevier bought Harcourt in 2000, and Academic Press is now an imprint of Elsevier.

David Blair Kirk is a computer scientist and former chief scientist and vice president of architecture at NVIDIA. As of 2019, he is an independent consultant and advisor.

MDL Information Systems, Inc. was a provider of R&D informatics products for the life sciences and chemicals industries. The company was launched as a computer-aided drug design firm in January 1978 in Hayward, California. The company was acquired by Symyx Technologies, Inc. in 2007. Subsequently Accelrys merged with Symyx. The Accelrys name was retained for the combined company. In 2014 Accelrys was acquired by Dassault Systemes. The Accelrys business unit was renamed BioVia.

Jiawei Han is a Chinese-American computer scientist and writer. He currently holds the position of Abel Bliss Professor in the Department of Computer Science at the University of Illinois at Urbana-Champaign. His research focuses on data mining, data warehousing, database systems, data mining from spatiotemporal data, Web data, and social/information network data.

David G. Messerschmitt is an engineer and professor emeritus at the University of California, Berkeley in the Department of Electrical Engineering and Computer Sciences in the UC Berkeley College of Engineering. He retired from UC Berkeley in 2005. At present he is conducting research at Berkeley, is a visiting professor in the Software Business Laboratory at the Helsinki University of Technology, and is doing research on interstellar communications at the SETI Institute. Messerschmitt also serves on the Advisory Council of METI.

Ronald Baecker is an Emeritus Professor of Computer Science and Bell Chair in Human-Computer Interaction at the University of Toronto. He was the co-founder of the Dynamic Graphics Project, and is the founder of the Knowledge Media Design Institute (KMDI) and the Technologies for Aging Gracefully Lab (TAGlab). He is the author of Computers and Society: Modern Perspectives, published by Oxford University Press in 2019.

Janet Lynne Kolodner is an American cognitive scientist and learning scientist and Regents' Professor Emerita in the School of Interactive Computing, College of Computing at the Georgia Institute of Technology. She was Founding Editor in Chief of The Journal of the Learning Sciences and served in that role for 19 years. She was Founding Executive Officer of the International Society of the Learning Sciences (ISLS). From August, 2010 through July, 2014, she was a program officer at the National Science Foundation and headed up the Cyberlearning and Future Learning Technologies program. Since finishing at NSF, she is working toward a set of projects that will integrate learning technologies coherently to support disciplinary and everyday learning, support project-based pedagogy that works, and connect to the best in curriculum for active learning. As of July, 2020, she is a Professor of the Practice at the Lynch School of Education at Boston College and co-lead of the MA Program in Learning Engineering.

Katherine Isbister is a game and human computer interaction researcher and designer, currently a professor in computational media at the University of California, Santa Cruz. Until June 2015, she was an associate professor at New York University, with a joint appointment in computer science and in the Game Center at the Tisch School of the Arts. At NYU, she was founding research director of the Game Innovation Lab. Isbister's research and design contributions center on how to create more compelling emotional and social qualities in games and other digital experiences. She has innovated in the areas of character/avatar/agent design and in researching and evaluating the user experience. Her book, Better Game Characters by Design: A Psychological Approach, was nominated in 2006 for a Game Developer Magazine Frontline award. She is also co-editor of a book which outlines the state of the art in user research practices in studying games, titled Game Usability: Advice from the Experts for Advancing the Player Experience.

Ryszard S. Michalski was a Polish-American computer scientist. Michalski was Professor at George Mason University and a pioneer in the field of machine learning.

Michael Genesereth is a logician and computer scientist, who is most known for his work on computational logic and applications of that work in enterprise management, computational law, and general game playing. Genesereth is professor in the Computer Science Department at Stanford University and a professor by courtesy in the Stanford Law School. His 1987 textbook on Logical Foundations of Artificial Intelligence remains one of the key references on Symbolic artificial intelligence. He is the author of the influential Game Description Language (GDL) and Knowledge Interchange Format (KIF), the latter of which led to the ISO Common Logic standard.