The SSRN, formerly known as Social Science Research Network, is a repository for preprints devoted to the rapid dissemination of scholarly research in the social sciences and humanities and more. Elsevier bought SSRN from Social Science Electronic Publishing Inc. in May 2016. [1]

SSRN was founded in 1994 by Michael Jensen and Wayne Marr, both financial economists. [2]

In January 2013, SSRN was ranked the biggest open-access repository in the world by Ranking Web of Repositories (an initiative of the Cybermetrics Lab, a research group belonging to the Spanish National Research Council), [3] measured by number of PDF files, backlinks and Google Scholar results. [4]

In May 2016, SSRN was bought from Social Science Electronic Publishing Inc. by Elsevier. [1] On 17 May 2016, the SSRN founder and chairman Michael C. Jensen wrote a letter to the SSRN community in which he cited SSRN CEO Gregg Gordon's post on the Elsevier Connect [5] and the "new opportunities" coming from the fusion, [6] such as a broader global network and the freedom "to upload and download papers" (with more data, more resources, as well as new management tools). While predicting "some conflicts" on the interests alignment of the former competitors, he defined them as "surmountable". [7]

In July 2016 there were reports of papers being removed from SSRN without notice; revision comments from SSRN indicated this was due to copyright concerns. [8] Gordon characterized the issue as a mistake affecting about 20 papers. [9]

Academic papers in Portable Document Format can be uploaded directly to the SSRN site by authors and are then available around the world via download. Users can also subscribe to abstracting emails covering a broad range of research areas and topic specialties. These distributing emails contain abstracts (with links to the full text where applicable) of papers recently submitted to SSRN in the respective field.

SSRN, like other preprint services, circulates publications throughout the scholarly community at an early stage, permitting the author to incorporate comments into the final version of the paper before its publication in a journal. Moreover, even if access to the published paper is restricted, access to the original working paper remains open through SSRN, so long as the author decides to keep the paper up. Often authors take papers down at the request of publishers, particularly if they are published by commercial or university presses that depend on payment for paper copies or online access. [10]

Academic papers in PDF can be uploaded directly to the SSRN site by authors and may then be available for downloading. [11] As of 2019, download by users is generally subject to registration or completion of a ReCAPTCHA challenge and therefore SSRN is not considered by some to be a suitable open access location, [12] unlike open archives like most institutional repositories.

Publishers and institutions can upload papers and charge a fee for readers to download them. [13]

On SSRN, authors and papers are ranked by their number of downloads, which has become an informal indicator of popularity on prepress and open access sites. [14] 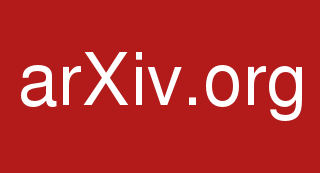 arXiv is an open-access repository of electronic preprints and postprints approved for posting after moderation, but not peer review. It consists of scientific papers in the fields of mathematics, physics, astronomy, electrical engineering, computer science, quantitative biology, statistics, mathematical finance and economics, which can be accessed online. In many fields of mathematics and physics, almost all scientific papers are self-archived on the arXiv repository before publication in a peer-reviewed journal. Some publishers also grant permission for authors to archive the peer-reviewed postprint. Begun on August 14, 1991, arXiv.org passed the half-million-article milestone on October 3, 2008, and had hit a million by the end of 2014. As of April 2021, the submission rate is about 16,000 articles per month. 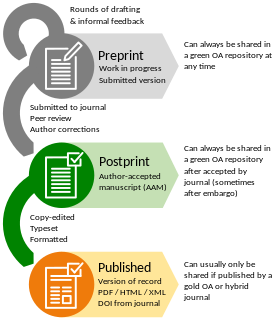 An academic journal or scholarly journal is a periodical publication in which scholarship relating to a particular academic discipline is published. Academic journals serve as permanent and transparent forums for the presentation, scrutiny, and discussion of research. They are usually peer-reviewed or refereed. Content typically takes the form of articles presenting original research, review articles, or book reviews. The purpose of an academic journal, according to Henry Oldenburg, is to give researchers a venue to "impart their knowledge to one another, and contribute what they can to the Grand design of improving natural knowledge, and perfecting all Philosophical Arts, and Sciences."

Google Scholar is a freely accessible web search engine that indexes the full text or metadata of scholarly literature across an array of publishing formats and disciplines. Released in beta in November 2004, the Google Scholar index includes most peer-reviewed online academic journals and books, conference papers, theses and dissertations, preprints, abstracts, technical reports, and other scholarly literature, including court opinions and patents. While Google does not publish the size of Google Scholar's database, scientometric researchers estimated it to contain roughly 389 million documents including articles, citations and patents making it the world's largest academic search engine in January 2018. Previously, the size was estimated at 160 million documents as of May 2014. An earlier statistical estimate published in PLOS ONE using a Mark and recapture method estimated approximately 80–90% coverage of all articles published in English with an estimate of 100 million. This estimate also determined how many documents were freely available on the internet.

One definition of Open science holds that it is the movement to make scientific research and its dissemination accessible to all levels of an inquiring society, amateur or professional. Open science is transparent and accessible knowledge that is shared and developed through collaborative networks. It encompasses practices such as publishing open research, campaigning for open access, encouraging scientists to practice open-notebook science, and generally making it easier to publish and communicate scientific knowledge.

HAL is an open archive where authors can deposit scholarly documents from all academic fields. It has a very good position in the international web repository ranking.

hprints is an archive for electronic preprints of academic papers in the fields of arts and humanities. It can be accessed freely via the Internet since it is an open access repository aiming at making scholarly documents publicly available to the widest possible audience.

Academia.edu is an American for-profit social networking website for academics. It began as a free and open repository of academic journal articles and registered a .edu domain name when this was not limited to educational institutions.

The Cybermetrics Lab is a research group of the Spanish National Research Council (CSIC). The organization is responsible for editing the Webometrics Ranking of World Universities. Currently more than 48,000 web domains of academic and research organizations are analyzed and are ranked according to their web presence and link visibility.

Data publishing is the act of releasing research data in published form for use by others. It is a practice consisting in preparing certain data or data set(s) for public use thus to make them available to everyone to use as they wish. This practice is an integral part of the open science movement. There is a large and multidisciplinary consensus on the benefits resulting from this practice.

Sci-Hub is a shadow library website that provides free access to millions of research papers and books, without regard to copyright, by bypassing publishers' paywalls in various ways. Sci-Hub was founded by Alexandra Elbakyan in 2011 in Kazakhstan in response to the high cost of research papers behind paywalls. The site is extensively used worldwide. In September 2019, the site's owners said that it served approximately 400,000 requests per day. The number of articles claimed is frequently updated on the site's home page, being over 85 million in February 2021.

SocArXiv is an online paper server for the social sciences founded by sociologist Philip N. Cohen in partnership with the non-profit Center for Open Science. It is an open archive based on the ArXiv preprint server model used for hard sciences, mathematics, and computer science. The site describes itself as an "open archive of the social sciences, [which] provides a free, non-profit, open access platform for social scientists to upload working papers, preprints, and published papers, with the option to link data and code." It also hosts papers in the areas of arts and humanities, education, and law.