The core company, Butterworth-Springer, started in 1948 to bring the "Springer know-how and techniques of aggressive publishing in science" [1] to Britain. Paul Rosbaud was the man with the knowledge. When Maxwell acquired the company in 1951, Rosbaud held a one-quarter share. [1] They changed the house name to Pergamon Press, using a logo that was a reproduction of a Greek coin from Pergamon. Maxwell and Rosbaud worked together growing the company until May 1956, when, according to Joe Haines, Rosbaud was sacked.

When Pergamon Press started it had only six serials and two books. Initially the company headquarters was in Fitzroy Square in West End of London. In 1959 the company moved into Headington Hill Hall, a country home rented from the city of Oxford.

In 1960 Brian Cox joined Pergamon Press as subscription manager. After the founders' deaths, Cox has become the primary witness to the phenomenal rise of Pergamon Press in the Science, Technology, and Medicine (STM) sector of publishing. The 59 Pergamon academic journals in 1960 became 418 journals in 1992. Cox recalls that in the process some 700 were launched, many transmogrifying rather than ceasing. Cox says "The secret of Pergamon's success was to publish a large number of journals, so that the established titles could support the new ones during their formative years". [2]

In 1962 Pergamon Press started the series called The Commonwealth and International Library of Sciences, Technology, Engineering, and Liberal Studies. By 1970 this series had 1000 titles. Brian Cox says that in all, Pergamon published 7,000 monographs for various authors. [2]

In 1964 Pergamon Press became a public company. With its growth and export performance, the company was a recipient of one of the Queen's Awards for Enterprise in 1966. That year saw construction of a new office block and warehouse at Headington Hill. Pergamon ventured to produce an Encyclopaedic Dictionary of Physics, in nine volumes and four supplements in the decade from 1961.

In 1969, Maxwell lost control of Pergamon and was ejected from the board. [3] An inquiry by the Department of Trade and Industry (DTI) under the Takeover Code of the time reported in mid-1971: [4] "We regret having to conclude that, notwithstanding Mr Maxwell's acknowledged abilities and energy, he is not in our opinion a person who can be relied on to exercise proper stewardship of a publicly quoted company." It was found that Maxwell had contrived to maximise Pergamon's share price through transactions between his private family companies. [5] Maxwell reacquired Pergamon in 1974 after borrowing funds. [6]

Pergamon continued with International Encyclopedias in biotechnology, chemistry, education, engineering, entomology, linguistics, materials science, and pharmacology and toxicology. The education volume won the Dartmouth Medal from the American Library Association in 1986 as the best reference work of the year. [2]

Pergamon also has offices in Elmsford, New York, in the United States.

Maxwell sold Pergamon Press to academic publishing giant Elsevier in March 1991 for £440 million; the funds were used to repay the large borrowings taken on by Maxwell in taking control of New York Daily News. [7] [8]

Maxwell retained Pergamon's US books (which became part of sister company Macmillan Inc.), Chess and Bridge, and some smaller properties. [9] The imprint "Pergamon Press" continues to be used to identify journals now published by Elsevier.

Paul Rosbaud, was a metallurgist and scientific adviser for Springer Verlag in Germany before and during World War II. He continued in science publishing after the war with Pergamon Press in Oxford, England. In 1986 Arnold Kramish revealed the undercover work of Rosbaud for England during the war in the book The Griffin. It was Rosbaud who dispelled anxiety over a "German atom bomb".

Lippincott Williams & Wilkins (LWW) is an American imprint of the publishing conglomerate Wolters Kluwer. Under the LWW brand, Wolters Kluwer publishes scientific, technical, and medical content such as textbooks, reference works, and over 275 scientific journals. Publications are aimed at physicians, nurses, clinicians, and students.

Ian Robert Maxwell was a British media proprietor, former member of Parliament (MP), suspected spy, and fraudster. Originally from Czechoslovakia, Maxwell rose from poverty to build an extensive publishing empire. After his death, huge discrepancies in his companies' finances were revealed, including his fraudulent misappropriation of the Mirror Group pension fund.

Butterworth–Heinemann is a British publishing company specialized in professional information and learning materials for higher education and professional training, in printed and electronic forms. It was formed in 1990 by the merger of Heinemann Professional Publishing and Butterworths Scientific, both subsidiaries of Reed International.

D. Reidel was an academic publishing company based in Dordrecht established in the 1960s which was independent until the 1990s.

Solicitors Journal is a monthly legal journal published in the United Kingdom by the International In-house Counsel Journal, Cambridge. It was established in 1856 and covers "practical and independent updates and analysis about the latest developments affecting the legal profession." The magazine has its headquarters in Cambridge.

Aberdeen University Press (AUP) is the publishing arm of the University of Aberdeen. Launched in October 2013, AUP is built on the legacy of the defunct printing firm and publishing house of the same name, which existed from 1900-1996. Unlike the defunct AUP, which worked closely with the University of Aberdeen while remaining a legally separate entity, the new AUP is directly affiliated with the University. AUP's earliest progenitor was established in 1840 in Aberdeen, Scotland. It existed as a private firm, Arthur King and Co. until 1900 when the public company, Aberdeen University Press was created to acquire it. AUP's business history stayed local until 1970; then from 1970 until AUP's liquidation in 1996, the company was tossed between a number of corporate giants. For most of its existence AUP operated primarily as a printing firm; up until the 1980s, its publications list consisted of only the occasional commissioned title.

Christine Yvonne Malina-Maxwell is a British Internet content pioneer and educator, best known as the creator and co-founder of Magellan. Maxwell also co-founded the software company Chiliad and is the author of several books. She is the Program Manager of Learning Technologies at the University of Texas at Dallas. 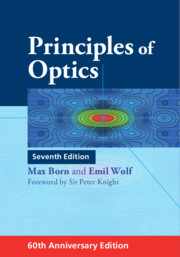 Principles of Optics, colloquially known as Born and Wolf, is an optics textbook written by Max Born and Emil Wolf that was initially published in 1959 by Pergamon Press. After going through six editions with Pergamon Press, the book was transferred to Cambridge University Press who issued an expanded seventh edition in 1999. A 60th anniversary edition was published in 2019 with a foreword by Sir Peter Knight. It is considered a classic science book and one of the most influential optics books of the twentieth century.