Embase (often styled EMBASE for Excerpta Medica dataBASE) is a biomedical and pharmacological bibliographic database of published literature designed to support information managers and pharmacovigilance in complying with the regulatory requirements of a licensed drug. Embase, produced by Elsevier, contains over 32 million records from over 8,500 currently published journals from 1947 [1] to the present. Through its international coverage, daily updates, and drug indexing with EMTREE, Embase enables tracking and retrieval of drug information in the published literature. Each record is fully indexed and Articles in Press are available for some records and In Process are available for all records, ahead of full indexing. Embase's international coverage expands across biomedical journals from 95 countries and is available through a number of database vendors. [2]

In 1946, the beginnings of Embase was created as Excerpta Medica (EM) Abstract Journals by a group of Dutch physicians who promoted the flow of medical knowledge and reports post World War II. Included in EM were 13 journal sections which categorized the medical school curriculum by anatomy, pathology, physiology, internal medicine, and other basic clinical specialties. This database lasted until 1972 when it merged with Elsevier.

In 1972, EM had joined with Elsevier and later, in 1974, formed EMBASE (Excerpta Medica database) which had released electronic access to abstract journals. Following feedback from the EMBASE user community, EMBASE Classic was created as a separate database to supplement EMBASE as a backfile of medical journals from 1947-1973 which provides valuable documentation of drugs, adverse effects, endogenous compounds, etc. found at the time. [3]

In 2010, Excerpta Medica, excluding EMBASE, was sold by Elsevier to the Omnicom Group. [4]

In addition to the 28 million reports, Embase's database steadily rises each year at a rate of over 900,000 records. [5] This wide expanse of information is used in both professional and educational environments for retrieving any published biomedical or drug related information. Currently, Embase allows further customization for a personal experience such as implementing a RSS feed and email alert system. With new drug and disease-related information constantly released, Embase is updated daily to provide a comprehensive and reliable source of information.

Antiviral Therapy is a peer-reviewed medical journal published by International Medical Press. It publishes primary papers and reviews on all aspects of the clinical development of antiviral drugs, including clinical trial results, drug resistance, viral diagnostics, drug safety, pharmacoepidemiology, and vaccines. Antiviral Therapy is an official publication of the International Society for Antiviral Research.

The FEBS Journal is a biweekly peer-reviewed scientific journal published by John Wiley & Sons on behalf of the Federation of European Biochemical Societies. It covers research on all aspects of biochemistry, molecular biology, cell biology, and the molecular bases of disease. The Editor-in-Chief is Seamus Martin, who took over from Richard Perham in 2014.

The Journal of Manipulative and Physiological Therapeutics is a peer-reviewed medical journal of chiropractic. It is published by Mosby on behalf of the American Chiropractic Association, of which it is an official journal.

The American Journal of Medicine is a peer-reviewed medical journal and the official journal of the Alliance for Academic Internal Medicine. It was established in 1946. The journal is published monthly by Elsevier under its Excerpta Medica imprint. It is also known as "the green journal".

The Annals of Saudi Medicine is a bimonthly peer-reviewed medical journal published by the King Faisal Specialist Hospital and Research Centre. It was established in 1981 as the King Faisal Specialist Hospital Medical Journal and obtained its current name in 1985. Publication frequency increased from quarterly to bimonthly in 1988. The editor-in-chief is Nasser Al-Sanea.

Phytomedicine is a monthly peer-reviewed medical journal covering the fields of phytotherapy, phytomedicine, and toxicology of plants and their extracts. The journal was established in 1994. It is published by Elsevier and the editor-in-chief is Alexander Panossian.

Hippocampus is a monthly peer-reviewed scientific journal established in 1991. It is published by John Wiley & Sons and covers the neurobiology of the hippocampal formation and related structures. The founding editors-in-chief were David Amaral and Menno Witter, who were succeeded in 1998 by Howard Eichenbaum, who remained in this position until he died in 2017.

The Journal of Investigative Dermatology is a peer-reviewed medical journal covering dermatology. It has been published by Elsevier since 2016 and the editor-in-chief is Mark C. Udey.

Clinical Genetics is a monthly peer-reviewed medical journal covering medical genetics. It was established in 1970 and is published by Wiley-Blackwell. The editor-in-chief is Reiner A. Veitia.

The British Journal of Haematology is a peer-reviewed medical journal focusing on hematology and other blood-related topics, such as blood diseases and their treatment. It is published by Wiley-Blackwell on behalf of the British Society for Haematology.

American Journal of Ophthalmology is a monthly peer-reviewed medical journal covering ophthalmology. It was established in 1884 and is published by Elsevier. The editor-in-chief is Richard K. Parrish II.

Pathogens and Global Health is a peer-reviewed medical journal published by Maney Publishing. It covers tropical diseases, including their microbiology, epidemiology and molecular biology, as well as medical entomology, HIV/AIDS, malaria, and tuberculosis. The editor-in-chief is Andrea Crisanti.

Parasitology is a peer-reviewed scientific journal covering the area of parasitology, including the biochemistry, molecular biology, genetics, ecology and epidemiology of eukaryotic parasites, and the relationship between the host and the parasite. It is published fourteen times a year by Cambridge University Press and was established in 1908. The editor-in-chief is John Russell Stothard FRGS FLS.

Protist is a peer-reviewed scientific journal focusing on protists. It was founded as Archiv für Protistenkunde by editor Fritz Shaudinn in 1902, and originally published by Gustav Fischer and later Jena. The journal is now published by Elsevier, and is currently edited by Michael Melkonian. The journal changed its name to Protist in 1998. 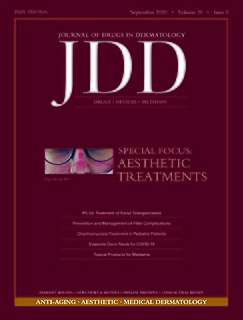 The Journal of Drugs in Dermatology is a monthly peer-reviewed medical journal of dermatology published by Sanovaworks. The journal was established in 2002 by Mohs surgeon Perry Robins, founder of the Skin Cancer Foundation. It is the flagship publication of Sanovaworks, publisher of Derm-in-Review and Next Steps, as well as the sponsor of JDD Podcasts and two annual medical specialty conferences, Skin of Color Update (SOCU), and the ODAC Dermatology Aesthetic and Surgical (ODAC) conferences.