David Jay Julius (born November 4, 1955) is an American physiologist and Nobel Prize laureate known for his work on molecular mechanisms of pain sensation and heat, including the characterization of the TRPV1 and TRPM8 receptors that detect capsaicin, menthol, and temperature. He is a professor at the University of California, San Francisco.

Julius was born to an Russian Jewish family in Brighton Beach, Brooklyn, New York, [5] where he attended Abraham Lincoln High School. [6] He earned his undergraduate degree from Massachusetts Institute of Technology in 1977. He attained his doctorate from University of California, Berkeley in 1984, under joint supervision of Jeremy Thorner and Randy Schekman, where he identified Kex2 as the founding member of furin-like proprotein convertases. [7] In 1989, he completed his post-doctoral training with Richard Axel at Columbia University where he cloned and characterized the serotonin 1c receptor. [8]

While at Berkeley and Columbia, Julius became interested in how psilocybin mushrooms and lysergic acid diethylamide work, which led him to look more broadly into how things from nature interact with human receptors. [6]

He started his career as faculty at the University of California, San Francisco in 1989. [9] [10] In 1997, Julius's lab cloned and characterized TRPV1 which is the receptor that detects capsaicin, the chemical in chili peppers that makes them "hot". [11] They found that TRPV1 also detects noxious heat (thermoception). [11] [12] TRPV1 is part of a large family of structurally related TRP (transient receptor potential) cation channels. Animals that lack TRPV1 (using genetic knockouts of the protein) lose sensitivity to noxious heat and capsaicin. [13]

Julius's lab has also cloned and characterized TRPM8 (CMR1) and TRPA1, both members of the TRP superfamily. They demonstrated that TRPM8 detects menthol and cooler temperatures [14] [15] and TRPA1 detects mustard oil (allyl isothiocyanate). [16] These observations suggested that TRP channels detect a range of temperatures and chemicals. David Julius's lab has also made contributions to the study of nociception by discovering toxins that modulate these channels, [17] describing unique adaptations of the channels in diverse species [18] and solving the cryo-EM structures of numerous channels. [19] [20]

In 2000, Julius was awarded the inaugural Perl-UNC Neuroscience Prize for his work on cloning the capsaicin receptor. In 2010, he won the Shaw Prize for his work identifying the ion channels involved in various aspects of nociception. In 2014, he was honored by Johnson & Johnson with the Dr. Paul Janssen Award for Biomedical Research for discovering the molecular basis for pain and thermosensation. In 2017, he won the Gairdner Foundation International Award [23] and the HFSP Nakasone Award. [24] He has also been awarded the 2010 Prince of Asturias Prize for Technical and Scientific Research, the 2020 Breakthrough Prize in Life Sciences, [25] and the 2020 Kavli Prize in Neuroscience (together with Ardem Patapoutian) [26] and the 2020 BBVA Foundation Frontiers of Knowledge Award. [27]

In 2021, he was awarded the Nobel Prize in Physiology or Medicine jointly with Ardem Patapoutian for their discoveries of receptors for temperature and touch. [28]

Ion channels are pore-forming membrane proteins that allow ions to pass through the channel pore. Their functions include establishing a resting membrane potential, shaping action potentials and other electrical signals by gating the flow of ions across the cell membrane, controlling the flow of ions across secretory and epithelial cells, and regulating cell volume. Ion channels are present in the membranes of all cells. Ion channels are one of the two classes of ionophoric proteins, the other being ion transporters.

Thermoception or thermoreception is the sensation and perception of temperature, or more accurately, temperature differences inferred from heat flux. It deals with a series of events and processes required for an organism to receive a temperature stimulus, convert it to a molecular signal, and recognize and characterize the signal in order to trigger an appropriate defense response.

A thermoreceptor is a non-specialised sense receptor, or more accurately the receptive portion of a sensory neuron, that codes absolute and relative changes in temperature, primarily within the innocuous range. In the mammalian peripheral nervous system, warmth receptors are thought to be unmyelinated C-fibres, while those responding to cold have both C-fibers and thinly myelinated A delta fibers. The adequate stimulus for a warm receptor is warming, which results in an increase in their action potential discharge rate. Cooling results in a decrease in warm receptor discharge rate. For cold receptors their firing rate increases during cooling and decreases during warming. Some cold receptors also respond with a brief action potential discharge to high temperatures, i.e. typically above 45 °C, and this is known as a paradoxical response to heat. The mechanism responsible for this behavior has not been determined.

Transient receptor potential channels are a group of ion channels located mostly on the plasma membrane of numerous animal cell types. Most of these are grouped into two broad groups: Group 1 includes TRPC, TRPV, TRPVL, TRPM, TRPS, TRPN, and TRPA. Group 2 consists of TRPP and TRPML. Other less-well categorized TRP channels exist, including yeast channels and a number of Group 1 and Group 2 channels present in non-animals. Many of these channels mediate a variety of sensations such as pain, temperature, different kinds of tastes, pressure, and vision. In the body, some TRP channels are thought to behave like microscopic thermometers and used in animals to sense hot or cold. Some TRP channels are activated by molecules found in spices like garlic (allicin), chili pepper (capsaicin), wasabi ; others are activated by menthol, camphor, peppermint, and cooling agents; yet others are activated by molecules found in cannabis or stevia. Some act as sensors of osmotic pressure, volume, stretch, and vibration. Most of the channels are activated or inhibited by signaling lipids and contribute to a family of lipid-gated ion channels.

TRPV is a family of transient receptor potential cation channels in animals. All TRPVs are highly calcium selective. 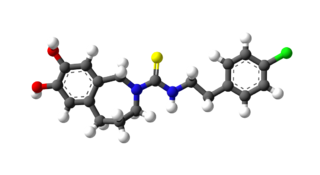 Capsazepine is a synthetic antagonist of capsaicin. It is used as a biochemical tool in the study of TRPV ion channels.

Transient receptor potential cation channel, subfamily M, member 2, also known as TRPM2, is a protein that in humans is encoded by the TRPM2 gene.

Transient receptor potential cation channel subfamily V member 2 is a protein that in humans is encoded by the TRPV2 gene. TRPV2 is a nonspecific cation channel that is a part of the TRP channel family. This channel allows the cell to communicate with its extracellular environment through the transfer of ions, and responds to noxious temperatures greater than 52 °C. It has a structure similar to that of potassium channels, and has similar functions throughout multiple species; recent research has also shown multiple interactions in the human body.

Transient receptor potential cation channel subfamily M (melastatin) member 8 (TRPM8), also known as the cold and menthol receptor 1 (CMR1), is a protein that in humans is encoded by the TRPM8 gene. The TRPM8 channel is the primary molecular transducer of cold somatosensation in humans. In addition, mints can desensitize a region through the activation of TRPM8 receptors.

Transient receptor potential cation channel subfamily M member 3 is a protein that in humans is encoded by the TRPM3 gene.

Vampire bats have developed a specialized system using infrared-sensitive receptors on their nose-leaf to prey on homeothermic (warm-blooded) vertebrates. Trigeminal nerve fibers that innervate these IR-sensitive receptors may be involved in detection of infrared thermal radiation emitted by their prey. This may aid bats in locating blood-rich areas on their prey. In addition, neuroanatomical and molecular research has suggested possible similarities of IR-sensing mechanisms between vampire bats and IR-sensitive snakes. Infrared sensing in vampire bats has not yet been hypothesized to be image forming, as it was for IR-sensitive snakes. While the literature on IR-sensing in vampire bats is thin, progress continues to be made in this field to identify how vampire bats can sense and use infrared thermal radiation.

The transient receptor potential Ca2+ channel (TRP-CC) family (TC# 1.A.4) is a member of the voltage-gated ion channel (VIC) superfamily and consists of cation channels conserved from worms to humans. The TRP-CC family also consists of seven subfamilies (TRPC, TRPV, TRPM, TRPN, TRPA, TRPP, and TRPML) based on their amino acid sequence homology:

RhTx is a small peptide toxin from Scolopendra subspinipes mutilans, also called the Chinese red-headed centipede. RhTx binds to the outer pore region of the temperature regulated TRPV1 ion channel, preferably in activated state, causing a downwards shift in the activation threshold temperature, which leads to the immediate onset of heat pain.

Diana M. Bautista is an American neuroscientist known for her work on the molecular mechanisms underlying itch, touch and pain. She is a full professor of cell and developmental biology in the Department of Molecular and Cell Biology and is affiliated with the Helen Wills Neuroscience Institute at University of California, Berkeley.

Vishva Mitra Dixit is a physician of Indian origin who is the current Vice President of Discovery Research at Genentech.

Ardem Patapoutian is an American molecular biologist, neuroscientist, and Nobel Prize laureate. He is known for his work in characterizing the PIEZO1, PIEZO2, and TRPM8 receptors that detect pressure, menthol, and temperature. Patapoutian is a neuroscience professor and Howard Hughes Medical Institute investigator at Scripps Research in La Jolla, California. He won the Nobel Prize in Physiology or Medicine in 2021 jointly with David Julius.

Holly Ann Ingraham is an American physiologist who is the Herzstein Professor of Molecular Physiology at the University of California, San Francisco. She studies women's health, in particular, sex-dependent central regulation of female metabolism and physiology. She was Elected to the American Association for the Advancement of Science in 2012, the American Academy of Arts and Sciences in 2019, and the National Academy of Sciences in 2021.