Physical Review is a peer-reviewed scientific journal established in 1893 by Edward Nichols. It publishes original research as well as scientific and literature reviews on all aspects of physics. It is published by the American Physical Society (APS). The journal is in its third series, and is split in several sub-journals each covering a particular field of physics. It has a sister journal, Physical Review Letters , which publishes shorter articles of broader interest.

Physical Review commenced publication in July 1893, organized by Cornell University professor Edward Nichols and helped by the new president of Cornell, J. Gould Schurman. The journal was managed and edited at Cornell in upstate New York from 1893 to 1913 by Nichols, Ernest Merritt, and Frederick Bedell. The 33 volumes published during this time constitute Physical Review Series I.

The American Physical Society (APS), founded in 1899, took over its publication in 1913 and started Physical Review Series II. The journal remained at Cornell under editor-in-chief G. S. Fulcher from 1913 to 1926, before relocating to the location of editor John Torrence Tate, Sr. [note 1] at the University of Minnesota. In 1929, the APS started publishing Reviews of Modern Physics , a venue for longer review articles.

During the Great Depression, wealthy scientist Alfred Loomis anonymously paid the journal's fees for authors who could not afford them. [1]

After Tate's death in 1950, the journals were managed on an interim basis still in Minnesota by E. L. Hill and J. William Buchta until Samuel Goudsmit and Simon Pasternack were appointed and the editorial office moved to Brookhaven National Laboratory on Eastern Long Island, New York. In July 1958, the sister journal Physical Review Letters was introduced to publish short articles of particularly broad interest, initially edited by George L. Trigg, who remained as editor until 1988.

The editorial office moved in 1980 to its present location across the expressway from Brookhaven National Laboratory. Goudsmit retired in 1974 and Pasternack in the mid-1970s. Past Editors in Chief include David Lazarus (1980–1990; University of Illinois at Urbana–Champaign), Benjamin Bederson (1990–1996; New York University), Martin Blume (1996–2007; Brookhaven National Laboratory), and Gene Sprouse (2007–2015; SUNY Stony Brook). The current Editor in Chief is Michael Thoennessen, whose term began in September 2017. [2]

To celebrate the hundredth anniversary of the journal, a memoir was published jointly by the APS and AIP. [3]

The APS has an online publication entitled Physics, [10] aiming to help physicists and physics students to learn about new developments outside of their own subfield. This now includes the general-interest articles that appeared as Physical Review Focus. A short-lived journal, also called Physics, was published by Pergamon Press and Physics Publishing Co. from 1964 through 1968, with the goal of printing "a selection of papers which are worth the attention of all physicists." [11] The four volumes of this journal were eventually made freely available online by the APS under the alternative title Physics Physique Физика , reflecting how the title was originally printed on the journal covers and how it was sometimes referred to in the years since. [12] [13] [14]

It also publishes Physical Review X, [15] an online-only open access journal. It is a peer-reviewed journal that publishes, as timely as possible, original research papers from all areas of pure, applied, and interdisciplinary physics. In 2014 Physical Review Applied [16] began publishing research across all aspects of experimental and theoretical applications of physics, including their interactions with other sciences, engineering, and industry. In 2016 the APS launched Physical Review Fluids "to include additional areas of fluid dynamics research", [17] and in 2017 it launched Physical Review Materials "to fill a gap" in the coverage of materials research. [18] In 2019 Physical Review Research was launched to provide a broad fully open-access journal at about the same selectivity level as the older A - E journals. [19] In 2020, PRX Quantum was launched to provide a home for and connection between the numerous research communities that make up quantum information science and technology, spanning from pure science to engineering to computer science and beyond. [19] 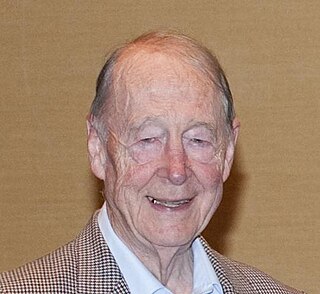 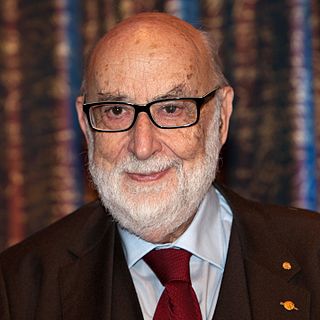 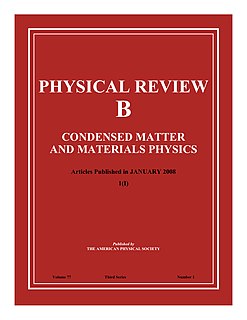 Physical Review B: Condensed Matter and Materials Physics is a peer-reviewed, scientific journal, published by the American Physical Society (APS). The Editor of PRB is Laurens W. Molenkamp. It is part of the Physical Review family of journals. The current Editor in Chief is Michael Thoennessen. PRB currently publishes over 4500 papers a year, making it one of the largest physics journals in the world. 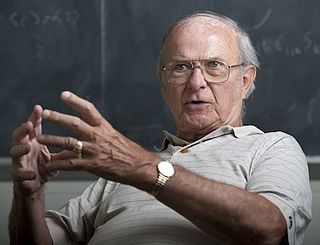 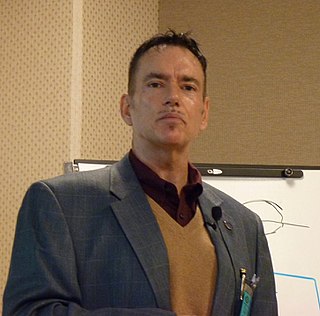 Daniel Amihud Lidar is the holder of the Viterbi Professorship of Engineering at the University of Southern California, where he is a Professor of Electrical Engineering, Chemistry, Physics & Astronomy. He is the Director and co-founder of the USC Center for Quantum Information Science & Technology (CQIST) as well as Scientific Director of the USC-Lockheed Martin Quantum Computing Center, notable for his research on control of quantum systems and quantum information processing.

Physical Review E is a peer-reviewed, scientific journal, published monthly by the American Physical Society. The main field of interest is collective phenomena of many-body systems. It is currently edited by Uwe C. Täuber. While original research content requires subscription, editorials, news, and other non-research content is openly accessible.

Pierre C. Hohenberg was a French-American theoretical physicist, who worked primarily on statistical mechanics. Hohenberg studied at Harvard, where he earned his bachelor's degree in 1956 and a master's degree in 1958, and his doctorate in 1962. From 1962 to 1963, he was at the Institute for Physical Problems in Moscow, followed by a stay at the École Normale Supérieure in Paris. From 1964 to 1995 he was at Bell Laboratories in Murray Hill. From 1985 to 1989, he was director of the department of theoretical physics and from 1989 to 1995 was "Distinguished Member of Technical Staff". From 1974 to 1977, he was also professor of theoretical physics at the TU München, where he had previously been a 1972–1973 guest professor. From 1995 to 2003 he was "Deputy Provost of Science and Technology" at Yale University. Subsequently, he was the Yale "Eugene Higgins Adjunct Professor of Physics and Applied Physics". Hohenberg was additionally from 1963 to 1964 and again in 1988 guest professor in Paris and in 1990–1991 a Lorentz-Professor in Leiden. In 2004 he became Senior Vice Provost of Research at New York University, a position held until 2011, when he stepped down to join the Physics Department as Professor. In 2012 he became Emeritus Professor of Physics at NYU.

Padma Kant Shukla was a distinguished pProfessor and first International Chair of the Physics and Astronomy Department of Ruhr-University Bochum in Germany. He was also the director of the International Centre for Advanced Studies in Physical Sciences at Ruhr-University Bochum. He held a Ph.D. in Physics from Banaras Hindu University in Varanasi, India and a second doctorate in Theoretical Plasma Physics from Umeå University in Sweden.

John Francis Brady is an American chemical engineer and the Chevron Professor of Chemical Engineering and Mechanical Engineering at the California Institute of Technology. He is a fluid mechanician and creator of the Stokesian dynamics method for simulating suspensions of spheres and ellipsoids in low Reynolds number flows. He is an elected fellow of the American Physical Society, a fellow of the Society of Rheology, as well as a member of the National Academy of Sciences, the National Academy of Engineering, and the American Academy of Arts and Sciences.

Elihu Abrahams was a theoretical physicist, specializing in condensed matter physics. He is mostly notable for his work on electron transport in disordered systems. 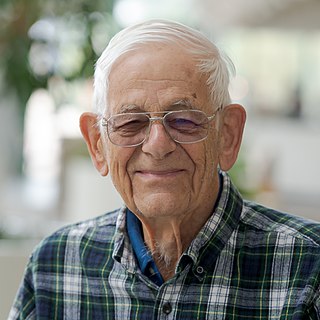 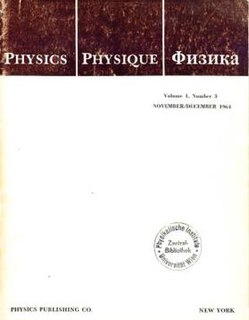 Physics Physique Физика, also known as various punctuations of Physics, Physique, Fizika, and as Physics for short, was a scientific journal published from 1964 through 1968. Founded by Philip Warren Anderson and Bernd T. Matthias, who were inspired by wide-circulation literary magazines like Harper's, the journal's original goal was to print papers of interest to scientists in all branches of physics. It is best known for publishing John Stewart Bell's paper on the result now known as Bell's theorem. Failing to attract sufficient interest as an unspecialized journal, Physics Physique Физика soon focused on solid-state physics before folding altogether in 1968. The four volumes of this journal were eventually made freely available online by the American Physical Society.

Francesca Ferlaino is an Italian-Austrian experimental physicist known for her research on quantum matter. She is a professor of physics at the University of Innsbruck.

The term of copyright on volumes published before 1924 has expired. Most of these volumes are available online for free in their entirety: