Thomas de Boues was Archdeacon of Totnes during 1215. [1] 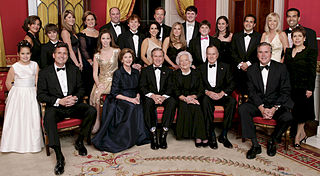 The Bush family is an American family that is prominent in the fields of politics, sports, entertainment, and business, founded by Obadiah Bush and Harriet Smith.

The American Economic Association (AEA) is a learned society in the field of economics, headquartered in Nashville, Tennessee. It publishes one of the most prestigious academic journals in economics: the American Economic Review. The AEA was established in 1885 in Saratoga, New York by younger progressive economists trained in the German historical school, including Richard T. Ely, Edwin Robert Anderson Seligman and Katharine Coman, the only woman co-founder; since 1900 it has been under the control of academics.

Mockingbird is a fictional character appearing in American comic books published by Marvel Comics. Mockingbird first appeared in Astonishing Tales #6 in 1971 as a supporting character and eventual love interest of Ka-Zar. She is soon revealed to be a highly trained agent of S.H.I.E.L.D., as well as a Ph.D in biology. She first uses the moniker "Mockingbird" in Marvel Team-Up #95, and goes on to be a member of several Avengers teams.

The Supreme Court of Illinois is the state supreme court, the highest court of the state of Illinois. The court's authority is granted in Article VI of the current Illinois Constitution, which provides for seven justices elected from the five appellate judicial districts of the state: three justices from the First District and one from each of the other four districts. Each justice is elected for a term of ten years and the chief justice is elected by the court from its members for a three-year term.

American Anthropologist is the flagship journal of the American Anthropological Association (AAA), published quarterly by Wiley. The "New Series" began in 1899 under an editorial board that included Franz Boas, Daniel G. Brinton, and John Wesley Powell. The current editor-in-chief is Deborah A. Thomas.

The New Jersey Republican State Committee (NJGOP) is the affiliate of the Republican Party in New Jersey. The Committee was founded in 1880. The party is currently led by Doug Steinhardt, who replaced Michael B. Lavery. Lavery replaced Sam Raia of Saddle River, New Jersey.

The Cherokee in the American Civil War were active in the Trans-Mississippi and Western Theaters. In the east, Confederate Cherokees led by William Holland Thomas hindered Union forces trying to use the Appalachian mountain passes of western North Carolina and eastern Tennessee. Out west, Confederate Cherokee Stand Watie led primarily Native Confederate forces in the Indian Territory, in what is now the state of Oklahoma.

Henry de Bolleghe was Archdeacon of Totnes during 1275.

The King's Birthday Honours 1945, celebrating the official birthday of King George VI, were announced on 14 June 1945 for the United Kingdom and British Empire.

The 1905 Prime Minister's Resignation Honours were awards announced on 9 December 1905 to mark the exit of Prime Minister Arthur James Balfour, who resigned on 5 December.