Thookku Thookki (transl. Baggage carrier) is a 1954 Indian Tamil-language historical drama film directed by R. M. Krishnaswami. Based on the play of the same name by Udumalai Narayana Kavi, it stars Sivaji Ganesan, Lalitha and Padmini. The film revolves around a prince who, after hearing about the five maxims of life, goes through numerous adventures to evaluate their validity.

Thookku Thookki is the second film adaptation of the play, following a 1935 film. It was released on 26 August 1954 and became a success, besides winning two Chennai Film Fans' Association awards: Best Film, and Best Actor (Ganesan).

The king of Sundarapuri advises his three sons to get into business and earn money to save the crippling economy. Sundarangathan is the brightest son while the other two are dimwitted. Hence, the king looks up to him for support to save the country. All the three brothers venture out of their country to do business.

Sundarangathan visits a research centre and listens to the words of pandits. One of them reads out the five maxims of life:

Sundarangathan is sceptical, and argues with the pandits before deciding to evaluate their validity. Instead of pursuing his business goal, Sundarangathan returns to Sundarapuri to verify the merits of the maxims, but his father again sends him away and prohibits him from returning without riches, convincing Sundarangathan that the first maxim is true.

Sundarangathan visits his mother who warmly welcomes him and is upset to know the reaction of his father. She offers him protection, advises him to stay back in the palace and promises that she will pacify the king. Sundarangathan refuses, but realises the second maxim is true.

Sundarangathan goes to his sister's country. His sister and her husband welcome him warmly. However, on realising that he did not bring any gifts or riches for her, she feels humiliated and disrespects him. Sundarangathan is forced to leave, but realises the third maxim is true.

Sundarangathan meets his wife Prema, who stayed back in her father's kingdom Sorgapuri as Sundarangathan was regularly travelling outside his kingdom. Sundarangathan is not aware that Prema is having an extramarital affair with Seth Namakharam, and is staying back in the place for this reason. Madhivanan, son of the minister and a friend of Sundarangathan, learns of the affair and visits Prema's palace twice to verify the same. However, she lies to Sundarangathan that Madhivanan is misbehaving by coming to her place regularly, misusing his friendship.

Prema lies to her father that Sundarangathan attempted to kill her. Sundarangathan, accused of attempted murder, flees to another kingdom where he feigns insanity. However, he attracts the attention of princess Madhavi, who likes his behaviour and arranges for his treatment. When he is "cured", she makes him her and her sister Mallika's baggage carrier. Kattazhagan, their teacher's son, falls in love with Madhavi and demands that she should marry him. Sundarangathan comes to her rescue. The king learns that Sundarangathan is not insane, and that he is the prince of Sundarapuri who is banned there. He arrests Sundarangathan, but after Madhavi pleads, agrees to release him if his innocence is proven.

Thookku Thookki was an adaptation of the play of the same name by Udumalai Narayana Kavi which was previously made into a film in 1935. [4] [5] [6] The film was directed by R. M. Krishnaswami, who also handled the cinematography, and produced by M. Radhakrishnan. The dialogue was written by A. T. Krishnasamy and V. N. Sambandham. Editing was handled by R. M. Venugopal. [7]

The music was composed by G. Ramanathan, with lyrics by Udumalai Narayana Kavi, Thanjai N. Ramaiah Dass and A. Maruthakasi. [3] In less than 12 hours, Narayana Kavi wrote five of the eight songs, which were composed immediately by Ramanathan and rehearsed by the playback singers. [4] T. M. Soundararajan was hired to sing the songs picturised on Ganesan at Maruthakasi's recommendation, [8] with his salary being ₹2,000 (equivalent to ₹170,000orUS$2,100 in 2020). Ganesan objected to Soundararajan and wanted his usual singer C. S. Jayaraman instead, but Soundararajan persuaded Ganesan to let him render the songs, and he would leave if Ganesan was not satisfied. After hearing Soundararajan's rendering, Ganesan was impressed and Soundararajan went on to sing many songs for Ganesan. [9] The song "Sundari Soundari" is set in the Carnatic raga known as Kurinji, [10] [11] and "Pengalai Nambaadhe Kangale" is set in Maand. [12] 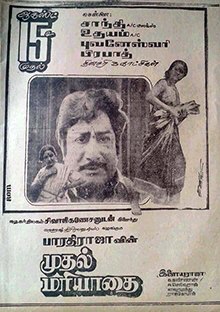 Muthal Mariyathai is a 1985 Indian Tamil-language romantic drama film produced, directed and co-written by Bharathiraja. The film stars Sivaji Ganesan and Radha, with Vadivukkarasi, newcomers Deepan and Ranjini, Janagaraj, Sathyaraj, Aruna, Veerasami and Ramanathan in supporting roles. It revolves around the relationship between an unhappily married village chief and a young boatwoman. 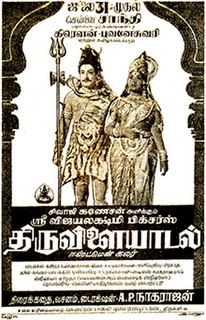 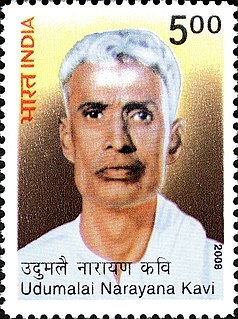 Pattikada Pattanama is a 1972 Indian Tamil-language romantic comedy film produced and directed by P. Madhavan and written by Bala Murugan. The film stars Sivaji Ganesan and Jayalalithaa. The film deals with Kalpana, an urban woman who marries a villager Mookaiyan. After marriage, differences of opinion arise between the couple as Mookaiyan raises objections about city culture, leading to their separation. The rest of the film is whether Kalpana reforms and the couple reunite or not. 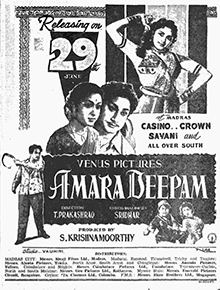 Amara Deepam is a 1956 Indian Tamil-language romantic drama film directed by T. Prakash Rao. A remake of the 1942 American film Random Harvest, it stars Sivaji Ganesan, Savitri and Padmini. The film, produced by Venus Pictures, was released on 29 June 1956. It was remade in Hindi as Amardeep (1958). 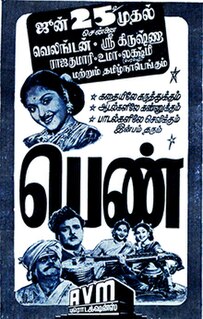 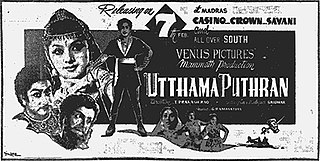 Uthama Puthiran is a 1958 Indian Tamil-language historical action film directed by T. Prakash Rao. Co-produced by C. V. Sridhar, who also wrote the screenplay, the film stars Sivaji Ganesan and Padmini, with M. K. Radha, M. N. Nambiar, K. A. Thangavelu, Ragini and Kannamba in supporting roles. It revolves around twins who are separated at birth; one grows up as a kind and honest man, while the other grows up as a greedy and arrogant man.

Poompuhar is a 1964 Indian Tamil-language epic film directed by P. Neelakantan. It is the second film based on the epic Cilappatikaram after Kannagi (1942). The film stars S. S. Rajendran, C. R. Vijayakumari, Rajasree and K. B. Sundarambal. It was released on 18 September 1964. 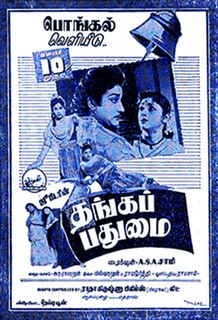 Thanga Padhumai is a 1959 Indian Tamil language film starring Sivaji Ganesan and Padmini. The film was co-written and directed by A. S. A. Samy, produced by M. Somasundaram under Jupiter Pictures, and musical score by Viswanathan–Ramamoorthy. Thanga Pathumai proved to be a hit in its re-release, and won National Film Award for Best Feature Film in Tamil for the year 1959. 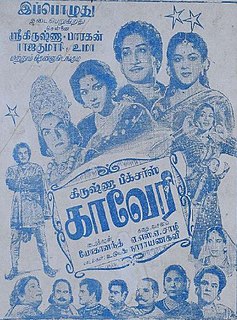 Kaveri is a 1955 Indian Tamil-language film directed by D. Yoganand, produced by Lena Chettiar and written by A. S. A. Sami. The film stars Sivaji Ganesan, Padmini and Lalitha. It was released in 1955. 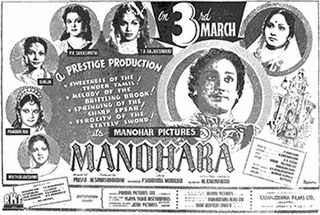 Manohara is a 1954 Indian Tamil-language historical fantasy film directed by L. V. Prasad and written by M. Karunanidhi. Starring Sivaji Ganesan, T. R. Rajakumari, P. Kannamba and Girija, the film was based on the play of the same name by Pammal Sambandha Mudaliar. It was released on 3 March 1954. The film was later shot in Telugu and Hindi and released on 3 June 1954.

Iru Malargal is a 1967 Indian Tamil-language romantic drama film directed by A. C. Tirulogchander. The film stars Sivaji Ganesan, Padmini and K. R. Vijaya, with Nagesh, S. A. Ashokan, V. Nagayya, Manorama and Roja Ramani in supporting roles. It revolves around a man who faces upheavals in his life as he is caught between his lady-love and his devoted wife. 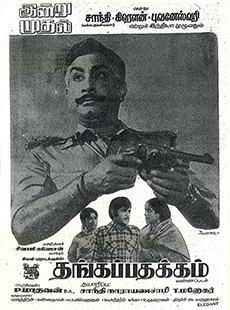 Thangappathakkam is a 1974 Indian Tamil-language action drama film, directed by P. Madhavan and written by Mahendran. Based on Mahendran's play of the same name, the film stars Sivaji Ganesan, K. R. Vijaya, Srikanth and Prameela. It focuses on a disciplined Superintendent of Police who is dedicated to his job, while his son, on the contrary, is rebellious by nature and grows to resent his father. Ganesan reprises his role from the play. 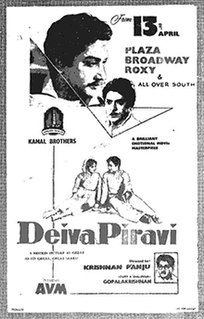 Deivapiravi is a 1960 Indian Tamil-language film, directed by Krishnan–Panju. The film stars Sivaji Ganesan, Padmini, S. S. Rajendran, K. A. Thangavelu and M. N. Rajam. The film had musical score by R. Sudarsanam. The film was dubbed and released in Telugu as Anumanam and released on 24 June 1961. At the 8th National Film Awards, the film won the All India Certificate of Merit for the Third Best Feature Film. It was remade the same year in Hindi as Bindiya, and in 1965 in Sinhala as Sekaya. 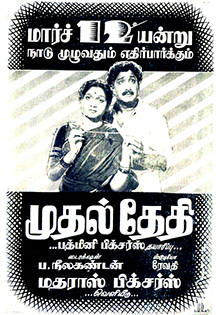 Mudhal Thethi in Tamil, Modala Thedi in Kannada is an Indian bilingual film, directed by P. Neelakantan and produced by B. R. Panthulu. This was the first film produced by Panthulu under Padmini Pictures banner. The Tamil version starred Sivaji Ganesan, Anjali Devi, N. S. Krishnan and T. A. Madhuram in lead roles. The film had musical score by T. G. Lingappa scoring for his first feature film. The film was a remake of Hindi film Paheli Tarikh (1954). 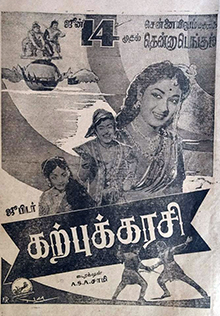 Karpukkarasi is a 1957 Indian Tamil-language swashbuckler film directed by A. S. A. Sami and produced by M. Somasundaram under Jupiter Pictures. The story and screenplay were written by A. S. A. Sami and Aru. Ramanathan. The dialogues were written by Siva Sundaram. The film stars Gemini Ganesan, M. N. Nambiar, R. Balasubramaniam, and K. A. Thangavelu, with G. Varalakshmi, M. K. Radha, Savitri E. V. Saroja and M. Saroja in supporting roles. 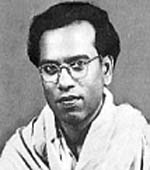 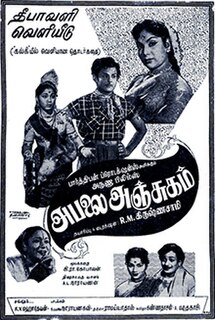 Abalai Anjugam is a 1959 Indian Tamil-language film produced and directed by R. M. Krishnaswamy. The film, based on the short story of the same name by Ki. Ra. Gopalan, stars T. R. Mahalingam and Sowkar Janaki.