Thorn Hill is an unincorporated community in rural northeastern Grainger County, Tennessee. [3] It is part of the Morristown Metropolitan Statistical Area which consists of Grainger, Hamblen, and Jefferson counties.

In 1901 in Thorn Hill, a four-year conflict between two families, known locally as "The Battle of Thorn Hill," began following the murder of a prominent resident. [4] The feud fueled acts of violence such as assassinations of prominent citizens and ended with a 4 man shootout at a local business. [4]

In 1976, construction on the widening of US 25E into a four-lane limited-access highway from Thorn Hill across Clinch Mountain to Bean Station would begin, and it would complete construction in 1980. During the project, Tennessee Department of Transportation officials faced multiple landslides impeding the project's process. [5]

Thorn Hill is located in the central northeastern corner of Grainger County. It is situated adjacent to the intersection of U.S. Route 25E, and Tennessee State Route 131. Clinch Mountain and adjacent ridges in the Clinch River Valley rise prominently to the south and north of Thorn Hill respectively. [6]

From the early 1940s to the late 2000s, Thorn Hill was the location of the Imperial Black Marble Quarry, which mined Tennessee marble. The black marble extracted from the mine was used in the Tennessee State Capitol, Knox County Courthouse, National Archives Building, and the Washington Monument. [7] In 2007, the mine was purchased by the Tennessee Marble Company, with no immediate plans to reopen the facility. [7]

Thorn Hill is the also the site of the Clinch Valley Zinc Deposit, which is part of the larger Copper Ridge Zinc Mining District. [8] The zinc deposit was first reported to be discovered around 1950 and mining operations began in 1977. [9]

Thorn Hill does not have a school located in the community. Students must attend school at either Washburn School (K-12), Bean Station Elementary School (K-6), Rutledge Middle School (7-8), or Grainger High School (9-12), all of which are a part of the Grainger County Schools district serviced by the Grainger County Board of Education. 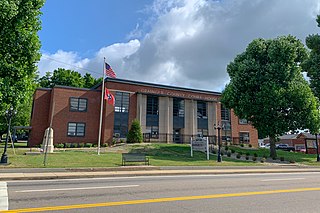 Grainger County is a county located in the U.S. state of Tennessee. As of the 2010 census, the population was 22,657. Its county seat is Rutledge.

Rutledge is a city in and the county seat of Grainger County, Tennessee. The city is part of both the Knoxville metropolitan area and the Morristown metropolitan area. As of the 2010 census, the city had a total population of 1,122, a decrease of 65 from 2000.

Sphalerite is a sulfide mineral with the chemical formula (Zn,Fe)S. It is the most important ore of zinc. Sphalerite is found in a variety of deposit types, but it is primarily in sedimentary exhalative, Mississippi-Valley type, and volcanogenic massive sulfide deposits. It is found in association with galena, chalcopyrite, pyrite, calcite, dolomite, quartz, rhodochrosite, and fluorite. 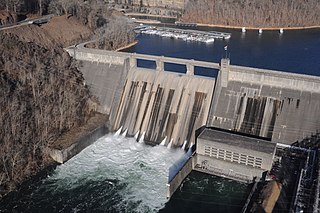 Norris Dam is a hydroelectric and flood control structure located on the Clinch River in Anderson County and Campbell County, Tennessee, United States. The dam was the first major project for the Tennessee Valley Authority, which had been created in 1933 to bring economic development to the region and control the rampant flooding that had long plagued the Tennessee Valley. The dam was named in honor of Nebraska Senator George Norris (1861–1944), a longtime supporter of government-owned utilities in general, and supporter of TVA in particular. The infrastructure project was listed on the National Register of Historic Places in 2016.

The Driftless Area, a region in the American Midwest, comprises southwestern Wisconsin, southeastern Minnesota, northeastern Iowa, and the extreme northwestern corner of Illinois. It was never covered by ice during the last ice age, and therefore lacks glacial deposits, also termed drift. Its landscape is characterized by steep hills, forested ridges, deeply carved river valleys, and karst geology with spring-fed waterfalls and cold-water trout streams. Ecologically, the Driftless Area's flora and fauna are more closely related to those of the Great Lakes region and New England than those of the broader Midwest and central Plains regions. The steep riverine landscape of both the Driftless Area proper and the surrounding Driftless-like region are the result of early glacial advances that forced preglacial rivers that flowed into the Great Lakes southward, causing them to carve a gorge across bedrock cuestas, thereby forming the modern incised upper Mississippi River valley. The region has elevations ranging from 603 to 1,719 feet at Blue Mound State Park, and together with the Driftless-like region, covers 24,000 square miles (62,200 km2). 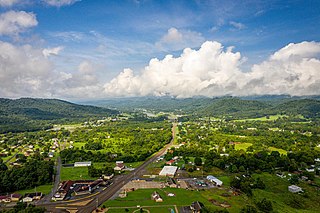 Bean Station is a town in Grainger and Hawkins counties in the state of Tennessee, United States. As of the 2020 census, the population was 2,967.

The Southeast Missouri Lead District, commonly called the Lead Belt, is a lead mining district in the southeastern part of Missouri. Counties in the Lead Belt include Saint Francois; Crawford; Dent; Iron; Madison: Reynolds; and Washington. Philip Francois Renault of France led a large exploratory mission in 1719 and started mining operations in Old Mines and Mine La Motte in 1720. The town of Sainte Genevieve was founded as a river port for transportation of lead out of the area. Moses Austin started large-scale mining and smelting at Potosi, originally known as Mine a Breton, and founded Herculaneum as his shipping point on the Mississippi. This lead was originally used as a roofing material. Bonne Terre has large subterranean mines, now used commercially for recreational scuba diving.

Clinch Mountain is a mountain ridge in the U.S. states of Tennessee and Virginia, lying in the ridge-and-valley section of the Appalachian Mountains. From its southern terminus at Kitts Point, which lies at the intersection of Knox, Union and Grainger counties near Blaine, Tennessee, it runs in a generally east-northeasterly direction to Garden Mountain near Burke's Garden, Virginia. It separates the Clinch River basin, to the north, and the Holston River basin, to the south.

New Jersey is a very geologically and geographically diverse region in the United States' Middle Atlantic region, offering variety from the Appalachian Mountains and the Highlands in the state's northwest, to the Atlantic Coastal Plain region that encompasses both the Pine Barrens and the Jersey Shore. The state's geological features have impacted the course of settlement, development, commerce and industry over the past four centuries. 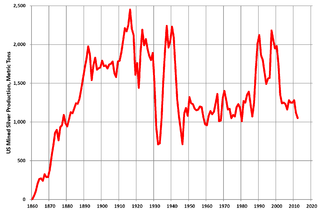 Loyston is a ghost town in Union County, Tennessee, United States, that was inundated by the waters of the Clinch River after the completion of Norris Dam in 1936. Established in the early 19th century around a foundry built by its namesake, John Loy, over subsequent decades the community's location along State Highway 61 helped it grow into a trading center for local farmers. By the time the Tennessee Valley Authority (TVA) began making plans to build Norris Dam in the early 1930s, Loyston had a population of approximately 70 residents, and consisted of a post office and several small businesses.

Joppa is an unincorporated community in rural central-western Grainger County, Tennessee, United States. It rests below Joppa Mountain, a subrange located near the southern terminus of the 150 mile (240 km) long Clinch Mountain ridge complex, offering views of five U.S. States and the Great Smoky Mountains. Joppa is part of the Morristown, Tennessee Metropolitan Statistical Area, and also a component of the Knoxville-Morristown-Sevierville Combined Statistical Area.

Embreeville is an unincorporated community in southern Washington County, Tennessee. It is located along the Nolichucky River and on State Routes 81 and 107.

The Shady Dolomite is a geologic formation composed of marine sedimentary rocks of early Cambrian age. It outcrops along the eastern margin of the Blue Ridge province in the southeastern United States and can be found in outcrops in the states of Alabama, Georgia, Tennessee, North Carolina, and Virginia. It is also can be found in the subsurface of Kentucky, Ohio, and West Virginia. The Shady is predominantly composed of dolostone and limestone with lesser amounts of mudrock. It contains fossils of trilobites, archaeocyathids, algae, brachiopods, and echinoderms, along with the enigmatic fossil Salterella. The Shady Dolomite was first described by Arthur Keith in 1903 and was named for exposures in the Shady Valley of Johnson County in the state of Tennessee. Near Austinville, Virginia, the Shady hosts ore deposits that have been mined extensively for lead and zinc ore.

Zinc mining in the United States produced 780,000 tonnes of zinc in 2019, making it the world's fourth-largest zinc producer, after China, Australia, and Peru. Most US zinc came from the Red Dog mine in Alaska. The industry employed about 2,500 in mining and milling, and 250 in smelting.

The Copper Basin, also known as the Ducktown Basin, is a geological region located primarily in Polk County, Tennessee that contains deposits of copper ore and covers approximately 60,000 acres. Located in the southeastern corner of Tennessee, small portions of the basin extend into Fannin County, Georgia and Cherokee County, North Carolina. The basin is surrounded by the Cherokee National Forest and the cities of Ducktown and Copperhill, Tennessee and McCaysville, Georgia are located in the basin.