Detroit Catholic Central High School, commonly known as Catholic Central (CC), is a private, Catholic, all-male, college preparatory high school in Novi, Michigan, United States. Founded in 1928 in Detroit, Michigan by the Archdiocese of Detroit, the school is operated by the Congregation of St. Basil. 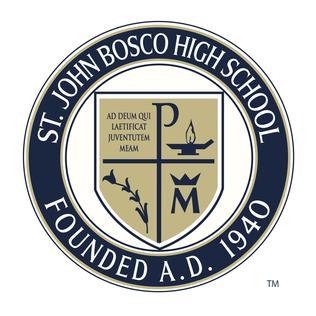 St. John Bosco High School (SJBHS) is a Catholic, all-male college preparatory high school located in Bellflower, California, and conducted by the San Francisco Province of the Salesians of St. John Bosco. St. John Bosco High School is named after Saint John Bosco, an Italian saint known for his dedication to educating and advocating for youth and for his "Home-School-Church-Playground" model of education. Bosco was founded as an elementary and intermediate boarding school in 1940. The first high school class graduated in 1956, and in 1979 the boarding school closed.

Joliet Catholic Academy is a coed Catholic High School located in Joliet, Illinois. It is located in the Roman Catholic Diocese of Joliet. One of the oldest Catholic high schools in the Chicago area, Joliet Catholic is perhaps best known for its prowess in football. Since the advent of the Illinois High School Association (IHSA) state football playoffs in 1974, JCA has won more state football titles than any other team in the state, with 15 as of 11/26/2021.

Argo Community High School is a public four-year high school located in Summit, Illinois, a western suburb of Chicago. The district draws students from the communities of Summit, Bedford Park, Bridgeview, Justice, Willow Springs, and a portion of Hickory Hills. The school was named for the area surrounding the large corn processing plant located near the school, which manufactured Argo corn starch and is currently owned by Ingredion. In 2014 and 2016, Argo was awarded a bronze medal by U.S. News & World Report for outstanding academic performance, the only school in the South Suburban Conference to receive such recognition.

Lafayette High School, located in Wildwood, Missouri, is a secondary school in the Rockwood School District.