Thorpe is a village and civil parish in the English county of Derbyshire; it is on the Derbyshire/Staffordshire border, on the east bank of the River Dove, about four miles north of Ashbourne. The population of the civil parish as at the 2011 census was 183. [1]

Thorpe is at the southern end of the Peak District National Park almost at the foot of Thorpe Cloud, and is used by some visitors as a base for exploring Dovedale and the Manifold Valley.[ citation needed ] The Limestone Way long-distance bridleway passes through Thorpe, [2] as does the Peak District Boundary Walk. [3]

It formerly had a railway station, Thorpe Cloud railway station, served by the LNWR Ashbourne to Buxton branch line, which linked with the Cromford and High Peak Railway at Parsley Hay. This former trackbed now forms the long distance Tissington Trail cycle and footpath trail. There is a small car park at the station site, and some walkers/cyclists leave the trail at this point to visit Dovedale or the nearby village of Ilam.[ citation needed ]

Ashbourne is a market town in the Derbyshire Dales, England, with a population of 8,377 in the 2011 census. It contains many historical buildings and independently owned shops, and offers a historic annual Shrovetide football match. Its position near the southern edge of the Peak District makes it the closest town to Dovedale, to which it is sometimes referred as the "gateway".

The White Peak, also known as the Low Peak, is a limestone plateau that forms the central and southern part of the Peak District in England. It is mostly between 270 metres (900 ft) and 430 metres (1,400 ft) above sea-level and is enclosed by the higher altitude Dark Peak to the west, north and east.

Hartington is a village in the Derbyshire Peak District, England, lying on the River Dove close to the Staffordshire border. According to the 2001 census, the parish of Hartington Town Quarter, which also includes Pilsbury, had a population of 345 reducing to 332 at the 2011 Census. Formerly known for cheese-making and the mining of ironstone, limestone and lead, the village is now popular with tourists. 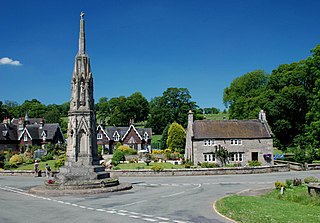 Ilam is a village in the Staffordshire Peak District of England, lying on the River Manifold. The population of the civil parish as taken at the 2011 census was 402. 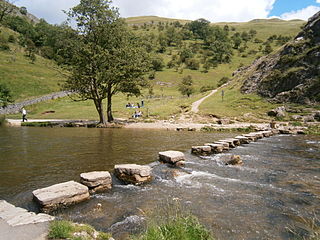 The River Dove is the principal river of the southwestern Peak District, in the Midlands of England and is around 45 miles (72 km) in length. It rises on Axe Edge Moor near Buxton and flows generally south to its confluence with the River Trent at Newton Solney. From there, its waters reach the North Sea via the Humber Estuary. For almost its entire course it forms the boundary between the counties of Staffordshire and Derbyshire. The river meanders past Longnor and Hartington and cuts through a set of stunning limestone gorges, Beresford Dale, Wolfscote Dale, Milldale and Dovedale. 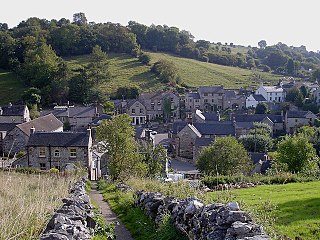 Bonsall is a village and civil parish in the Derbyshire Dales on the edge of the Peak District. The civil parish population, including Brightgate and Horse Dale, was 775 at the 2001 Census, increasing to 803 at the 2011 Census. 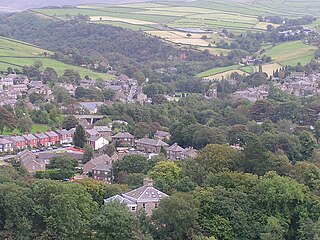 Peak Forest is a small village and civil parish on the main road the (A623) from Chapel-en-le-Frith to Chesterfield in Derbyshire. The population of the civil parish at the 2011 census was 335.

The Limestone Way is a waymarked long-distance footpath in Derbyshire, England. It runs for 46 miles (74 km) through the White Peak of the Peak District National Park, from Castleton south to Rocester over the county boundary into Staffordshire. It originally ran to Matlock, but was extended to its current, longer route in 1992 to join up with the Staffordshire Way. The trail is named for the limestone scenery along its route. It was created by the West Derbyshire District Council.

Great Longstone with Little Longstone is one of two villages in the local government district of Derbyshire Dales in Derbyshire, England. The population as taken at the 2011 Census was 843. 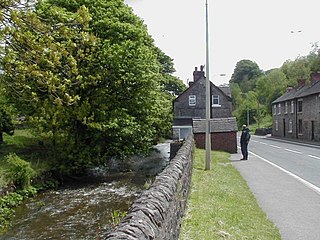 Waterhouses is a village in the south of the Staffordshire Peak District in England. It is around 8 miles from Leek and Ashbourne, being nearly the halfway point between the two towns on the A523 road, which roughly follows the southern boundary of the Peak District National Park. Waterhouses is also a civil parish, created in 1934 when the parishes of Calton, Cauldon, Waterfall and part of Ilam were merged; previously the village of Waterhouses was on the boundary of Waterfall and Cauldon parishes. The hamlet of Winkhill is also in the parish. The population of the civil parish at the 2011 census was 1,134.

Wormhill is a village and civil parish in the High Peak district of Derbyshire, England, situated east by north of Buxton. The population of the civil parish including Peak Dale was 1,020 at the 2011 Census.

Alsop en le Dale is a village in Derbyshire, England about 5 miles (8.0 km) north of Ashbourne close to the Staffordshire border, and a mile from Dovedale, a popular tourist location. 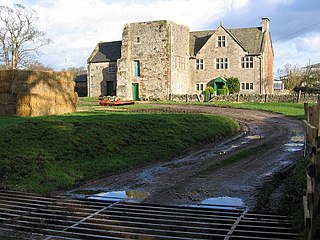 Fenny Bentley is a small village and civil parish located close to Dovedale in the Derbyshire Dales district of Derbyshire, England. The population in 2009 was 305 reducing to 183 at the 2011 Census. It lies two miles north of Ashbourne, on the A515 Buxton to Ashbourne Road. It is the most southerly village in the Peak District.

Parwich is a village and parish in the Derbyshire Dales, 7 miles north of Ashbourne. In the 2011 census the population of the civil parish was 472.

Nether Haddon is a sparsely populated village and civil parish in Derbyshire, England. It is immediately downstream along the River Wye from the small town of Bakewell and much of its land is owned by Haddon Hall, a medieval and Tudor building largely rendered in stone. The population of the village is included in the civil parish of Over Haddon.