Threapland is a hamlet in the Allerdale district, in the county of Cumbria, England. Nearby settlements include the village of Bothel and the village of Plumbland. 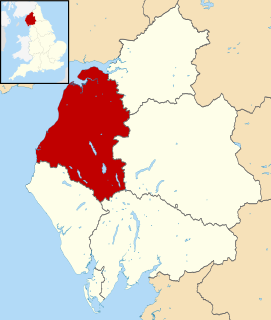 Allerdale is a non-metropolitan district of Cumbria, England, with borough status. Its council is based in Workington and the borough has a population of 93,492 according to the 2001 census, increasing to 96,422 at the 2011 Census. 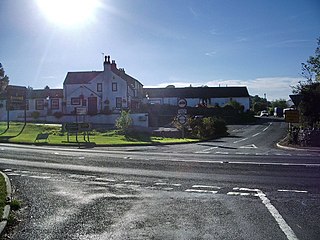 Bothel is a municipality in the district of Rotenburg, Germany in the Stade Geest region of central Lower Saxony. It has 2,500 inhabitants. Bothel was founded by workers of the nearby Trochel Forest. The name developed from Borstel which is Old Saxon and means "little woods".

Cumberland sausage is a form of sausage that originated in the ancient county of Cumberland, England, now part of Cumbria. They are traditionally very long, up to 21 inches, and sold rolled in a flat, circular coil, but within western Cumbria, they are more often served in long, curved lengths.

Binsey is a hill on the northern edge of the Lake District in Cumbria, England. It is detached from the rest of the Lakeland hills, and thus provides a good spot to look out at the Northern and North Western Fells of the Lake District, as well as the coastal plain and, across the Solway Firth, Scotland. Snaefell on The Isle of Man is also visible on a clear day. It is the northernmost of the Wainwrights. 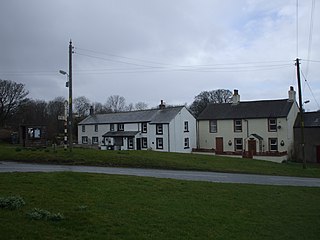 Bothel is a Samtgemeinde in the district of Rotenburg, in Lower Saxony, Germany. Its seat is in the village Bothel.

Papcastle is a village and civil parish in the borough of Allerdale in the English county of Cumbria. The village is now effectively a northern extension of Cockermouth, which lies to the south of the River Derwent. It has its own parish council and lies within Bridekirk Parish for Church of England purposes. In 2001 it had a population of 406, reducing to 385 at the 2011 Census.

Caer Mote is a small hill in the north of the English Lake District near Bothel, Cumbria. Its summit at 920 feet (280 m) lies just outside the boundary of the Lake District National Park. It offers a view of Bassenthwaite Lake from its summit, upon which is an ancient earthwork enclosure of undetermined age, known as "The Battery". Under the name Caermote Hill it is the subject of a chapter of Wainwright's book The Outlying Fells of Lakeland. Wainwright's route is an ascent from Bothel via the northern summit St. John's Hill at 935 feet (285 m) in an anticlockwise circuit.

Gilcrux is a small village and civil parish in the Ceremonial County of Cumbria, England. Formerly part of Cockermouth Rural District Gilcrux is now part of the Borough of Allerdale. The village is on the south bank of the River Ellen around 5 miles (8 km) north of Cockermouth and around 37 kilometres (23 mi) southwest of Carlisle the County town of Cumbria. An early record of the village is shown on a map of the Cumbria area by Christopher Saxton in 1567, in which the village is known as Gilcrosse.

Rob Miller is an English rugby union player for Wasps. He plays at Full-back. Miller was brought up in Bothel, Cumbria.

Sunderland is a hamlet within the Lake District National Park, in the parish of Blindcrake in the Allerdale district of the county of Cumbria, England.

The Cumberland was a breed of domestic pig that originated in the North of England; it was used to produce local delicacies like the Cumberland sausage and Cumberland ham. The breed became extinct in 1960, after changes in farming methods and a demand for less fatty meat led to it falling out of favour.

Plumbland is a village and civil parish in the Allerdale district in the county of Cumbria, England. Situated towards the north west corner of the county, it is only a 2-mile journey to reach the outskirts of the Lake District National Park which is considered to be an Area of Outstanding Natural Beauty. The parish includes the hamlets of Threapland, Parsonby and Arkleby. 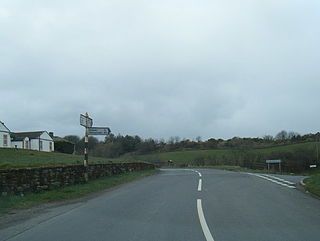 Plumbland is a civil parish in the Borough of Allerdale in Cumbria, England. It contains eleven listed buildings that are recorded in the National Heritage List for England. Of these, one is listed at Grade II*, the middle of the three grades, and the others are at Grade II, the lowest grade. The parish contains the village of Plumbland and the settlements of Threapland, Parsonby and Arkleby, and is otherwise rural. The listed buildings include houses and associated structures, a church, a dovecote, a bridge, a farmhouse, and a school later used as a village hall.