"Three Little Fishies", also known as "Three Little Fishes", is a 1939 song with words by Josephine Carringer and Bernice Idins and music by Saxie Dowell. The song tells the story of three fishes, who defy their mother's command of swimming only in a meadow, by swimming over a dam and on out to sea, where they encounter a shark, which the fish describe as a whale. They flee for their lives and return to the meadow in safety. 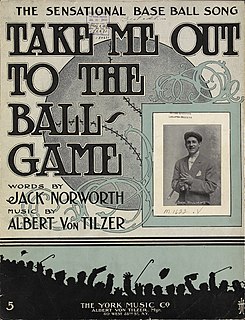 "Take Me Out to the Ball Game" is a 1908 Tin Pan Alley song by Jack Norworth and Albert Von Tilzer which has become the official anthem of North American baseball, although neither of its authors had attended a game prior to writing the song. The song's chorus is traditionally sung during the middle of the seventh inning of a baseball game. Fans are generally encouraged to sing along, and at most ballparks, the words "home team" are replaced with the home team's name. 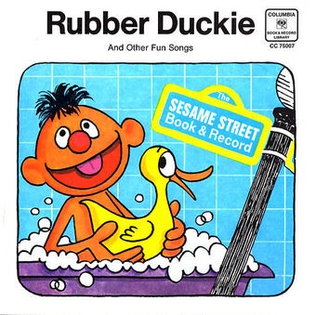 "Rubber Duckie" is a song sung by the Muppet character Ernie on Sesame Street. The song is named after Ernie's toy, a rubber duck affectionately named Rubber Duckie.

"Mah Nà Mah Nà" is a popular song by Italian composer Piero Umiliani. It originally appeared in the Italian film Sweden: Heaven and Hell. It was a minor radio hit in the U.S. and in Britain, but became better known internationally for its use by The Muppets and on The Benny Hill Show.

Kidsongs is an American children's media franchise that includes Kidsongs Music Video Stories on DVD and video, The Kidsongs TV Show, CDs of favorite children's songs, song books, sheet music, toys and an ecommerce website. It was created by producer/writer Carol Rosenstein and director Bruce Gowers of Together Again Video Productions (TAVP), both of whom are music video and television production veterans. The duo had produced and directed over 100 music videos for Warner Records (WBR) and took their idea of music videos for children to the record label. Warner Brothers funded the first video, "A Day at Old MacDonald's Farm". Shortly thereafter, a three way partnership between TAVP, WBR and View-Master Video was formed with TAVP being responsible for production and WBR and View-Master responsible for distribution to video and music stores, and toy stores respectively.

"Polly Wolly Doodle" is a traditional American children's song. It was sung by Dan Emmett's Virginia Minstrels, who premiered at New York's Bowery Amphitheatre in February 1843, and is often credited to Emmett (1815–1904).

"Side by Side" is a popular song by Harry M. Woods written in 1927, and is now considered a standard.

"The Army Goes Rolling Along" is the official song of the United States Army and is typically called "The Army Song". It is adapted from an earlier work titled the "U.S. Field Artillery March".

David Rudman is an American puppeteer, puppet builder, writer, director, and producer known for his involvement with the Muppets and Sesame Street.

"Boogie Woogie Bugle Boy" is a World War II jump blues song written by Don Raye and Hughie Prince which was introduced by The Andrews Sisters in the Abbott and Costello comedy film Buck Privates (1941). The Andrews Sisters' Decca recording reached number six on the U.S. pop singles chart in the spring of 1941 when the film was in release. The song is ranked No. 6 on Songs of the Century. Bette Midler's 1972 recording of the song also reached the top ten on the U.S. Billboard Hot 100. 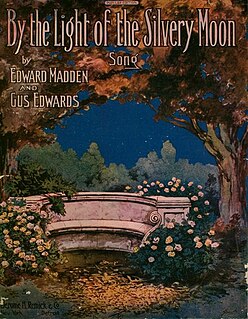 "By The Light of the Silvery Moon" or "By the Light of the Silv'ry Moon" is a popular song. The music was written by Gus Edwards, and the lyrics by Edward Madden. The song was published in 1909 and first performed on stage by Lillian Lorraine in the Ziegfeld Follies of 1909. It was one of a series of moon-related Tin Pan Alley songs of the era. The song was also used in the short-lived Broadway show Miss Innocence when it was sung by Frances Farr.

"Don't Fence Me In" is a popular American song written in 1934, with music by Cole Porter and lyrics by Robert Fletcher and Cole Porter. Members of the Western Writers of America chose it as one of the Top 100 Western songs of all time.

"Yes! We Have No Bananas" is an American novelty song by Frank Silver and Irving Cohn published March 23, 1923. It became a major hit in 1923 when it was recorded by Billy Jones, Billy Murray, Arthur Hall, Irving Kaufman, and others. It was recorded later by Benny Goodman and His Orchestra, Spike Jones & His City Slickers, Kidsongs, and many more. 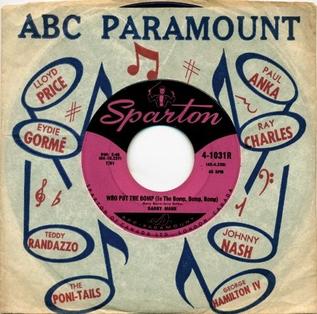 "Who Put the Bomp " is a doo-wop style novelty song from 1961 co-written and recorded by Barry Mann. It was originally released as a single on the ABC-Paramount label (10237).

"The Lonely Goatherd" is a popular show tune from the 1959 Rodgers and Hammerstein musical The Sound of Music.

"Talk to the Animals" is a song written by British composer Leslie Bricusse.

"Shortnin' Bread" is an African-American folk song dating back at least to the 1890s. James Whitcomb Riley published a poem building on older lyrics in 1900. A "collected" version was published by E. C. Perrow in 1915. It is song number 4209 in the Roud Folk Song Index.

"Baby Face" is a popular song. The music was written by Harry Akst, with lyrics by Benny Davis, and the song was published in 1926. That same year, Jan Garber had a number one hit with the song.