Last updated April 15, 2021
This article is about the island on Lake Winnipesaukee in New Hampshire. For the island on the Susquehanna River in Pennsylvania, see Three Mile Island Nuclear Generating Station.

Three Mile Island is an island on Lake Winnipesaukee in New Hampshire, located three miles from the town of Center Harbor. It has been owned by the Appalachian Mountain Club (AMC) since 1900 and is run as a full-service camp during the summer.

Three Mile Island covers an area of 43 acres (17 ha) and is approximately 0.5 miles (0.8 km) long, 0.25 miles (0.4 km) wide, and 1 mile (1.6 km) around. The highest point on the island, a ridge running north to south, is between 50 feet (15 m) and 60 feet (18 m) above the water line. The shoreline is mostly stone, although there are at least three small sandy beaches. There are no major bodies of water on the island, although there are 5 swamps—the largest being the Rhododendron Swamp. There are three smaller uninhabited islands within 300 feet (90 m) of Three Mile: Hawk's Nest Island, Rock Island, and Nabby Island. [1]

Flora on the island is typical of the region: a mix of deciduous and evergreen trees, including maple, pine, oak, and witch-hazel, and a mix of ground plants, including Canada mayflower, sheep laurel, iris, pink lady's slipper, and the endangered ram's-head lady's slipper. [2] Wild blackberries, blueberries, and huckleberries can also be found on the island. Fauna includes a number of water birds, including ducks, Canada geese, and loons, bats, rodents such as squirrels, chipmunks, and mink, and the occasional large mammal such as deer or moose that either walk to the island while the lake is frozen or swim over after it has thawed. [3]

The AMC acquired the island through a combination of donations and purchases between 1899 and 1900, [4] and currently runs a full-service family camp on the island. Campers stay in one of the 47 16-foot cabins or 5 wood-framed tents for one or two weeks during the 9-week summer season. [5] Each cabin features two beds and a private dock, but do not have electricity or running water. [6] A limited number of the closer cabins are available for four fall weekends, and other programs such as a music camp and yoga retreat are also held on the island. [7] [8]

During the summer weeks three meals a day are provided, as are a variety of activities and programs. Hiking trails, tennis and volleyball courts, and several public buildings are available to campers free of charge, and sailboats and canoes are available for a nominal fee. [9] Only four of the camper-used buildings on the island have electricity: the central lodge where meals are served, the recreational hall on the main dock, the changing facilities on the main dock, and the quiet Retreat reading room. [10] Only the lodge and changing rooms have running water. There are no flush toilets on the island, although there are several outhouses, including two composting outhouses from Clivus Multrum. Access to the island is by boat, either a private vessel or the launch run by the camp, which operates three times a day during the summer. Typical daily activities include exploration of the woods, swimming, boating, conservation programs, crafts, and relaxation. [9] [10] Electronics, including cell phones and laptops, are not allowed in any public areas. [10] [6]

During its 100-plus-year history, several traditions have evolved on the island. Every morning, campers are woken to reveille played on the bugle. First Call is played to signal campers to the main lodge for meals, although tradition calls for campers not to sit until the Mess Call is played signaling the start of the meal. [10] During the summer weeks, a Town Meeting is held on the Saturday night that campers arrive, where the camp manager will go over the island's policies and schedule, and where the camp's college-aged "croo" introduce themselves. [10] On Sunday nights, the camp holds a "Sunday Sing", in which the croo (dressed in all white) and the campers sing a variety of religious and secular songs, ending with the playing of taps on the bugle. A square dance and a talent show are also held during the week. [10] Mail is delivered to the island every day but Sunday at noon by the M/V Sophie C during the summer and early fall weekends, and campers will often gather on the dock at this time to purchase ice cream and snacks from the boat. [11] [12]

Three Mile Island was named the Best Family Camp in New Hampshire by Yankee magazine in 2014. [13] 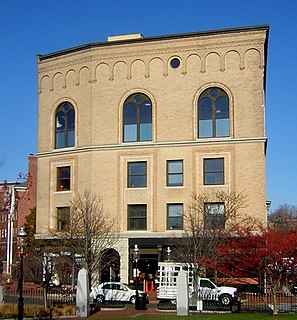 Appalachian Mountain Club (AMC) is the oldest outdoor group in the United States. Created in 1876 to explore and preserve the White Mountains in New Hampshire, it has expanded throughout the northeastern U.S., with 12 chapters stretching from Maine to Washington, D.C. The AMC's 275,000 members, advocates, and supporters mix outdoor recreation, particularly hiking and backpacking, with environmental activism. Additional activities include cross-country skiing, whitewater and flatwater canoeing and kayaking, sea kayaking, sailing, rock climbing and bicycle riding. The Club has about 2,700 volunteers, who lead roughly 7,000 trips and activities per year. The organization publishes a number of books, guides, and trail maps. 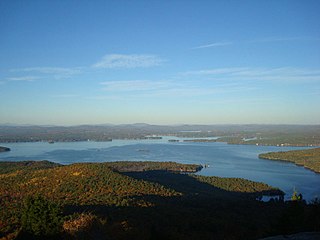 Lake Winnipesaukee is the largest lake in the U.S. state of New Hampshire, located in the Lakes Region at the foothills of the White Mountains. It is approximately 21 miles (34 km) long (northwest-southeast) and from 1 to 9 miles wide (northeast-southwest), covering 69 square miles (179 km2)—71 square miles (184 km2) when Paugus Bay is included—with a maximum depth of 180 feet (55 m). The center area of the lake is called The Broads.

The Greater Saint Louis Area Council of the Boy Scouts of America was formed in 1911 and is based in St. Louis, Missouri. The council serves Scouts in the St. Louis Metro area, southeast Missouri, and southern and central Illinois.

Camp Orkila is on the northwest shoulder of Orcas Island in the San Juan Islands of Washington, overlooking Presidents Channel, and the Canadian Gulf Islands. It has been in operation since 1906.

Lake Kanasatka is a 371-acre (150 ha) lake located in Carroll County in the Lakes Region of central New Hampshire, United States, in the town of Moultonborough. Early maps refer to the lake as "Long Pond", presumably because of its long and narrow shape, "Quinebarge Pond" or "Lake Quinebarge". The lake is located one-half mile north of and nine vertical feet higher than Lake Winnipesaukee. Lake Kanasatka lies at the base of Red Hill and is largely fed by its rain and snow runoff.

Camp Manitou-Lin is located in Middleville, Michigan, United States, approximately 30 miles south of Grand Rapids. Operated by the YMCA, it was founded in 1913 as a summer camp on the shores of Old Lake Barlow. The camp is at least 160 acres (0.65 km2). There are two main parts of camp - Day Camp and Main Camp - that are separated by Briggs Road.

Camp Sealth is owned and operated by Camp Fire, a non-profit youth organization, and located on Vashon Island, Washington. Sealth hosts resident and day camp during the summer, environmental education for school groups during the spring and fall, and is a year-round conference and retreat center. Camp Sealth is accredited by the American Camp Association.

Camp Tousey was a YMCA summer camp located about two miles (3 km) from the village of Redwood in Jefferson County, New York in the United States, and about eight miles (13 km) from Alexandria Bay, New York, a small resort town on the St. Lawrence River in the Thousand Islands area. The camp was operated by the Syracuse, New York YMCA for many decades during the twentieth century. Non-Christians were not excluded from the camp and many attended. The camp comprised 500 acres (2.0 km2) wooded on the shores of Millsite Lake and of Sixberry Lake and also included Royale Island on Millsite Lake, just offshore from the main camp. The terrain was rugged, with a tall rocky cliff backing the buildings of the main camp, clustered along Millsite Lake. Standing atop the cliffs provided an expansive view of the camp and of Millsite Lake.

The Patriots' Path Council includes Morris, Sussex, Somerset, Union, and Middlesex counties in New Jersey. It was established in 2000 with the merger of the Morris-Sussex Area Council (1936–1999) and the Watchung Area Council (1926–1999). On February 6, 2014, Patriots Path Council absorbed several Scouting units from the dissolved Central New Jersey Council (1999-2014).

Raquette Lake Camps is a group of summer camps located in the center of the Adirondack Mountains in upstate New York, west of Lake George and south of Lake Placid. Campers can canoe for a radius of 100 miles (160 km) in all directions. The majority of the adjacent land is owned by the state and is utilized as a state park.

The Little Lyford Pond camps is a historic logging camp located in the Maine Woods.

The Northern New Jersey Council was formed in January 1999 as a joint venture between the independent councils of Bergen, Essex, Hudson and Passaic counties as an effort to better serve the Scouting communities encompassed in these areas. By drawing on the strengths of each of these individual councils and merging them together, the Northern New Jersey Council has committed itself to offering the finest Scouting programs, increasing membership and providing strong, supportive leadership.

YMCA Camp Belknap is an all-boys summer resident camp in Tuftonboro, New Hampshire, on the shores of Lake Winnipesaukee. Founded in 1903, on Winnipesaukee's Timber Island, in the shadow of Belknap Mountain, its likely namesake. Relocated to Tuftonboro in 1907, this boys' camp was owned and operated by the New Hampshire YMCA until the demise of the state Y in 1996. It is now an independent non-profit affiliated with the national Y. Belknap celebrated its 100th year in operation in 2003, making it one of the oldest continuously operating camps in the United States.

Camp Kabeyun is a summer camp for boys founded in 1924 by educator John Porter. It sits on 85 acres on the south end of Lake Winnipesaukee in Alton, New Hampshire. Kabeyun's program is designed to encourage boys' individual growth, self-awareness, and confidence in the context of community living. Boys at Kabeyun choose their own activities each morning and again at lunch. Activities include land and water sports, projects such as photography and leather working, and adventure trips, often in the White Mountains. Kabeyun has a high staff return rate and many counselors who are former campers. Former camper and counselor Josh Wolk wrote a memoir, Cabin Pressure, based on Kabeyun. 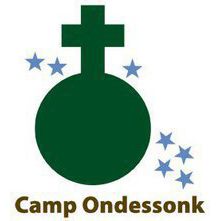 Camp Ondessonk is a rustic, outdoor, Catholic youth camp run by the Belleville Diocese. It is located in the Shawnee National Forest of Southern Illinois, near Ozark, Illinois. The camp strives to remain a “last frontier” of sorts, where participants can experience life away from the plugged in world of today's society, and go back to a time of outdoor living while experiencing nature to the fullest. Camp Ondessonk states their mission to be "to provide an environment that inspires physical, mental, emotional, and spiritual growth for individuals and groups through the appreciation and stewardship of nature." Camp Ondessonk is accredited by the American Camp Association.

The Salvation Army has maintained camps in various locations throughout Canada. While some of these sites have ceased operation over the years, many are still in operation.