Thyris is a genus of moths of the family Thyrididae. [1] [2] 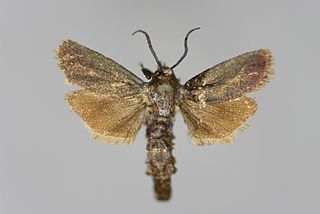 Brachodidae is a family of day-flying moths, commonly known as little bear moths, which contains about 135 species distributed around much of the world. The relationships and status of the presently included genera are not well understood.

Whalleyana is an enigmatic genus of moths in the lepidopteran group Obtectomera, endemic to Madagascar. The genus contains two species, whose biology and closest relatives are unknown. The genus had been placed in the picture-winged leaf moths, (Thyrididae), but then was placed in its own family, and later elevated to its own superfamily ; see also Fänger (2004). The genus was named after Paul E. S. Whalley, a British entomologist.

Acanthoctesia or "archaic sun moths" is an infraorder of insects in the lepidopteran order, containing a single superfamily, Acanthopteroctetoidea, and a single family, Acanthopteroctetidae. They are currently considered the fifth group up on the comb of branching events in the extant lepidopteran phylogeny. They also represent the most basal lineage in the lepidopteran group Coelolepida characterised in part by its scale morphology. Moths in this superfamily are usually small and iridescent. Like other "homoneurous" Coelolepida and non-ditrysian Heteroneura, the ocelli are lost. There are variety of unique structural characteristics. There are two described genera of these primitive moths. Catapterix was originally described within its own family but Acanthopteroctetes shares with it a number of specialised structural features including similar wing morphology. 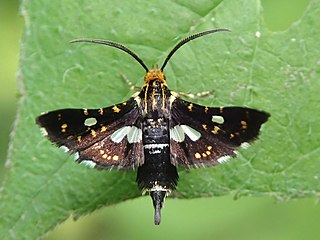 Thyris usitata is a moth of the family Thyrididae. It is found in Russia and Japan.

Agdistis is a genus of moths in the family Pterophoridae described by Jacob Hübner in 1825. It is the only genus in the Agdistinae subfamily which was described by J. W. Tutt in 1907.

Scardia is a genus of the fungus moth family (Tineidae). Therein, it belongs to the subfamily Scardiinae, of which it is the type genus. Several of the species placed here in earlier times have been moved to other genera of the subfamily, e.g. Amorophaga, Montescardia, and Morophaga.

Cnaemidophorus is a genus of plume moths in the family Pterophoridae. It was first described by Hans Daniel Johan Wallengren in 1862.

Micropterix abchasiae is a species of moth belonging to the family Micropterigidae that was described by Aleksei Zagulyaev in 1983. It is only found in Abkhazia in Georgia. 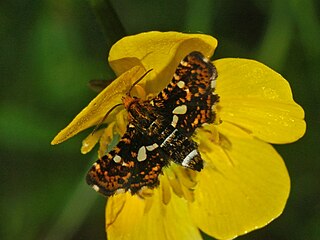 The pygmy (moth) is a moth of the family Thyrididae.

Pterotopteryx is a genus of moths in the family Alucitidae. The genus was described by Hans-Joachim Hannemann in 1959.

Micropterix avarcella is a species of moth belonging to the family Micropterigidae that was described by Aleksei Konstantinovich Zagulajev in 1994, and is endemic to Russia.

Ochsenheimeria is a genus of moths of the family Ypsolophidae and only genus in the subfamily Ochsenheimeriinae.

Banisia myrsusalis, the sapodilla borer or sapota midrib folder, is a species of moth of the family Thyrididae. It was described by Francis Walker in 1859 and is found in North America, Brazil, Australia, southern Asia and Africa.

Deuterotinea is a genus of moths in the Eriocottidae family.