Last updated July 03, 2020
This article is about the legendary king of Alba Longa. For the Roman deity, see Tiberinus (god).

Tiberinus (said to have reigned 922-914 BC) [1] was the ninth king of Alba Longa, according to the traditional history of Rome handed down by Titus Livius. He was the successor (and probably son) of Capetus, the eighth king of Alba Longa. The Alban kings claimed descent from Aeneas, a Trojan prince who brought a remnant of the Trojan populace to Italy following the sack of Troy (traditionally 1184 BC), and settled in Latium. Alba was built by Ascanius, the son of Aeneas and Lavinia, and founder of the Alban royal line. The Alban kings, including Tiberinus, bore the cognomen Silvius, after the son of Ascanius, who was said to have been born in the woods. [2]

The only tradition specifically attached to Tiberinus is that he was drowned while crossing the river then known as the Albula, but which was ever after known to the Latins as the Tiber. This ancient river formed the boundary of Latium and Etruria, and the city of Rome was later founded on a group of seven hills overlooking its banks. After his death, Tiberinus was revered as the god of the river (see Tiberinus (god)). In the earliest days of Rome, the cult of Tiberinus survived at the Volturnia, the archaic festival of Volturnus, but no details are known. [3]

Tiberinus was succeeded by Agrippa, the tenth king of Alba Longa, and probably his son. Amongst their descendants were Romulus and Remus, the founders of Rome (traditionally 753 BC). [4]

Many scholars believe that the name of Tiberinus was derived from the river, instead of the other way around. The same root is thought to be the origin of the Latin praenomen Tiberius , and its Etruscan cognate, Thefarie, and it may be noted that Tiberinus appears to be derived from Tiberius, which may have been the original form of the name. Philologist George Davis Chase believed that the same root might be found in the names of the city of Tibur, the Umbrian town of Tifernum, and the Samnite river Tifernus. [5] 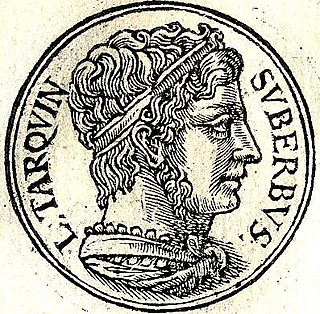 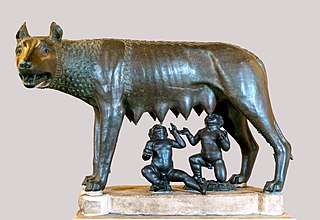 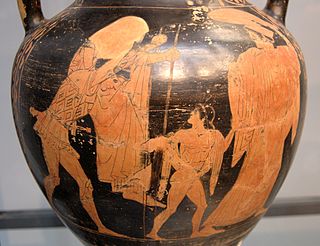 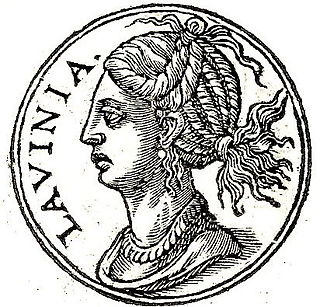 In Roman mythology, Lavinia is the daughter of Latinus and Amata, and the last wife of Aeneas.

In ancient Rome, a gens, plural gentes, was a family consisting of individuals who shared the same nomen and who claimed descent from a common ancestor. A branch of a gens was called a stirps. The gens was an important social structure at Rome and throughout Italia during the period of the Roman Republic. Much of individuals' social standing depended on the gens to which they belonged. Certain gentes were classified as patrician, others as plebeian; some had both patrician and plebeian branches. The importance of membership in a gens declined considerably in imperial times, although the gentilicium continued to be used and defined the origins and dynasties of Roman emperors.

The Albans were Latins from the ancient city of Alba Longa, southeast of Rome. Some of Rome's prominent patrician families such as the Julii, Servilii, Quinctii, Geganii, Curiatii and Cloelii were of Alban descent.

Gaius Cluilius was the king of Alba Longa during the reign of the Roman king Tullus Hostilius in the middle of the seventh century BC. Alba Longa was an ancient city of Latium in central Italy southeast of Rome. 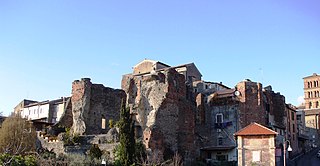 Alba Longa was an ancient Latin city in Central Italy, 12 miles (19 km) southeast of Rome, in the Alban Hills. Founder and head of the Latin League, it was destroyed by the Roman Kingdom around the middle of the 7th century BC, and its inhabitants were forced to settle in Rome. In legend, Romulus and Remus, founders of Rome, had come from the royal dynasty of Alba Longa, which in Virgil's Aeneid had been the bloodline of Aeneas, a son of Venus.

The gens Cloelia, originally Cluilia, and occasionally written Clouilia or Cloulia was initially a patrician family at Rome. The gens was prominent throughout the period of the Republic. The first of the Cloelii to hold the consulship was Quintus Cloelius Siculus, in 498 BC.

The gens Curiatia was a distinguished family at Rome, with both patrician and plebeian branches. Members of this gens are mentioned in connection with the reign of Tullus Hostilius, the third King of Rome, during the seventh century BC. The first of the Curiatii to attain any significant office was Publius Curiatius Fistus, surnamed Trigeminus, who held the consulship in 453 BC. The gens continued to exist throughout the Republic, and perhaps into imperial times, but seldom did its members achieve any prominence.

Agrippa is a Latin praenomen, or personal name, which was most common during the early centuries of the Roman Republic. It was sometimes abbreviated Agr., or occasionally Agripp.; both forms are found in the Fasti Capitolini. Despite ending in -a, it is a masculine name. The feminine form was probably Agrippina, which is also found as a cognomen, or surname, but no examples of its use as a praenomen have survived. 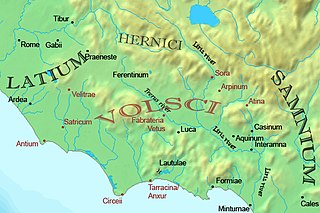 The Latins, sometimes known as the Latians, were an Italic tribe which included the early inhabitants of the city of Rome. From about 1000 BC, the Latins inhabited the small region known to the Romans as Old Latium, that is, the area between the river Tiber and the promontory of Mount Circeo 100 kilometres (62 mi) SE of Rome.

Mettius is a Latin praenomen, or personal name, which was used in pre-Roman times and perhaps during the early centuries of the Roman Republic, but which was obsolete by the 1st century BC. The feminine form is Mettia. The patronymic gens Mettia was derived from this praenomen. The name was rare in historical times, and not regularly abbreviated.

Proculus is a Latin praenomen, or personal name, which was most common during the early centuries of the Roman Republic. It gave rise to the patronymic gentes Proculeia and Procilia, and later became a common cognomen, or surname. The feminine form is Procula. The name was not regularly abbreviated.

Tiberius is a Latin praenomen, or personal name, which was used throughout Roman history. Although not especially common, it was used by both patrician and plebeian families. The feminine form is Tiberia. The name is usually abbreviated Ti., but occasionally Tib.

The gens Decimia was a plebeian family at Rome. Members of this gens are first mentioned towards the end of the third century BC.

The Latin War was a war fought between the Roman Republic and the Latin League from 498 BC to 493 BC.