Tidal flooding, also known as sunny day flooding [1] or nuisance flooding, [2] is the temporary inundation of low-lying areas, especially streets, during exceptionally high tide events, such as at full and new moons. The highest tides of the year may be known as the king tide, with the month varying by location. These kinds of floods tend not to a high risk to property or human safety, but further stress coastal infrastructure in low lying areas. [3]

This kind of flooding is becoming more common in cities and other human-occupied coastal areas as sea level rise associated with climate change and other human-related environmental impacts such as coastal erosion and land subsidence increase the vulnerability of infrastructure. [4] Geographies faced with these issues can utilize coastal management practices to mitigate the effects in some areas, but increasingly these kinds of floods may develop into coastal flooding that requires managed retreat or other more extensive climate change adaptation practices are needed for vulnerable areas.

Tidal flooding is capable of majorly inhibiting natural gravity-based drainage systems in low-lying areas when it reaches levels that are below visible inundation of the surface, but which are high enough to incapacitate the lower drainage or sewer system. Thus, even normal rainfall or storm surge events can cause greatly amplified flooding effects. One passive solution to intrusion through drainage systems are one way back-flow valves in drainage ways. However, while this may prevent a majority of the tidal intrusion, it also inhibits drainage during exceptionally high tides that shut the valves. In Miami Beach, where resilience work is underway, the pump systems replace insufficient gravity-based systems. [5]

Most of the coastal communities in the Eastern Seaboard of the United States are vulnerable to this kind of flooding as sea level rise increases. [6]

Due to changing geography such as subsidence, and poorly planned development, tidal flooding may exist separate from modern nuisance flooding associated with sea level rise and anthropocentric climate change. The widely publicized Holland Island in Maryland for example has disappeared over the years mainly due to subsidence and coastal erosion. [7] In the New Orleans area on the Gulf Coast of Louisiana, land subsidence results in the Grand Isle tide gauge showing an extreme upward sea level trend. [8]

Saltwater in drain on a bayfront street (Brickell Bay Drive) in Miami just up to street level; while not a direct flood, this inhibits normal passive, gravity-based drainage.
The extent of tidal flooding varies by region, with the Chesapeake Bay town of Annapolis, Maryland having an annual tidal flooding profile substantially affected by sea level rise caused by climate change. [9]

In Florida, controversy arose when state-level government mandated that the term "nuisance flooding" and other terms be used in place of terms such as sea level rise, climate change and global warming, prompting allegations of climate change denial, specifically against Governor Rick Scott. This amid Florida, specifically South Florida and the Miami metropolitan area being one of the most at risk areas in the world for the potential effects of sea level rise, and where the frequency and severity of tidal flooding events increased in the 21st century. [10] The issue is more bipartisan in South Florida, particularly in places like Miami Beach, where a several hundred million dollar project is underway to install more than 50 pumps and physically raise roads to combat the flooding, mainly along the west side of South Beach, formerly a mangrove wetland where the average elevation is less than one meter (3.3 feet).

In the Miami metropolitan area, where the vast majority of the land is below 10 ft (3.0 m), even a one-foot increase over the average high tide can cause widespread flooding. The 2015 and 2016 king tide event levels reached about 4 feet (1.2 m) MLLW, 3 feet (0.9 m) above mean sea level, or about 2 ft (0.61 m) NAVD88, and nearly the same above MHHW. [11] While the tide range is very small in Miami, averaging about 2 ft (0.61 m), with the greatest range being less than 2 m (6.6 ft), [12] the area is very acute to minute differences down to single inches due to the vast area at low elevation. NOAA tide gauge data for most stations shows current water level graphs relative to a fixed vertical datum, as well as mean sea level trends for some stations. During the king tides, the local Miami area tide gauge at Virginia Key shows levels running at times 1 foot (0.30 m) or more over datum.

Fort Lauderdale has installed over one hundred tidal valves since 2013 to combat flooding. Fort Lauderdale is nicknamed the "Venice of America" due to its roughly 165 miles (266 km) of canals. [13]

A recent University of Florida study correlated the increased tidal flooding in south Florida, at least from 2011–15 to episodic atmospheric conditions. [14] The rate was about 3/4 of an inch (19 mm) per year, versus the global rate of just over a tenth of an inch (3 mm) per year. [15]

The coast, also known as the coastline or seashore, is defined as the area where land meets the sea or ocean, or as a line that forms the boundary between the land and the ocean or a lake. Earth has around 620,000 kilometres (390,000 mi) of coastline. Because coasts are constantly changing, a coastline's exact perimeter cannot be determined; this measurement challenge is called the coastline paradox. The term coastal zone is used to refer to a region where interactions of sea and land processes occur. Both the terms coast and coastal are often used to describe a geographic location or region located on a coastline.

A rip tide, or riptide, is a strong, offshore current that is caused by the tide pulling water through an inlet along a barrier beach, at a lagoon or inland marina where tide water flows steadily out to sea during ebb tide. It is a strong tidal flow of water within estuaries and other enclosed tidal areas. The riptides become the strongest where the flow is constricted. When there is a falling or ebbing tide, the outflow water is strongly flowing through an inlet toward the sea, especially once stabilized by jetties. During these falling and ebbing tides, a riptide can carry a person far offshore. For example, the ebbing tide at Shinnecock Inlet in Southampton, New York, extends more than 300 metres (980 ft) offshore. Because of this, riptides are typically more powerful than rip currents.

A storm surge, storm flood, tidal surge or storm tide is a coastal flood or tsunami-like phenomenon of rising water commonly associated with low-pressure weather systems, such as cyclones. It is measured as the rise in water level above the normal tidal level, and does not include waves. Most casualties during tropical cyclones occur as the result of storm surges. 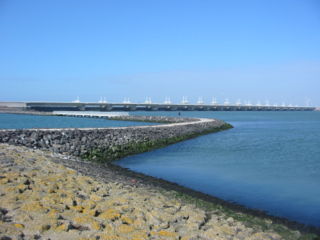 Coastal management is defence against flooding and erosion, and techniques that stop erosion to claim lands.

A tidal river is a river whose flow and level are influenced by tides. A section of a larger river affected by the tides is a tidal reach, but it may sometimes be considered a tidal river if it has been given a separate name. 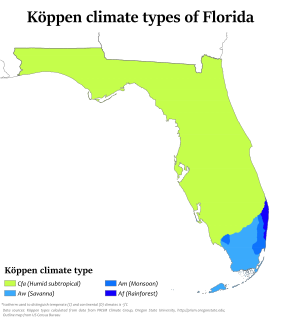 The effects of Climate change in Florida is attributable to man-made increases in atmospheric carbon dioxide. Floridians are experiencing increased flooding due to sea level rise, and are concerned about the possibility of more frequent or more intense hurricanes.

Global sea level rise began around the start of the 20th century. Between 1900 and 2016, the globally averaged sea level rose by 16–21 cm (6.3–8.3 in). More precise data gathered from satellite radar measurements reveal an accelerating rise of 7.5 cm (3.0 in) from 1993 to 2017, which is a trend of roughly 30 cm (12 in) per century. This acceleration is due mostly to human-caused global warming, which is driving thermal expansion of seawater and the melting of land-based ice sheets and glaciers. Between 1993 and 2018, thermal expansion of the oceans contributed 42% to sea level rise; the melting of temperate glaciers, 21%; Greenland, 15%; and Antarctica, 8%. Climate scientists expect the rate to further accelerate during the 21st century.

Climate of Miami is classified as having a tropical monsoon climate. With hot and humid summers; short, warm winters; and a marked drier season in the winter. Its sea-level elevation, coastal location, position just above the Tropic of Cancer, and proximity to the Gulf Stream shape its climate. With January averaging 69.2 °F (20.7 °C), winter features warm temperatures; cool air usually settles after the passage of a cold front, which produces much of the little amount of rainfall. Lows sometimes fall to or below 50 °F (10 °C), with an average 3 such occurrences annually, but rarely 40 °F (4 °C); from 1981 to 2010, temperatures reached that level in only eight calendar years. Highs generally reach 70 °F (21 °C) or higher, and fail to do so on only an average of 12 days annually. 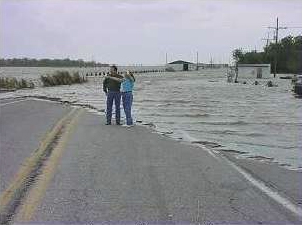 Coastal flooding normally occurs when dry and low-lying land is submerged by seawater. The range of a coastal flooding is a result of the elevation of floodwater that penetrates the inland which is controlled by the topography of the coastal land exposed to flooding. Flood damage modelling was limited to local, regional or national scales. However, with the presence of climate change and an increase in the population rates, flood events have intensified and called for a global interest in finding out different methods with both spatial and temporal dynamics.

The New York Harbor Storm-Surge Barrier is a proposed barrier and floodgate system to protect the New York-New Jersey Harbor Estuary from storm surges. The proposed system would consist of one barrier located across the mouth of Lower New York Bay between Sandy Hook (N.J.) and Far Rockaway (N.Y.) and second on the upper East River to provide a ring of protection to most of the bi-state region. Through extensive use of floodgates, both barriers would have largely open cross-sections during normal conditions to minimize environmental impacts on the estuary and port operations.

Climate change in Delaware encompasses the effects of climate change, attributed to man-made increases in atmospheric carbon dioxide, in the U.S. state of Delaware.

Climate change in Georgia encompasses the effects of climate change, attributed to man-made increases in atmospheric carbon dioxide, in the U.S. state of Georgia. 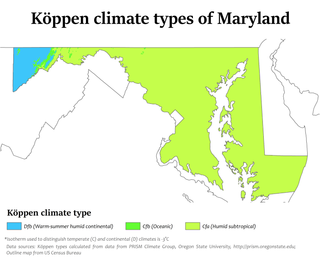 Climate change in Maryland encompasses the effects of climate change, attributed to man-made increases in atmospheric carbon dioxide, in the U.S. state of Maryland.

Climate change in Mississippi encompasses the effects of climate change, attributed to man-made increases in atmospheric carbon dioxide, in the U.S. state of Mississippi. 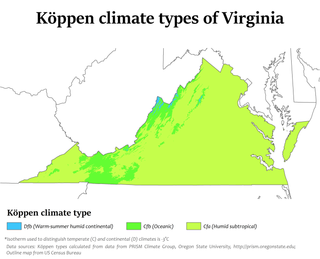 Climate change in Virginia encompasses the effects of climate change, attributed to man-made increases in atmospheric carbon dioxide, in the U.S. state of Virginia.

Sinking cities are urban environments that are in danger of disappearing due to their rapidly changing landscapes. The largest contributors to these cities becoming unlivable are the combined effects of climate change, land subsidence, and accelerated urbanization. Many of the world's largest and most rapidly growing cities are located along rivers and coasts, exposing these focal points of economic and cultural activity to natural disasters. As countries continue to invest people, assets, and infrastructure into these cities, the loss potential in these areas also increases. Sinking cities must overcome substantial barriers to properly prepare for today's dynamic environmental climate.