The Tielman Brothers was the first Dutch-Indonesian band to successfully venture into the international music scene in the 1950s. They were one of the pioneers of rock and roll in The Netherlands, and are credited with releasing the first Dutch rock and roll single, "Rock Little Baby of Mine" in 1958. The band became famous in Europe for playing a kind of rock and roll later called Indorock, a fusion of Indonesian and Western music with roots in Kroncong. At the height of their career, in the 1950s and early 1960s, the band was hailed as one of the greatest live-acts in Europe.

The founders of the band are the children of Herman Tielman from Kupang, East Nusa Tenggara (NTT), Eastern Indonesia and Flora Lorine Hess: Andy (vocals, guitar), Reggy (guitar), Ponthon (bass) and Loulou Tielman (drums). They grew up in Indonesia, where they first performed under the names Timor Brothers and the Four T's. [1] Although not the first band, the Tielman Brothers were at the forefront of what was later called the Indorock scene. [2]

In 1956, The Tielman Brothers moved to The Netherlands, first to Breda, later to The Hague. Their performances were noted because of their spectacular stage act, which included guitar tossing. [3]

In 1958 the band were part of the Dutch pavilion at the Brussels World Fair. They were the relief band. While the Hawaiian band took a break, the Tielman brothers were supposed to be on for just 15 minutes but took advantage of the opportunity. While on stage they excited the audience with their stage antics while tossing instruments to each other and playing the bass with their teeth etc. [4] Their energetic stage performance drew the attention of international concert promoters, and the band was booked to play for several concerts in German night clubs, including on the Reeperbahn in Hamburg. [3]

After the World Fair, The Tielman Brothers were signed by the Belgian record label Fernap Records to record their first single, a song called Rock Little Baby of Mine. This is considered to be the first Dutch rock 'n' roll record. [3] [5] In 1959, the band was signed to Imperial Records. [1]

In 1960, an additional guitarist joined the band, Frank Luyten. In Germany, the band grew out to be a popular live act. The band received there a fee of 20,000 guilders to perform for a month, and Ariola released records especially for the German market. [1] In their wake many more indorock bands started to perform in Germany. The Tielman Brothers also performed in Austria, Switzerland, Belgium, France, Italy and Sweden. In The Netherlands, they were less successful, mainly performing in their hometown The Hague. The band got little attention from the Dutch media: a performance on the TV program Avro Weekend Show in January 1960 was criticized because they incorporated a Mozart melody (Piano Sonata No. 16) in the song "18th Century Rock". [3]

At the beginning of 1964, Andy and Reggy were involved in a serious car accident in Germany. It marked the start of many line-up changes, with Andy Tielman as the only permanent member. Luyten en Alfons Faverey left the Tielman Brothers in 1964 to form the rhythm & blues band The Time Breakers. [1] In 1966, The Tielman Brothers were joined by George de Fretes, who was with them for a short period of time. [6] [7] Other musicians that were with the band for a short period of time include Rob Latuparissa (drums), Hans Bax (guitar), Roy udy Piroeli (guitar) and Leo Masengi (saxophone).

At the end of 1967, the Tielman Brothers released the single "Little Bird", which would become their biggest hit in The Netherlands. The single reached No. 7 in the Dutch Top 40. [8]

In later years, the Tielman Brothers moved to Australia. The move possibly came about from what they felt was racism and them not getting due credit for their efforts in the music business. [9] The band members would occasionally return to Europe for performances. In 1983, Andy Tielman disbanded the band. [1]

In 1990, The Tielman Brothers got together for a reunion concert. Reggy and Ponthon were not present. [1] 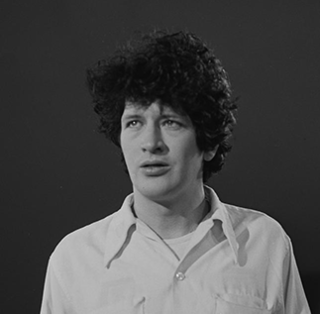 Hermanus "Herman" Brood was a Dutch musician, painter, actor and poet. As a musician he achieved artistic and commercial success in the 1970s and 1980s, and was called "the greatest and only Dutch rock 'n' roll star". Later in life he started a successful career as a painter. 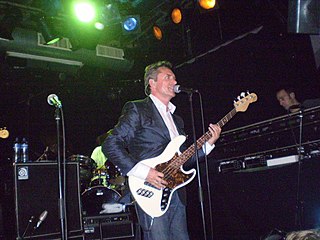 Doe Maar was a Dutch ska band with punk and reggae influences whose career peaked from 1978 to 1984. They are one of the most successful pop bands in Dutch history. 'Doe maar' translates as go ahead or just do it.

Golden Earring was a Dutch rock band, founded in 1961 in The Hague as The Golden Earrings. They achieved worldwide fame with their international hit songs "Radar Love" in 1973, which went to number one on the Dutch charts, reached the top ten in the United Kingdom, and went to number thirteen on the United States charts, "Twilight Zone" in 1982, and "When the Lady Smiles" in 1984. During their career they had nearly 30 top-ten singles on the Dutch charts and released 25 studio albums.

The Netherlands has multiple musical traditions. Contemporary Dutch popular music is heavily influenced by music styles that emerged in the 1950s, in the United Kingdom and United States. The style is sung in both Dutch and English. Some of the latter exponents, such as Golden Earring and Shocking Blue, have attained worldwide fame.

Diesel is a Dutch pop/rock group that became one of the relatively few Dutch acts to chart in the U.S. when their song "Sausalito Summernight" entered the U.S. Top 40 in 1981.

Kane was a Dutch pop rock band. In its final stage, the group consisted of the two original members, Dinand Woesthoff and Dennis van Leeuwen (guitar). The band was inspired by U2, Pearl Jam, Queen, and Nirvana. 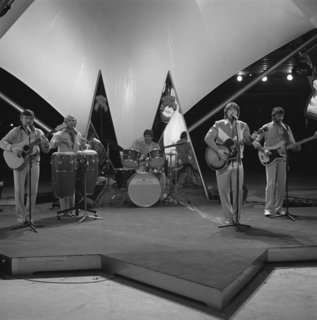 The Cats were a Dutch rock band formed in Volendam in 1964.

Indorock is a musical genre that originated in the 1950s in the Netherlands. It is a fusion of Indonesian and Western music, with roots in Kroncong. The genre was invented by Indo repatriates in the Netherlands after Indonesian independence on August 17, 1945, and became popular especially in Germany. Indorock is one of the earliest forms of "Eurorock". Its influence on Dutch popular music was immense.

Nederbeat was the Dutch rock boom of mid-1960s influenced by British beat groups and rock bands such as the Beatles and the Rolling Stones and, much like British freakbeat, it is essentially the Dutch counterpart to American garage rock. Among the best-known Nederbeat groups are the Golden Earrings, The Motions, The Outsiders and Shocking Blue.

The Kentucky Colonels were a bluegrass band that was popular during the American folk music revival of the early 1960s. Formed in Burbank, California in 1954, the group released two albums, The New Sound of Bluegrass America (1963) and Appalachian Swing! (1964). The band featured the influential bluegrass guitarist Clarence White, who was largely responsible for making the acoustic guitar a lead instrument within bluegrass, and who later went on to join the Los Angeles rock band the Byrds. The Kentucky Colonels disbanded in late 1965, with two short-lived reunions taking place in 1966 and 1973. 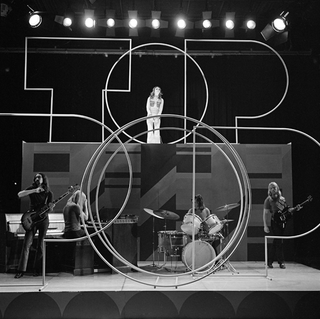 Earth and Fire were a locally successful Dutch, anglophonic progressive / symphonic rock band, that over time evolved into a pop group. Formed in the Netherlands by twin brothers Chris and Gerard Koerts, and most popular from 1970, after adding a female singer, turning frontwoman, Jerney Kaagman.

Louise Johanna "Anneke" Grönloh was an Indonesian-born Dutch singer. She had a successful career starting in 1959 that lasted throughout the 1960s, and scored a hit with "Brandend zand", one of the best-selling Dutch songs of all time.

Dutch rock is a form of rock music produced in the Netherlands, primarily in the English language as well as in Dutch.

Andy Tielman was an influential Indo (Eurasian) artist, recognised as the "godfather" of Indorock, the style of rock and roll played by Indo artists in the 1950s and 1960s. He is considered one of the most important figures in Dutch popular music, and "defied the notion that early rock and roll was a phenomenon of white and black musicians from America".

The Bintangs are a Dutch rhythm and blues band. Founded in 1961 in Beverwijk as an indorock band, they soon began playing a rougher, rhythm and blues-inflected style. The band had a four-year hiatus in the 1980s but reunited and are still active. The band has gone through many members, with Frank Kraaijeveld as a constant element. They scored one hit, in 1970, and though commercial success has eluded them nationally and internationally they remain a popular live act.

Rudi Wairata aka Rudy Wairata(1929/1930 –1981) was an influential Indonesian musician who had fronted the Mena Moeria Minstrels and the Amboina Serenaders. Wairata's style of playing was influenced by Sol Hoʻopiʻi and Andy Iona. Along with George de Fretes he was a prominent musician in the genre of Hawaiian steel guitar music. His song "Rock'n Roll Breezes" may be the first Indo-rock song.

George de Fretes (1921-1981) was a musician from Indonesia who found fame in the Netherlands. Like his fellow countrymen Ming Luhulima and Rudi Wairata, he found sizable popularity in the Netherlands and Europe playing Hawaiian music.

Wanda de Fretes is a singer and recording artist who was popular in the Netherlands in the 1960s. She is also the daughter of legendary Moluccan steel guitarist George de Fretes and singer Joyce Aubrey. In addition to her solo efforts, she also recorded with her mother as the duo Wanda & Joyce. Besides singing pop and rock'n roll, she also sang traditional Indonesian and Malayan songs.

Joyce Aubrey was a singer and recording artist who was popular in the Netherlands in the 1960s as part of the duo Wanda & Joyce. She is also the mother of singer Wanda de Fretes as well as the ex-wife of legendary steel guitarist George de Fretes. In addition to her solo efforts, she also recorded with George de Fretes and the Amboina Serenaders, a popular Netherlands based band whose members included Ming Luhulima and Rudi Wairata. Some of their songs did well in Germany as well.