The Tiffin School Boat Club (also known as TSBC) is an amateur rowing club, based in London, run by Tiffin School. It is based on the River Thames at Kingston upon Thames on the outskirts of Greater London in south-east England between Kingston Bridge and Teddington Lock.

Rowers enjoy one of the longest and calmest stretches of rowing water in the UK; 4.81 miles (7.74km) between Molesey Lock upstream to the south and downstream to Teddington Lock.

In the past it has hosted the Tiffin Small Boats Head. [3] The club also organise a biennial sponsored row from Oxford to Kingston; the "OK Row". [4]

The current head coach at the club is Alex DiLuzio, whilst the boatman, David White, manages all the club's equipment. The club has managed in the past to qualify boats for the Henley Royal Regatta.

The boat club usually accepts members of age groups J14 to J18 (or students in years 9 to 13). Generally, a series of tests compromising of ergometer trials, as well as a run, sees 30 students who trial in year 9 join the boat club. However, it is generally possible for willing students to join, without trial, later on in the school. The boat club will also accept younger members if they have previous rowing or sculling experience. Members may also continue to participate in TSBC activities after leaving Tiffin School.

Since 2011, [5] the boat club has also accepted girls from the sister school, The Tiffin Girls' School. It is one of the few school rowing clubs in the state sector.

Kingston upon Thames is a town and borough in Greater London, England, and within the historic county of Surrey. It is situated on the River Thames, about 33 feet (10 m) above sea level and 10 miles (16 km) southwest of Charing Cross. It is notable as the ancient market town in which Saxon kings were crowned and today is the administrative centre of the Royal Borough of Kingston upon Thames. 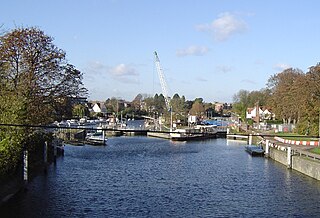 The Thames Rowing Club (TRC) is the joint third-oldest non-academic rowing club on the Thames and is in Putney, London. It was founded in 1860, the same year as Twickenham Rowing Club. The TRC clubhouse is situated on Putney Embankment and was constructed in 1879 with several later additions. 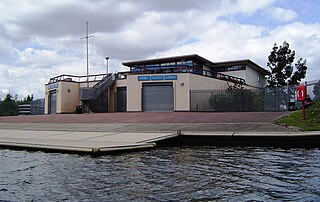 Raven's Ait is an ait (island) in the Thames between Surbiton, Kingston and Hampton Court Park in the Royal Borough of Kingston upon Thames, London, England, in the reach of the river above Teddington Lock. Used as a boating training centre for many years, Raven's Ait is currently privately run as a catering facility and a conference and wedding venue. 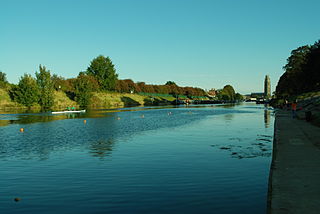 The Boston Rowing Marathon is a rowing head race taking place on the third Sunday of September annually in Lincolnshire, England, over the exceptionally long distance of 49.2 km. The course is along the River Witham from Lincoln to Boston.

Staines Boat Club is a rowing club between Penton Hook Lock and Bell Weir Lock on the River Thames in England. The club was founded in 1851 where its boathouse stands with hardstanding next to the Hythe spur of the Thames Path in Egham Hythe, historically also known as Staines hythe, the last word meaning small harbour or river harbour.

Steven's Eyot is a narrow ait (island) in the River Thames in the Royal Borough of Kingston upon Thames, London, England, on the non-tidal reach above Teddington Lock.

The River Thames is one of the main rowing areas in England, with activity taking place on the Tideway and on the 45 separate lock reaches on the non-tidal section. The river hosts two major rowing events, The Boat Race and Henley Royal Regatta, and many other regattas and long distance events take place on the river. Dorney Lake in Buckinghamshire was opened specifically as a rowing lake besides the Thames, and has become the venue for a few events that formerly took place on the river. Other lakes adjacent to the Thames are the Redgrave Pinsent Rowing Lake and Royal Albert Dock. Rowing, or sculling, includes skiffing, dinghy racing and cutter racing in which the boats are also propelled by blades.

The Skiff Club is the oldest skiff and punting club in existence, having been founded in 1895. It is based on the River Thames in London, on the Middlesex bank between Teddington Lock and Kingston upon Thames. 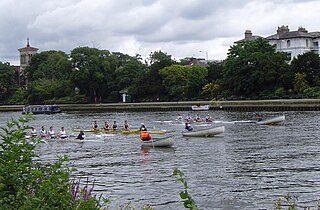 Kingston Regatta is a rowing regatta, on the River Thames in England which takes place at Kingston upon Thames, Surrey on the reach above Teddington Lock.

Walbrook Rowing Club, colloquially sometimes named Teddington Rowing Club, is a rowing club, on the River Thames in England on the Middlesex bank just above Teddington Lock at Trowlock Island, Teddington and downstream of Molesey Lock. It is the first non-tidal club on the weir-controlled Thames and is the organising club for Teddington Head of the River Race held in November for all classes of racing shells.

City of Cambridge Rowing Club (CCRC) is the oldest 'town' rowing and sculling club in Cambridge, UK, and with about 300 members, it has one of the largest active rowing memberships in the region. The club's colours are dark blue, with a band of claret sandwiched between two bands of 'old gold'. 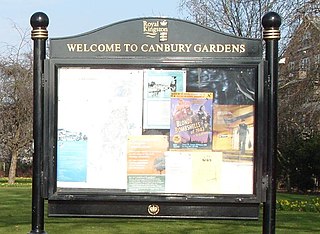 Canbury Gardens is a public space in the Canbury district of Kingston upon Thames, along the Lower Ham Road, covering 14½ acres area between the road and the towpath along the River Thames, downstream from Kingston Railway Bridge.

Richard Frederick Offer was an English rower who won Silver Goblets at Henley Royal Regatta and a silver medal at the 1938 British Empire Games.

York City Rowing Club is a rowing club situated on the bank of the River Ouse in York, England. It has over 200 members, of all ages. The boathouse is on the south bank of the river next to Lendal Bridge.

Reading University Boat Club is the rowing club for the University of Reading. It is based on the River Thames in Reading, Berkshire, United Kingdom. The club has a focus on sculling. It has been consistently one of the more successful university rowing clubs in Britain, including topping the medal table at the BUCS regatta in 2011 and at the BUCS small boats head in 2014 and 2015, as well as wins at Henley Royal Regatta in 1986, 2008, 2009, 2010, 2011 and 2013, and is considered one of the top six university rowing clubs in the UK. A number of former members have competed at the Olympics, including double gold-medallists James Cracknell and Helen Glover. The club has organised the Reading University Head of the River race since 1935.