Tighennif is a town and commune in Mascara Province, Algeria. According to the 2002 census it has a population of 55,800. [1] 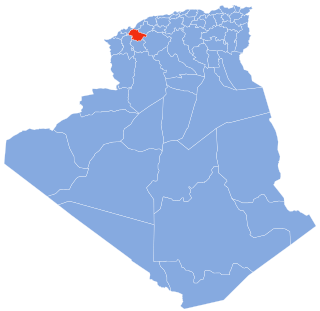 Mascara is a province (wilaya) in Algeria. It was named after its capital, whose name is Arabic for "military garrison", and which is unrelated to "mascara", the cosmetic. Another important locality is the town of Sig.

Sclerorhynchus is an extinct genus of ganopristid sclerorhynchoid that lived during the Late Cretaceous. The genus Ganopristis is considered a junior synonym of Sclerorhynchus. It was a widespread genus, with fossils found in the Middle East, North Africa, Europe, and North America. While it had a long rostrum with large denticles similar to sawfishes and sawsharks, its closest living relatives are actually skates. Complete specimens of S. atavus show that its fin arrangement was similar to skates, with the pectoral and pelvic fins touching, both dorsal fins located behind the pelvic fins, and a reduced caudal fin. 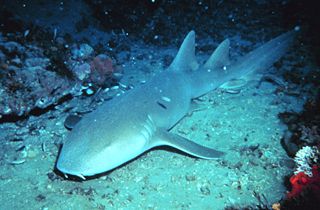 Arambourgiania is an extinct genus of azhdarchid pterosaur from the Late Cretaceous period of Jordan, and possibly the United States. Arambourgiania was among the largest members of its family, the Azhdarchidae, and it is also one of the largest flying animals ever known. The incomplete left ulna of the "Sidi Chennane azhdarchid" from Morocco may have also belonged to Arambourgiania.

Camille Arambourg was a French vertebrate paleontologist. He conducted extensive field work in North Africa. In the 1950s he argued against the prevailing model of Neanderthals as brutish and simian.

René Lavocat was a French paleontologist who described several genera of African dinosaurs including the sauropod Rebbachisaurus, as well as several extinct mammals such as the family Kenyamyidae. The mammal Lavocatia, the notosuchian Lavocatchampsa, the sauropod Lavocatisaurus and the phorusrhacid Lavocatavis are named after him.

Arambourgisuchus is an extinct genus of dyrosaurid crocodylomorph from the late Palaeocene of Morocco, found in the region of Sidi Chenane in 2000, following collaboration by French and Moroccan institutions, and described in 2005 by a team led by palaeontologist Stéphane Jouve. Arambourgisuchus was a large animal with an elongated skull 1 meter in length.

Dalpiazia is a prehistoric genus of sclerorhynchid sawfish whose fossils are found in rocks dating from the Maastrichtian stage in mines in Jordan and Syria, and in Morocco. The type species D. stromeri was named in honor of Ernst Stromer.

Congosaurus is an extinct genus of dyrosaurid mesoeucrocodylian. Fossils have been found from Lândana, in Angola and date back to the Paleocene epoch. In 1952 and 1964 Congosaurus was proposed to be synonymous with Dyrosaurus. The genus was later thought synonymous with Hyposaurus in 1976 and 1980. It has since been proven a distinct genus of dyrosaurid separate from both Dyrosaurus and Hyposaurus. 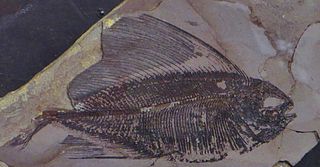 Tselfatia is an extinct genus of Cretaceous bony fish. Originally described from Djebl Tselfat in Morocco, it has since been discovered at sites in several other countries. The type species, Tselfatia formosa, was named and described in 1944 by French paleontologist Camille Arambourg. A second species, T. dalmatica, was named in 1980 from the Dalmatian Coast of Yugoslavia.

Atractosteus is a genus of gars in the family Lepisosteidae, with three species. The genus first appeared in the Campanian in the Late Cretaceous.

Pattersonellidae is an extinct family of primitive ray-finned fish. It is tentatively classified under the suborder Argentinoidei of the order Argentiniformes.

The 1970–71 Algerian Cup is the 9th edition of the Algerian Cup. CR Belcourt are the defending champions, having beaten USM Alger 4–1 in the previous season's final.

Onchosaurus is an extinct genus of sclerorhynchid sawfish from the Late Cretaceous. Its fossils have been found in the Cretaceous sediments of Egypt, Morocco, France, Niger, Japan, Chile, Peru and the United States.

Amphiorycteropus is a genus of mammals in the family Orycteropodidae within Tubulidentata. The genus is known from Middle Miocene to Early Pliocene of Africa, Asia and Europe.

Protanancus is an extinct genus of amebelodontid proboscidean from Kenya, Pakistan and Thailand. The genus consists solely of type species P. macinnesi. The generic name is derived from the unrelated Anancus, and the Greek prōtos "first".

Enhydrictis is a genus of extinct mustelid, belonging to the subfamily Galictinae. The type species, and best known, is Enhydrictis galictoides from the Pleistocene of Sardinia and Corsica.