"Tomorrow Comes Today" is a song from British alternative rock virtual band Gorillaz's self-titled debut album Gorillaz and was their first release when issued as an EP in November 2000. The first three songs from the EP ended up on their debut album, however, "Latin Simone" was heavily edited, and dubbed into Spanish, for the album release. The new version was sung by Ibrahim Ferrer, and renamed "Latin Simone (¿Que Pasa Contigo?)". The original version is sung by 2-D (voiced by Damon Albarn) and appears along with "12D3" on the later-released compilation album G-Sides . The song itself was also the fourth and final single from that album, released on 25 February 2002. It peaked at number 33 on the UK Singles Chart. A demo version of the song, "I Got Law" [4] was included as a bonus track of the Japanese edition of 13 by Blur, Damon Albarn's other musical project.

Directed by Jamie Hewlett, the video for the title track consists mainly of static drawings of the band members placed against real photographs and time-lapsed video footage of London streets. Some of the drawings are animated, especially the ones featuring 2-D singing. The video finishes with the four band members, and 2-D's headache pills, flying across the screen during a fast-motion shot of a tunnel. Graffiti artwork by Banksy can be seen halfway through the video. The infamous[ according to whom? ] Trellick Tower is also seen, known for being the birthplace of Gorillaz and where creators of the band Jamie Hewlett and Damon Albarn met.

Gorillaz are an English virtual band created in 1998 by musician Damon Albarn and artist Jamie Hewlett. The band primarily consists of four animated members: 2-D, Murdoc Niccals, Noodle, and Russel Hobbs. Their fictional universe is presented in music videos, interviews and short cartoons. In reality, Albarn is the only permanent musical contributor, and Gorillaz' music often features collaborations with a wide range of featured artists. Remi Kabaka Jr. became the producer for the band in 2016 after several years of providing the voice of Russel Hobbs and was listed as an official member alongside Albarn and Hewlett in the 2019 documentary Gorillaz: Reject False Icons.

Damon Albarn is a British musician, singer, songwriter, and record producer, best known as the frontman and primary lyricist of the rock band Blur and as the co-founder, lead vocalist, instrumentalist, and primary songwriter of the virtual band Gorillaz. 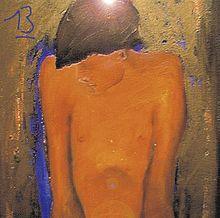 13 is the sixth studio album by English alternative rock band Blur, released on 15 March 1999. Continuing the stylistic shift away from the Britpop sound of the band's early career, 13 explores experimental, psychedelic and electronic music. 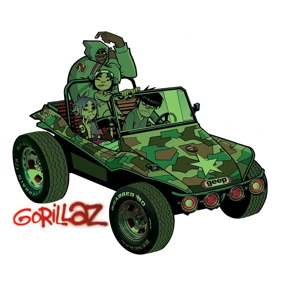 Gorillaz is the eponymous debut studio album by British virtual band Gorillaz. It was released on 26 March 2001 in the United Kingdom by Parlophone and in the United States by Virgin Records. The album reached number three in the UK and number fourteen in the US and has sold over seven million copies worldwide. The album's success earned the group an entry in the Guinness Book of World Records as the "Most Successful Virtual Band", and spawned the singles "Clint Eastwood", "19-2000", "Rock the House", and "Tomorrow Comes Today". 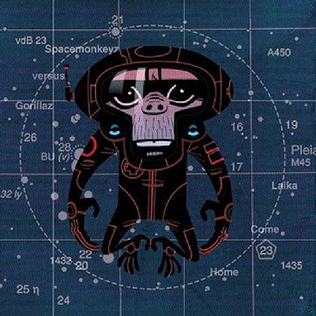 Laika Come Home is a Gorillaz remix album released in July 2002. Unlike a typical remix album, it is done by just one group, Spacemonkeyz. It contains most of the songs from Gorillaz' first album, Gorillaz, but remixed in dub and reggae style. The album features Terry Hall, U Brown, Earl Sixteen and 2-D. One single, "Lil' Dub Chefin'", was released from the album on 22 July 2002, with moderate success. The limited edition was packed in digipak, featuring two hidden tracks. In 2004, the album was packaged with 2001's Gorillaz in a box set as part of EMI's "2CD Originals" collection. The album's title is a reference to Laika, the Soviet space dog, and the film Lassie Come Home. The album contains mixes of every song on the original album except "Double Bass", "Latin Simone ", and "Rock the House". 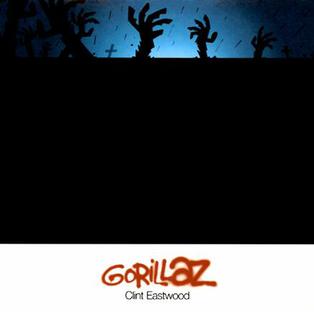 "Clint Eastwood" is a song by British virtual band Gorillaz, released as the first single from their self-titled debut album on 5 March 2001. The song is named after the actor of the same name due to its similarity to the theme music of The Good, the Bad and the Ugly. 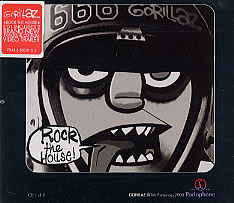 "Rock the House" is a song from Gorillaz' self-titled debut album. It was released as the third single from the album in October 2001. It peaked at number 18 on the UK Singles Chart. The song features a horn section loop sampled from "Modesty Blaise", a piece by British jazz musician John Dankworth. Rapper Del the Funky Homosapien is the only artist to provide vocals for the song.

"Lil' Dub Chefin'" is a single by Spacemonkeyz vs Gorillaz, from the 2002 Gorillaz remix album Laika Come Home. It is sung by Damon Albarn and Terry Hall of the UK ska band The Specials with the song itself being a remix of the Gorillaz song "M1 A1". The song's title is reference to the UK restaurant chain Little Chef. The music video features the Spacemonkeyz. On Phase One: Celebrity Take Down, the video had an alternative intro and credits. The single peaked at #73 in the UK Singles Chart.

Noodle is a fictional Japanese musician, singer, and member of the British virtual band Gorillaz. She provides the lead guitar, as well as some occasional lead and backing vocals for the band. Like all other band members of Gorillaz, she was created in 1998 by Damon Albarn and Jamie Hewlett. Noodle has been voiced by Japanese-English actress Haruka Kuroda, singer-songwriter Miho Hatori of trip-hop group Cibo Matto, and Japanese-English actress Haruka Abe.

Stuart Harold "2-D" Pot is a fictional English musician and member of the British virtual band Gorillaz. He provides the lead vocals and plays the keyboard for the band. 2-D's singing voice is provided by Blur frontman Damon Albarn on Gorillaz' recordings and performances; his speaking voice was provided by actor Nelson De Freitas in various Gorillaz direct-to-video projects such as Phase One: Celebrity Take Down and Phase Two: Slowboat to Hades. In 2017, Kevin Bishop was cast as the new speaking voice of 2-D. He was created by Albarn and Jamie Hewlett in 1998. 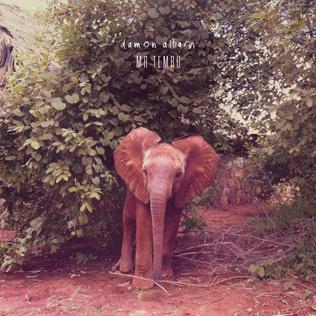 "Mr Tembo" is the fourth single released by English recording artist, songwriter and Blur/Gorillaz frontman, Damon Albarn, from his debut solo studio album Everyday Robots. Its release as a single was limited to the United States. The track features The Leytonstone City Mission Choir and contains a sample of "Lions", from the 1959 album Way Out Humor as written and performed by Richard Buckley. The track is produced by both Albarn and Richard Russell, whom Albarn had previously worked with on Bobby Womack's comeback album The Bravest Man in the Universe and on the DRC Music album, Kinshasa One Two.

"The Selfish Giant" is a song recorded by English recording artist and songwriter and Blur frontman & Gorillaz creator, Damon Albarn, from his debut solo studio album Everyday Robots. The track features Natasha Khan, known professionally as Bat for Lashes. The track is produced by both Albarn and Richard Russell, whom Albarn has previously worked with on Bobby Womack's comeback album The Bravest Man in the Universe and on the DRC Music album Kinshasa One Two. 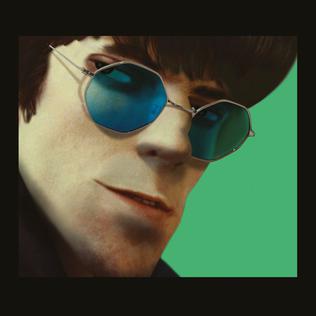 "We Got the Power" is a song by British alternative rock virtual band Gorillaz, featuring Jehnny Beth of British post-punk band Savages and backing vocals from former Oasis guitarist and songwriter Noel Gallagher and American rapper D.R.A.M., who also appears on the group's single "Andromeda". The song was released on 23 March 2017. It was released as the second single from their fifth studio album Humanz. 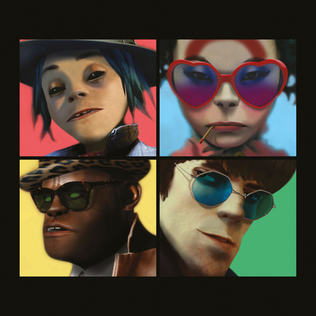 Humanz is the fifth studio album by British virtual band Gorillaz. It was released on 28 April 2017 in the United Kingdom by Parlophone and in the United States by Warner Bros. Records. The album was announced on the band's official Instagram page on 23 March 2017. According to a press release, it was recorded in London, Paris, New York City, Chicago, and Jamaica, and was produced by the band The Twilite Tone and Remi Kabaka Jr. It was the band's first studio album since 2010's The Fall, and features collaborations with Jehnny Beth, Grace Jones, Kali Uchis, Vince Staples, Popcaan, D.R.A.M., Anthony Hamilton, De La Soul, Danny Brown, Kelela, Mavis Staples, Pusha T, and Benjamin Clementine. 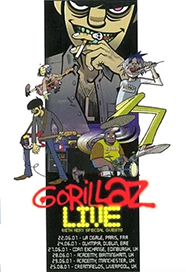 Gorillaz Live was the first concert tour by the British alternative rock virtual band Gorillaz, in support of their self-titled debut album. 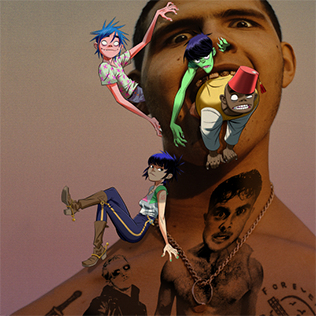 "Momentary Bliss" is a song by British virtual band Gorillaz, featuring British rapper Slowthai and the Kent-based punk rock duo Slaves. The song was the first song to be released for Gorillaz' Song Machine initiative, a web series consisting of singles and music videos released over the course of the year from the band, with each episode featuring different guest musicians on new Gorillaz material, and is the first single released for their seventh studio album, Song Machine, Season One: Strange Timez. 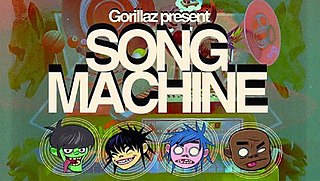 Song Machine is an audiovisual project by British virtual band Gorillaz. It is a music video web series consisting of a collection of music videos and singles that are released monthly by the band as episodes of the series, with each episode featuring additional guests. Each episode is released with accompanying interludes called "Machine Bitez", a series of skits consisting of short conversations and interviews with Song Machine's guests from Gorillaz' virtual band members. The project was officially launched on 30 January 2020. Season one of Song Machine consists of 9 episodes and was released as an album titled Song Machine, Season One: Strange Timez on 23 October 2020. Season two is expected to begin production sometime in 2021. 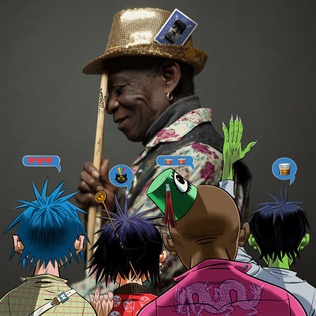 "How Far?" is a song by British virtual band Gorillaz, featuring Tony Allen and Skepta. The track was released on 2 May 2020 without any prior announcement as the fourth single for Gorillaz' seventh studio album, Song Machine, Season One: Strange Timez. It is part of the Song Machine project, a web series involving the ongoing release of various Gorillaz singles and music videos featuring different guest musicians over the course of 2020, though it is not considered an official episode of the series. The single marks the first posthumously released material featuring Tony Allen, as well as the final song to be recorded during Allen's lifetime. 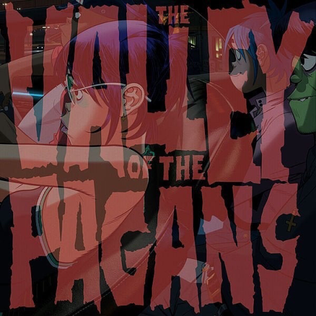 "The Valley of the Pagans" is a song by English virtual band Gorillaz featuring Beck. The track was released on 5 November 2020 as the ninth and final single for Gorillaz' seventh studio album, Song Machine, Season One: Strange Timez, and the eighth episode of the Song Machine project, a web series which involves the ongoing release of various Gorillaz tracks featuring different guest musicians over the course of 2020. 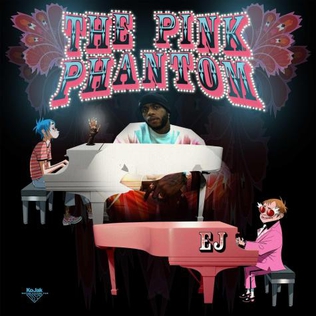 "The Pink Phantom" is a song by British virtual band Gorillaz featuring Elton John and 6lack. The track was released on 1 October 2020 as the eighth single for Gorillaz' seventh studio album, Song Machine, Season One: Strange Timez, and the seventh episode of the Song Machine project, a web series involving the ongoing release of various Gorillaz tracks featuring different guest musicians over the course of 2020.