Last updated May 21, 2020
Chinese artistic gymnast
For the actress Tong Fei, see Kimmy Tong.
This is a Chinese name; the family name is Tong.

The 2004 Summer Olympics medal table is a list of National Olympic Committees ranked by the number of medals won during the 2004 Summer Olympics, held in Athens, Greece, from 13 to 29 August 2004. A total of 10,625 athletes from 201 countries participated in these games, competing in 301 events in 28 sports. Kiribati and Timor Leste competed for the first time in these Olympic Games.

Shen Xue is a Chinese pair skater. With her partner and husband Zhao Hongbo, Shen is the 2010 Olympic champion, the 2002 & 2006 Olympic bronze medalist, a three-time World champion, a three-time Four Continents Champion, and a six-time Grand Prix Final champion.

Zhao Hongbo is a Chinese pair skater. With his partner and wife Shen Xue, Zhao is the 2010 Olympic champion, the 2002 & 2006 Olympic bronze medalist, a three-time World champion, a three-time Four Continents Champion and a six-time Grand Prix Final champion.

Cheng Fei is a retired Chinese gymnast. She is a three-time World Champion on the vault (2005–2007) and 2006 World Champion on floor exercise. She was a member of the gold medal-winning Chinese teams for the 2006 World Artistic Gymnastics Championships in Aarhus, Denmark and 2008 Olympic Games in Beijing, China. She was also a member of the silver medal-winning Chinese team for the 2007 World Artistic Gymnastics Championships in Stuttgart, Germany.

Tong Jian is a Chinese pair skater. With partner and wife Pang Qing, he is the 2010 Olympic silver medalist, 2006 and 2010 World Champion, a five-time Four Continents champion and the 2008 Grand Prix Final Champion.

Pang Qing is a Chinese pair skater. With partner and husband Tong Jian, she is the 2010 Olympic silver medalist, the 2006 and 2010 World Champion, a five-time Four Continents champion and the 2008 Grand Prix Final Champion. 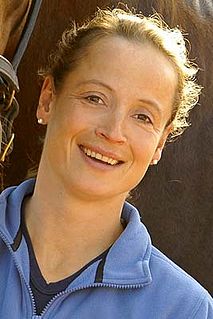 Isabell Werth is a German equestrian and world champion in dressage who competed in the Olympics five times winning ten medals, six of them gold. She holds the record for the most Olympic medals won by any equestrian athlete. In 2009, she was suspended from all tournaments by the International Federation for Equestrian Sports (FEI) for six months for horse doping.

Liu Yong is a former international level badminton player for China who specialized in mixed doubles.

Yuri Nikolaevich Korolyov, born August 25, 1962 in Vladimir, Russia is an artistic gymnast who competed for The USSR during the 1980s, winning many World and European Medals. Part of a deep Soviet team that, throughout the 1980s, featured such names as Dmitry Bilozerchev, Valeri Liukin, Vladimir Artemov, Valentin Mogilny and others, Korolyov still managed to distinguish himself for the greater part of the decade by becoming World All-Around Champion in 1981 and 1985, as well as being World Cup All-Around Co-Champion in 1986, among many other titles and medals.

China was the host of the 2008 Summer Paralympics, held in Beijing. China's delegation included 547 people, of whom 332 were competitors. The athletes, 197 men and 135 women, ranged in age from 15 to 51 and competed in all twenty sports. 226 of the competitors participated in the Paralympic Games for the first time. The delegation was the largest in Chinese history and at the 2008 Games. China topped the medal count at the 2004 Summer Paralympics in Athens. China dominated the medal count winning the most gold, silver, bronze, and total medals by a wide margin in Beijing.

Lai Chun Ho is a track and field sprint athlete who competes internationally for Hong Kong.

Michael Jung is a German equestrian who competes in eventing. A three-time Olympic gold medallist, he won individual and team gold at the 2012 London Olympics, followed by individual gold and team silver at the 2016 Rio Olympics. He was inducted into the Eventing Rider Association Hall of Fame in 2013, and in 2016 he became only the second rider in history to win the Grand Slam of Eventing.

Xu Jiayu is a Chinese competitive swimmer who specializes in the backstroke. He is the Olympic Silver medalist and twice consecutive world champion in the 100 meters backstroke.

New Zealand is expected to compete at the 2020 Summer Olympics in Tokyo. Originally scheduled to take place from 24 July to 9 August 2020, the Games have been postponed to 23 July to 8 August 2021, because of the COVID-19 pandemic. It will be the nation's twenty-fourth appearance as an independent nation at the Summer Olympics, having made its debut at the 1920 Summer Olympics in Antwerp and competed at every Games since.