Tony Friel (born in Birkenhead, Wirral, Cheshire, 4 May 1958) [1] is an English bass guitarist, known for his role in different new wave bands.

He attended Heys Boys Secondary School, where he met Martin Bramah and attained an art O-Level. He and Bramah shared many interests. In the mid-1970s, they were introduced by their friend Barbara Smith to her brother Mark E. Smith and his friend Una Baines. Smith, Baines, Bramah and Friel shared interests in music, and formed their first band, the Fall. [2] Friel remained until December 1977, then he left.

After the Fall, Friel formed a project called Contact and a band called the Passage. In late 1978, he and his former Fall bandmate Karl Burns joined the Teardrops, a group which included Buzzcocks bassist Steve Garvey. They released the Leave Me No Choice EP, and in 1980, the Final Vinyl album, before breaking up.

In subsequent years Friel played with R&B bands. Later he was member of the Woodbank Streetband. [1] 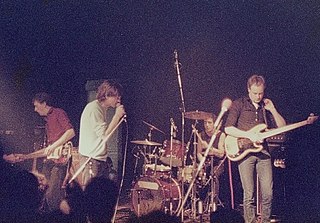 The Fall were an English post-punk group, formed in 1976 in Prestwich, Greater Manchester. They underwent many line-up changes, with vocalist and founder Mark E. Smith as the only constant member. The Fall's long-term musicians included drummers Paul Hanley, Simon Wolstencroft and Karl Burns; guitarists Marc Riley, Craig Scanlon and Brix Smith; and bassist Steve Hanley, whose melodic, circular bass lines are widely credited with shaping the band's sound from early 1980s albums such as Hex Enduction Hour to the late 1990s. 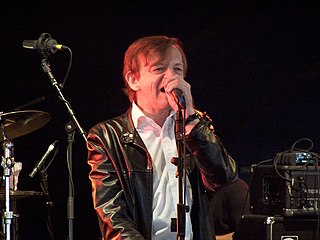 Mark Edward Smith was an English singer and songwriter, who was the lead singer, lyricist and only constant member of the post-punk group the Fall. Smith formed the band after attending the June 1976 Sex Pistols gig in Manchester and was its leader until his death. During their 42-year existence, the Fall's line-up included some 60 musicians with whom Smith released 32 studio albums and numerous singles and EPs.

Guadalcanal Diary was an American alternative jangle pop group. They originated in Marietta, Georgia, a suburb of Atlanta, but they were often billed as being "from Athens, Georgia," in the early 1980s. The band formed in 1981 and disbanded in 1989. They reformed in 1997, but never recorded any new material. After going on hiatus in 2000, Guadalcanal Diary temporarily reunited for a second time in 2011 for Athfest, where they celebrated their 30th anniversary. 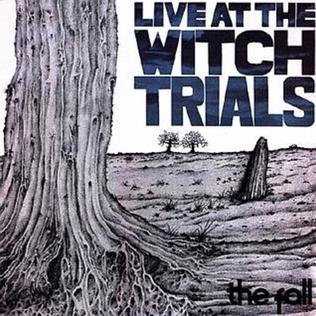 Live at the Witch Trials is the debut studio album by The Fall. It was released on 16 March 1979, through record label Step-Forward. It is not, despite its title, a live album and was recorded in a studio in a single day and mixed by producer Bob Sargeant.

Liverpool 78 is a live album by the Fall, first released June 4, 2001. These tracks have subsequently been reissued as part of an expanded Live at the Witch Trials. The recording has historic interest but the sound quality is very poor.

Karl Burns is a British musician best known as drummer for the Fall, featuring in many incarnations of the band between 1977 and 1998. 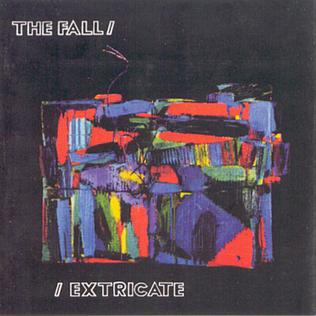 Extricate is the 12th album by post-punk band the Fall. It was made immediately after bandleader Mark E. Smith divorced guitarist Brix Smith. Brix's departure helped define the sound of this album: her background vocals and relatively pop-oriented guitar, which had become mainstays of The Fall, are noticeably absent in this release. In one of the more unusual events in the group's career, she was replaced by founding former member Martin Bramah, who had previously left the group in 1979 to form his own group Blue Orchids.

The Passage were a post-punk band from Manchester, England, who appeared on several record labels including Object Music, Cherry Red Records, and their own label Night & Day, a subsidiary label to Virgin Records.

Live 1977 is a live album by the Fall, first released in March 2000. Although the sound quality is poor and live documents of the Fall are plentiful, this album is of particular note as it is the earliest available recording of the group performing, apart from two tracks on the Short Circuit: Live at the Electric Circus compilation. It dates from December 1977, about six weeks after the group had recorded their debut single "Bingo-Master's Break-Out!". It is the only release on which the early song "Hey! Fascist" may be heard, though it was reworked as "Hey! Student" and released on Middle Class Revolt 17 years later. Live 1977 also contains very early versions of the 1984 single and "Oh! Brother" and the song "Cop It", later found on The Wonderful and Frightening World Of... but retitled "Copped It". The group’s reworking of "Louie Louie", with John the Postman, is featured only on this recording. This was Tony Friel’s last performance with the band. After a couple of short-stay replacements, his place as bassist was taken by Marc Riley.

Una Baines is best known as the keyboard player in the first line-up of British post-punk/new wave band the Fall. Her feminist viewpoint helped shape the band's early political stance and she was one of the very few Fall members, other than frontman Mark E. Smith, who contributed lyrics to the group’s songs.

Stephen Hanley is an Irish-born English musician who grew up in and lives in Manchester, He is best known as the bass guitarist in the Fall from 1979 to 1998. His distinctive and muscular basslines were a signature part of their sound, often carrying the songs' instrumental melodies. He is currently a member of Brix & the Extricated with guitarist and vocalist Brix Smith Start.

Martin Beddington, better known by his stage name Martin Bramah, is an English singer-songwriter and guitarist, best known as a founding member of the Fall, Blue Orchids, Thirst, and Factory Star.

Spherical Objects were an important representative of the Manchester, UK-based experimental independent post-punk scene of the late 70s. All these bands were hosted under the Object Music record label. Many of them shared musicians, thus the movement looked more like a musical collective.

4 Tunna Brix is an EP by the alternative rock group Sonic Youth, released in 1990. It comprises four songs recorded by the BBC in 1988 for John Peel's radio program – three covers of the Fall and one ("Victoria") of the Kinks. The title referenced former Fall guitarist Brix Smith.

Stephen Garvey is a musician who is known for being the bass guitarist of the punk band Buzzcocks, forming part of the classic line-up of the group, from 1977 to 1981, and, again, from 1989 to 1992.

The Teardrops were an English punk/new wave band formed in Prestwich, Greater Manchester, England, in 1978. The founders and always the core of this band were Trevor Wain, John Key and Jimmy Donnelly with various good friends from the Prestwich music scene:- Buzzcocks bassist Steve Garvey, members of The Fall; Martin Bramah, Karl Burns and Tony Friel and former member of V2 Ian Nance, as well as occasional contributions from Dave Brisbane, Helen Harbrook, Dave Price and Rick Goldstraw.

Bingo-Master's Break-Out! is the debut EP by English post-punk band The Fall. It was released on 11 August 1978 through record label Step-Forward.

The Remainderer is an EP by the Fall, released on 9 November 2013. It features five new songs by the group and a medley of two Gene Vincent covers, "Say Mama" and "Race With the Devil". The title track was previously played live. Curiously, "Race With the Devil" is not a new recording, but a live performance recorded at the John Peel's 50th-anniversary concert back in 1989 with the Extricate lineup; this recording had previously appeared on The Fall Red Box Set 1976-2007. The last song, "Touchy Pad" features Tamsin Middleton of Manchester band Mr Heart on vocals. The release was explained as a bridging point by the record company. The vinyl version features earlier mixes that differ from the CD. The release was followed by a number of live-shows.