Tony Valeri, PC (born August 11, 1957) is a former Canadian politician. Valeri was the Government House Leader in Paul Martin's government from 2004 until 2006. He was narrowly defeated by New Democratic Party (NDP) candidate Wayne Marston in the 2006 general election held on January 23, 2006.

Valeri grew up in Hamilton's north-end in the working class Barton and Sherman neighbourhood, the son of Italian immigrants Enzo and Maria Valeri, who arrived in Hamilton in the early 1950s. He graduated from Bishop Ryan High School and then attended McMaster University, earning a BA in Economics. Prior to his political career, Valeri served as President of Canadian Financial Group Ltd. Valeri represented the ridings of Lincoln (1993–1997), then Stoney Creek (1997–2004) and Hamilton East—Stoney Creek (2004–2006). Valeri lives with his wife Terri and children, Anthony and Luca in Stoney Creek.

Valeri first ran for office in the 1993 election, winning the Liberal Party nomination over former cabinet minister John Munro, and easily won in the Liberal sweep of Ontario. Valeri served as a backbencher and was appointed Parliamentary Secretary to the Minister of Finance in 1997. He was appointed to the Cabinet on December 12, 2003, by incoming Prime Minister Paul Martin. Valeri is known for his close ties to industry and business, and his appointment to the transport portfolio was viewed positively by this group. He was also known as a supporter of the Red Hill Valley Parkway.

In 2004, the decennial redistribution process took place and Valeri's old riding of Stoney Creek, which straddled the border between Hamilton and Grimsby, was split in two. A part of Valeri's Stoney Creek riding was merged with a part of Hamilton - East. A slight majority of the constituents of the new riding of Hamilton East - Stoney Creek were from Valeri's former riding. Although the other Hamilton-area Members of Parliament shifted to the eastward half of their ridings, in Valeri's case this would have meant shifting from a suburban Hamilton riding to the rural Niagara West—Glanbrook riding, where he would have faced a difficult battle with a candidate of the Conservative Party of Canada.

He therefore decided to run in the western half of his former riding, resulting in a passionate nomination battle with former cabinet heavyweight and party leadership candidate Sheila Copps. Some accused Martin of orchestrating these events to try to expel the left-leaning Copps from the House of Commons. Copps pointed out that Valeri lived in the Niagara West-Glanbrook riding that also included around 43% of his old constituents and an airport, the latter which complemented his Transport Ministry. In response, Valeri pointed out that Copps no longer lived in Hamilton, no Member of Parliament enjoyed any entitlement to any constituency without a nomination meeting and the majority of the constituents of Hamilton East—Stoney Creek in fact originated from his Stoney Creek riding. On March 6, 2004, Valeri won the nomination by 311 votes. Stelco's economic troubles and the large pension deficit galvanized support for New Democratic Party (NDP) candidate Tony DePaulo in Hamilton East—Stoney Creek. The conflict with Copps, public reaction to the first budget of the Ontario Liberals, as well as the government's sinking fortunes, almost cost him his seat, but he was narrowly (less than 1,000 votes) re-elected on June 28, 2004.

On July 20, 2004, he was appointed to the sensitive position of Government House Leader in Paul Martin's minority government. Valeri's appointment to the position of House Leader was originally questioned by many, however Valeri was able to establish a working relationship with his counterparts.

As noted by Libby Davies, NDP House Leader, "We had some crazy moments but we always got down to business in a real way. It was a pleasure to work with (Valeri)." Former Conservative House Leader John Reynolds noted that "Tony was a great House Leader. A man of integrity and good humour."

In his 2008 memoir, entitled Hell Or High Water: My Life In And Out of Politics ( ISBN   0771056923), former Prime Minister Paul Martin labeled Valeri as “one of the most gifted House Leaders of recent times.”

On January 23, 2006, Valeri was narrowly defeated by a margin of less than 500 votes by the New Democratic Party candidate Wayne Marston. During the election, the Hamilton Spectator reported that Valeri had purchased a property for $225,000 only to later sell it to a Liberal supporter for $500,000 a few months later. While Valeri insisted that the Ethics Commissioner had cleared the transaction, lingering doubts about the sale remained.

After his election defeat, Valeri established a public affairs and strategic consulting business and held a residence position within the DeGroote School of Business at McMaster University.

Given the very narrow margin of his defeat in the 2006 election, some had speculated that Valeri would seek a return to politics in the Hamilton East—Stoney Creek riding. At the Gala Tribute held in his honour, Valeri indicated that he wants to continue to serve the people of Hamilton and Stoney Creek, leaving open the option of a return to federal politics.. However, on April 15, 2007, former Hamilton mayor Larry Di Ianni was nominated as the Liberal candidate for Hamilton East—Stoney Creek for the next federal election, precluding a rematch between Valeri and Marston at least for now.

As of June 2011, Valeri has held the position of Vice President Public Affairs at ArcelorMittal Dofasco in Hamilton.

Since leaving public office Valeri remained actively involved in the community. Valeri is the past Chair of the St. Joseph’s Hamilton Healthcare Board of Trustees, a Director on the Board of the Canadian Manufacturers and Exporters and a member of the McMaster Board of Governors.

Ottawa Centre is an urban federal electoral district in Ontario, Canada, that has been represented in the House of Commons of Canada since 1968. While the riding's boundaries have changed over the years to account for population changes, the riding has always comprised the central areas of Ottawa, the nation's capital.

The period between Paul Martin's assumption of the leadership of the Liberal Party of Canada and the announcement of the 2004 federal election which saw a considerable amount of infighting within the party. The divisions in the Liberal Party, the party's embroilment in the Sponsorship Scandal, and a united Conservative opposition, all combined to end 12 continuous years of Liberal rule.

David Christopherson is a Canadian politician. From 2004 until 2019, he represented the riding of Hamilton Centre in the House of Commons of Canada. He previously served in the Legislative Assembly of Ontario from 1990 to 2003, and was a cabinet minister in the provincial government of Bob Rae. Christopherson is a member of the New Democratic Party.

The Rat Pack was the nickname given to a group of young, high-profile Canadian Liberal opposition Members of Parliament during the Progressive Conservative government of Prime Minister Brian Mulroney. 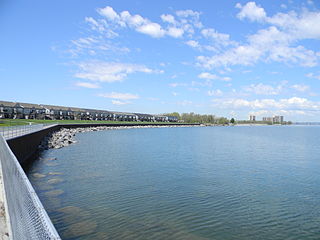 Stoney Creek is a community in the city of Hamilton in the Canadian province of Ontario. It was officially a city from 1984 to 2001 when it was amalgamated with the rest of the cities of the Regional Municipality of Hamilton-Wentworth.

Brad Clark is a Canadian former politician in Ontario, Canada. He was the councillor in Ward nine in Hamilton, Ontario from December 2006 to December 2014. He was a Progressive Conservative member of the Legislative Assembly of Ontario from 1999 to 2003, and was a cabinet minister in the governments of Mike Harris and Ernie Eves. In the 2018 municipal elections he again won councillor in Ward nine in Hamilton Ontario defeating Doug Conley.

Elizabeth "Beth" Phinney is a Canadian former politician. She was a member of the House of Commons of Canada from 1988 until her retirement in 2005, representing the riding of Hamilton Mountain in Ontario for the Liberal Party.

Hamilton Mountain is a federal electoral district in Ontario, Canada, that has been represented in the House of Commons of Canada since 1968. The riding is located in the Hamilton, Ontario region.

This is page shows results of Canadian federal elections in Hamilton, Burlington, and Niagara Region.

Eric Gordon Cunningham was a politician in Ontario, Canada. He was a Liberal member of the Legislative Assembly of Ontario from 1975 to 1984. 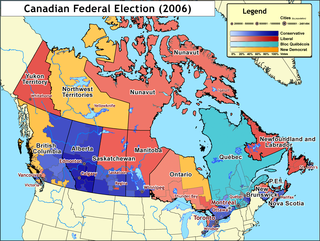 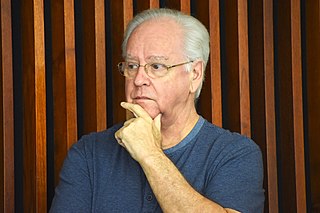 Politically, Hamilton is known for producing groundbreaking, colourful and left-wing politicians. Locally, though, the big political stories have included the controversial amalgamation of Hamilton with its suburbs in 2001, the destruction of green space around the Red Hill Valley to make way for the Red Hill Creek Expressway, and plans to build a Light Rail Transit line in the city.

Paul Miller is a politician in Ontario, Canada. He is a New Democratic member of the Legislative Assembly of Ontario who was elected in the 2007 provincial election. He represents the riding of Hamilton East—Stoney Creek.

John James "Jack" Harris is a Canadian lawyer and politician from Newfoundland and Labrador. Harris is the New Democratic Party (NDP) Member of Parliament for St. John's East. He represented the riding from 1987 to 1988 and again from 2008 to 2015, when he was defeated, before winning the seat again in the 2019 Canadian federal election. He is currently the only NDP member of the House of Commons from Atlantic Canada. Harris is also the former leader of the Newfoundland and Labrador New Democratic Party (1992-2006).

The 2011 Ontario general election took place on Thursday, October 6, 2011 to elect members of the Legislative Assembly of Ontario, Canada.

The 2018 Hamilton municipal election occurred on October 22, 2018, as per the Ontario Municipal Elections Act, 1996. Electors in Hamilton selected one Mayor, members of the Hamilton, Ontario City Council and members of both English and French Public and Catholic School Boards.